Posted on by Pete Wilson

Across the Deepest Canyon

In early spring of 1953, my Uncle Allen and Aunt Hazel needed to have a small herd of horses moved across the Snake River in Hells Canyon. They had sold their ranch at Granite Creek on the Idaho side of the canyon and bought a ranch on the Imnaha River in Oregon, eighteen miles south of the town of Imnaha. It was decided that my cousin Kim and I would trail ten or so horses through the deepest canyon in the U.S. to the new ranch. Kim had turned fifteen that January and I would be fifteen in June. We were both finishing our freshman year of high school at Riggins, and our parents had allowed us out of school a week early to do the job.

Growing up, I had stayed with Uncle Allen, Aunt Hazel, and Kim at their summer range cow camp in Idaho’s Seven Devils Mountains, so I had learned to ride and was comfortable on a horse. From the age of four, Kim had ridden all kinds of trails and conditions at their Hells Canyon ranch. That experience, along with the cockiness of young teenagers, made us confident we could trail the herd to Oregon.

Uncle Allen and Kim picked me up at home. From Riggins we drove twenty-nine miles north to White Bird, and then up onto Banner Ridge, where Uncle Allen had rented pasture for the horses. It was around mid-morning of a beautiful spring day when we arrived at the pasture. We saddled our two riding horses, opened the gate, and were off! Kim went first and I followed, leading one horse as the rest trailed along, down the gravel road off the ridge. Uncle Allen drove away in his 1947 truck, a flatbed with stock rack, and we didn’t see him again until we had moved the animals about twenty miles to the Snake River at Pittsburg Landing. 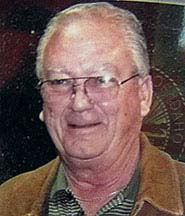 Pete Wilson grew up in Riggins, attended the University of Idaho, and graduated from George Washington University in Washington, D.C., via night school while working days for U.S. Senator Len B. Jordan. After graduation, he returned to Boise and had an enjoyable thirty-one-year career with Boise Cascade Corp. Now retired, Pete lives in Boise with his wife Sharon.
View all posts by Pete Wilson →