Where the Big Horns Draw Crowds

In Nampa, we used to hold Tuba Christmas at the Karcher Mall, where people would listen to the live concert as they wandered around shopping. When we moved the venue to the then-new Nampa Public Library in 2015, we weren’t sure what kind of audience we’d have or the reception they’d give us. But when we arrived at the library that first year, so many people were waiting that we had to move them back to make enough room to seat our performers. It’s been a packed house there ever since. The library has an extensive lobby where our musicians set up. Two floors rise above it, with small glass walls over which spectators can see the performers. I think the third floor is best, because the tuba bells point upward, and the sound rises.

Perhaps I should explain Tuba Christmas. Now held annually in more than two hundred cities in the US and around the world, it was inspired by William Bell, generally regarded as the first tuba virtuoso. Harvey Phillips has likewise had an impressive career. Referred to as “the Paganini of the Tuba” or simply as, “Mr. Tuba,” he was inspired to create Tuba Christmas as an annual event to honor his former teacher, William Bell, and to further the legacy of all artists/teachers of the tuba family of instruments. 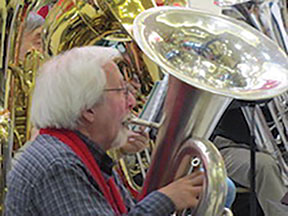 Ray James is a former band director who still enjoys playing in various groups in the Treasure Valley area.
View all posts by Ray James →
ORDER BY MAIL