The Legacy of Louis Peck

A memory comes rushing into my mind with goose bump-producing clarity. Louis Peck stares at me, his hands scrunched into the pockets of the apron he always wore in painting class. Pushing his heavy black-framed glasses back on his nose, he looks me in the eye and says, “You know, Walker, if you think about it . . . nothing is completely functional . . . unless it is beautiful.”

For me, this is a seminal moment, when a master educator and mentor imparts common sense philosophy to his student. I’m so taken aback by the strength of the memory that I say out loud, “Wow! Thank you, Dr. Peck.”

What prompted that vivid recollection was my first sight of the architectural design for the new Center for Visual Arts Building (CVA) on the Boise State University campus. The building, officially unveiled in September, perfectly personifies my old teacher’s philosophy. It’s a structure I’m sure he would love and embrace if he were here to see it.

I first met Louis Peck in 1962, when he chaired the Boise Junior College (BJC) Art Department, which consisted entirely of him, Lavar Steele, and a few art rooms. He rose from humble country roots. Born and raised in Shoshone, he started teaching at BJC in 1955 and continued with that institution over a thirty-five-year career, as it changed to Boise College, to Boise State College, and finally to Boise State University. At one point, he was by far the most well-known landscape painter in Idaho. His paintings are both easily recognizable and reflective of his grassroots-Idaho background. 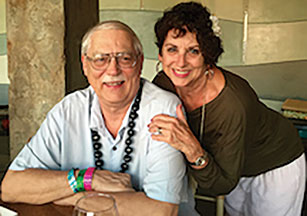 James Walker began his art journey in 1962, when he announced to professor Louis Peck that he wanted to be an artist. Jim, shown here with wife Renée, has been a graphic artist, production manager, art director, university graphics designer, senior designer, author, book designer, publisher and volunteer for DrPeckLegacy.com.
View all posts by James Walker →
ORDER BY MAIL