Beauty Sudden As a Waterfall

The country we were traversing is all that can be imagined of desolation. A region of appalling sterility and loneliness. The wild sage whose ash-colored leaves do not even mock the semblance of verdure, covers arid plains through which the few streams find their way. Amid this vast monotony, the cataract has thus escaped intrusion and almost discovery.

We followed the bluff, riding sometimes through sand, sometimes over naked black basalt, towards the fall. Its vicinity was unheralded even by the sound which lost itself in the depth of the chasm, and as we rose the edge of the gulf facing it, and the view broke suddenly upon us, a shout burst involuntarily from the party. It needed no second glance to tell us that, after Niagara, none upon the continent equaled it. The Snake River, a majestic stream both in width and volume, enclosed within the walls of columnar basalt, here sweeps round an enormous pile of rock jutting from its southern bank, and falls by several cascades into a broad smooth basin. Broken just enough to add grace to the majesty of its descent, it thundered down a precipice of one hundred and eighty feet perpendicular.

As representing the sovereignty of Uncle Sam, for the first time present at this point of dominion, [we] baptized the cataract by the name of Shoshone Falls. A superb rainbow spanned the base of the cataract, and an eagle which had its nest on a detached column of rock, was wheeling through the spray that rose from the abyss.

—“Description of the Great Shoshone Falls on the Snake River,” by George Gibbs, The Evening Post (New York), March 1858.

Early on the Sunday before Labor Day 2014, our family loaded up the largest self-drive moving van the company would let me have, attached one of our cars to the back, and made a lumbering trip from Reno to Twin Falls. My spouse followed in our big SUV with four of the five children (Archer, Addie, Cameron, and Hayden) aboard and another trailer attached (Mitchell rode with me in the van). It was no small task to move a family of seven. When we finally started to see the green fields and homes at the south end of the valley, we were tired and more than a little stressed. It was an unassuming entry to our new home. 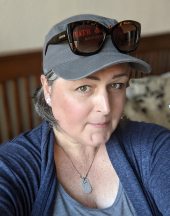 Emily ("Em") English is a technical writer and educator at the College of Southern Idaho. She is married and a proud co-parent of five children and a min-pin named Pepper. Currently, she is obsessed with collecting sand from Idaho’s beautiful places to go along with a collection from national and state parks.
View all posts by Em English →
ORDER BY MAIL