Posted on by Alessandro Meregaglia

His Manuscript Brought to Light

An unpublished manuscript titled the Boise Guide, written under the aegis of the Federal Writers’ Project (FWP) by renowned Idaho author Vardis Fisher, sat in a box in Washington, D.C. for almost eighty years until its discovery in August 2018 by Boise State University archivist Alessandro Meregaglia. In 1935, Fisher was named director of the Idaho Writers’ Project as part of the FWP, which in turn was part of the federal Works Progress Administration. In 1935-36, Fisher wrote a guidebook titled Idaho: A Guide in Word and Picture. It was published, followed by Idaho Encyclopedia and Idaho Lore, all under the FWP. But when it came to the Boise Guide, Fisher couldn’t find a sponsor, which was required by FWP rules. In November 1939, he resigned as the Idaho project’s director without having secured a sponsor for the Boise Guide. That was the end of it, until Alex ventured to Washington D.C. and resurrected the manuscript. It will be published this month for the first time by Rediscovered Publishing of Boise. Following are Alex’s account of the discovery and excerpts from Vardis Fisher’s text, published with permission.

If it weren’t for a few clues that hinted at its existence, the manuscript may have stayed hidden in a box for eighty more years. Requiring an archival expedition, the path that led to the manuscript’s discovery started with my research into Caxton Printers of Caldwell, founded in 1907. As an archivist at Boise State University, I was intrigued by Caxton’s history as a publisher in the West who competed successfully against Eastern publishers. Through my research, I looked into Caxton’s long involvement with Fisher and the FWP books about Idaho, all of which Caxton published.

Reading about the history of the Idaho Guide in Jerre Mangione’s The Dream and the Deal, I first learned about unpublished manuscripts produced by the FWP. There, on page 370, was a footnote with a revealing quotation from Vardis Fisher: “At the time of my resignation, I had three more books in manuscript, two large and one small . . . I have no idea where these manuscripts are—buried somewhere, I assume, under the monstrous bureaucracy in Washington.” 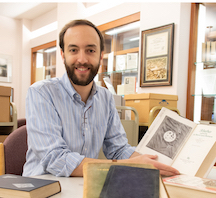