By Sue Paul with Amaura Mitchell

Todd Carlson is one of many speakers we’ve had at the Kilroy Coffee Klatch, a group that has gathered monthly since 2001 at the Warhawk Air Museum in Nampa to talk about veterans’ issues and experiences. Todd is a recurring favorite who describes his time as a guard at the Tomb of the Unknown Soldier at Arlington National Cemetery. A 1986 Meridian High School graduate, he watched over the monument from 1988-89 while serving in the U.S. Army.

The museum, which I cofounded, has posted a video on our website of Todd speaking. In it, he tells about being a senior at Meridian High, not really knowing what he was going to do. He met an Army recruiter on campus who asked what interested him and Todd said “music.” The recruiter told him every post has an Army band and if he passed an audition, he could get paid for being a musician. Todd liked this idea, and joined up.

He loved boot camp and the military. Then he was sent to a six-month musical conservatory, which he hated. “There was a drill sergeant-type person forcing me to practice my instrument,” he said. “These drill sergeant-type people were actually musicians, pretending to be drill sergeants.” After three miserable months, he failed a test and volunteered for the infantry. “I had to call home and tell my parents I failed out of the music program. That wasn’t a fun phone call. So, big failure in my life, I guess you could call it. I kind of call it a redirection.” 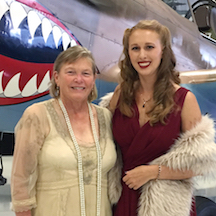 Sue Paul and her husband John founded the Warhawk Air Museum in 1989 and she served as its executive director for twenty-six years. She is a pilot and member of The Ninety-Nines, a women’s flying organization founded by Amelia Earhart. Amaura Mitchell (pictured right) works with the Warhawk Air Museum as designer, website manager, and blogger.
View all posts by Sue Paul →
ORDER BY MAIL