You Are Not Forgotten

Posted on by John J. O'Hagan

As a native of the West and history enthusiast, I have always been fascinated by the grim living circumstances of those who paved the way for our comfortable lifestyle. Recently I was reminded that those early pioneers not only lived but quite often died under grim circumstances, and frequently were buried under the most meager of monuments. It was while doing research for a book that I uncovered the fascinating tale of almost 130 unmarked graves in the Catholic section of Boise’s Morris Hill Cemetery.

All those graves were for Basques, who ranged in age from infants to ninety. The cemetery records revealed several names that are still very prominent in Boise today, and there was one “unknown sheepherder.” I think concern about the lack of marking on these graves was even more acute because the people were Basques, who are an extremely religious, close, and family-conscious people. It was a wrong that cried for remediation.

The history of the western United States is pockmarked with unnamed graves. It has been suggested that for every mile of the Oregon Trail, there is a grave. While most of those graves originally had some sort of crude marker, they were not monuments that would long withstand time and weather in the deserts and mountains. Today almost all those graves are impossible to identify. 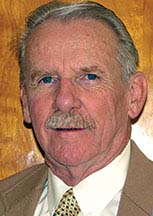