From Wasteland to Wetland

Adventures in Restoration By Mary Terra-Berns You have got to be kidding me,” I said to myself as I scanned the absolute mess just off Highway 2, about a mile east of Priest River. In the summer of
READ MORE

When It was Really Cold By Marylyn Cork Photos Courtesy of Marylyn Cork As I walked into my Priest River pharmacy on a snowy day during Christmas week 2015, a longtime resident greeted me with a beaming smile
READ MORE

The Hunt Is Personal

I’m almost forty. I feel much younger, but realize I am not. I love the hunt, chasing whitetails with my dad in the steep, green mountains of northern Idaho. I respect the game, and to me harvesting a deer is personal. Continue reading →

She Made a Difference

My friend Diane Mercer was a little bit of a thing, a petite bundle of energy and know-how, as busy as a hummingbird. From the time she took up residence in my hometown of Priest River in 1986 until she died twenty-eight years later, the projects and activities she took on for the betterment of the community, while also operating a business of her own, were truly amazing. Continue reading →

A few months shy of the first anniversary of the eruption of Mt. St. Helens, an event that affected the central Washington town where I lived, I persuaded a friend to accompany me on a road trip to northern Idaho, where I’d been invited for a job interview.

It was the spring of 1981, and news of the attempted assassination of Ronald Reagan filled the interior of my small car as we pulled up in front of the Sandpoint Bee’s office. Inside, reporters scrambled for a local angle on the news.

At that point, my only experience in journalism was an internship on a paper in Moses Lake, Washington. I was a late bloomer—thirty-eight, and the mother of three teenaged kids. After two hours with editor Bruce Botka, he offered me the job, but added, “By the way, would you mind driving another twenty miles northeast to visit the Priest River Times’ office?” Continue reading →

Stories of relocating to Idaho always seem to end with big smiles and the stars aligning for people coming back to their roots or moving to the state.

Living happily ever after seems to be the name of the game. I wish my story had the happy ending. It didn’t, but it did have many happy memories and learning experiences that will always be part of me.

My story did not involve going back to my family roots. I had a great grandfather who lived in Idaho for awhile but when his home burned down, he left. Maybe I missed a message there. I moved to Priest River in July 2012, having sought out and been offered the job as sales manager at a gun parts company in town. I moved immediately from Brigham City, Utah, and got an apartment at the top of a little rise on the corner of Main and Albeni Road, also known as US 2. At 5 a.m., the logging trucks would start heading east and they always used their compression or jake brakes right outside my bedroom window. The building would rattle in sync with the noise of the brakes. Lesson learned—always inspect a rental during the day, not in the quiet of evening. The police chief, Ray Roberts, told me the city had voted to not have a compression brake law because it was a lumber town. I got used to it, and it did not wake me after a week or two.

I had landed on the Panhandle during a very rare, extended heat wave. There was no air conditioning in the apartment or my office. I kept hearing from the old timers, “The hot days last two weeks and are over.” This one lasted a couple of long months, and not a fan or air-conditioning unit was to be had in Spokane or Coeur d’Alene. I made it through the heat wave all right, but it seemed I was the only one to actually complain about it. This reminded me of being a kid in the Fifties, when there was no central air. What does not kill us makes us stronger—or sweat a lot. Later, I found a perfectly good fan in the basement. By then temperatures were in the low twenties. Timing is everything.

During a gun show at the high school in Priest River, I bought a ball hat because I wanted to join the 21st Battalion of the North Idaho Lightfoot Militia. Where else would that seem like a good idea? A lot of my friends thought that was why I was going to northern Idaho, to hook up with militia types. Not wanting to disappoint, I purchased the ball hat, which I intended to be part of my uniform. I dutifully went to the Laclede Community Center on the night militia members were supposed to meet, but no one was there except some ladies doing aerobic exercises. Had I incorrectly written down the night they were supposed to meet? Or had they sized me up and told me the wrong time? Either way, I did not join. But I still have the hat.

There were many new experiences. Going to work at the industrial park in Priest River, I’d see the rafter of wild turkeys that worked the new grass planted for the community center. It was cool to follow the female turkeys down the road. Somehow, the ladies knew they had the right-of-way. A day without seeing the local rafter of turkeys was not as good as one when I saw them feasting on the new grass sprouts. If you are wondering about the use of “rafter” instead of “flock” or “congress,” I looked it up. I do not expect it to catch on, but it is the correct name for a group of turkeys, not flock, congress, or gang. It had to be some guy from back East who came up with that name.

After the loggers were done clear-cutting the mountain across the Pend Oreille River, the debris was set on fire. It burned in the night, lighting up the side of the mountain, and then it snowed and the piles of burning limbs created huge plumes of steam. I walked the bridge across the Pend Oreille River below my apartment, which I estimated at between 360 and 400 yards from shore to shore. For a desert-born lad, that pretty much put the zap on my brain. I could not wrap my head around that much water going that far and its name changing to the Columbia, and all of it ending up wasted in an ocean. It seemed the ocean did not need it. I did suppose the steelhead and salmon enjoyed the trip with all that water to swim in, but I still thought it was a waste.

One summer’s night, I wanted to watch a meteor shower and had a hard time finding an area that did not have trees blocking much of the sky. I ended up at the site of an old sawmill near where I worked. While I was watching for meteors and listening to the radio, a pack of coyotes or wolves started to sing along, howling for all they were worth. I turned off the radio and they quieted right down.

Three of the guys I worked with shot a deer in the parking lot of the industrial park. They were glassing for a buck on the other side of the sawmill and a doe walked right past them. Not many places where that happens. Continue reading → 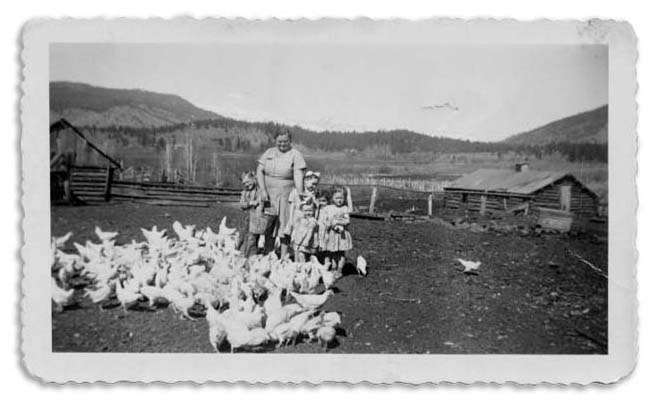 On a June day in 1982, I came home from my maternal grandmother’s funeral to find a scraggly little American Redbud tree blooming in my front yard for the first time since I’d planted it there several years earlier. The tree had been a gift from Grandma, who’d heard me say I’d like to have such a tree, and had gone out and bought it for me. It had never flourished and I’d given up on it and decided to let it die that summer. It did just that, but first it bloomed, paying tribute, I have always believed, to the memory of a remarkable woman. Continue reading →