When the Mountains Were Made

Posted on by Daniel T. Brennan / Leave a comment

A New Geological Discovery Story and Photos by Daniel T. Brennan On Easter of 2016, I sat in the living room with my grandfather, whom we all called Papa, when he unknowingly echoed Stegner’s phrase “the road has
READ MORE

I don’t know how many times I’ve fallen. Two? Twenty? But this time I’m lying face down in Victor Creek. Groping for the far bank, I stumble to my feet and find myself smiling, strangely amused at my own plight. This is what I signed up for, the adventure . . . living life. Continue reading → 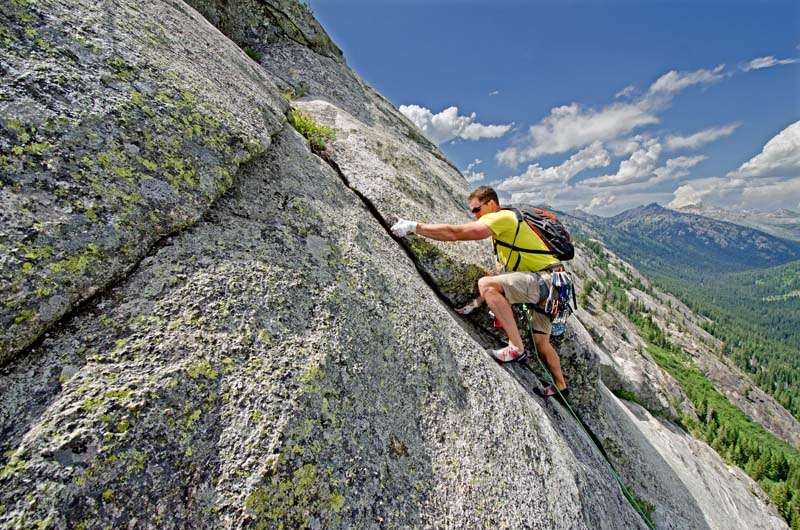 Twelve miles east of McCall, hidden in the folds of the Salmon River Mountains, lies one of Idaho’s most coveted long-climbing objectives—the thousand-foot-tall sweep of solid granite known as Slick Rock.

Here on a sunny summer day in 1967 three local climbers, Harry Bowron, Jim Cockey, and a man named Dorian (whose surname the others could not recall), set out to scale the imposing east face of this monolith. In a landscape where mountain peaks scrape the sky, deep valleys rend forested slopes and crystal clear streams tumble over boulders, this colossal swath of granite rises almost a fifth-mile and stretches nearly a half-mile in breadth.

In the nearly half-century that has passed since this first ascent of Slick Rock, the adventure and climbing experience remain much the same. On a morning in July 2011, the sun is shining brilliantly overhead as we hike the hillside that leads up to the wall. The rushing stream in the valley below echoes off the surrounding slopes, while the trail splits a thick carpet of wildflowers and verdant shrubbery. Two of our party of four have been here before, while the others are making their first pilgrimage to a “big” climb.

A gentle breeze sweeps through the towering pine forest, rustling branches, and I sense a few butterflies also rustling in stomachs. From this vantage, the sea of granite that looms above is intimidating if you have never been on a big route before.

The upper two-thirds of the wall are punctuated by three staggered, ascending cracks that split the pavement of solid stone for more than six hundred feet. These “triple cracks” seemed to provide a logical path to the summit for the first ascent party. In the late Sixties, the only reasonable possibility for protecting a climbing team on Slick Rock’s blank and seemingly featureless terrain was pitons hammered directly into these fissures.
Continue reading →