Posted on by Kelly Lance

A Whole Life in a Day

I don’t know how many times I’ve fallen. Two? Twenty? But this time I’m lying face down in Victor Creek. Groping for the far bank, I stumble to my feet and find myself smiling, strangely amused at my own plight. This is what I signed up for, the adventure . . . living life.

It’s late summer of 2013 and I’m in midst of the Idaho Mountain Trail Ultra Festival (IMTUF), a run in the Salmon River Mountains with a combined elevation gain of about twenty-two-thousand feet along its one hundred-plus miles (emphasis on “plus”) across eight passes. It starts and ends at Burgdorf Hot Springs north of McCall.

The long day begins in the early morning dark at Burgdorf with a course description given to the runners by the race’s founder and director, Jeremy Humphrey, and fellow race director Ben Blessing. The previous year, when I finished second in the IMTUF with a time just under twenty-four hours, I suggested to Jer that I would like to see what I had missed on the trail during the night. This year, the course will go in the opposite direction. I don’t know if Jer has done this to please me, but I like to think so.

I look around, recognizing several of the entrants. A border collie on a leash approaches my dog, as if to say hello.

“I’m Ann,” the woman on the other end of the leash says.

It all comes together: this is Ann Trason. Before ultra-running was known to most people, Ann had broken world records and had won the prestigious Western States 100 more than anyone else. This will be her first hundred-miler in years, at age fifty-three. Only nineteen of the thirty-one entrants will finish, and Ann will place tenth.

The stars are still out when a small crowd gathers around the runners, who are adorned with compression socks, down puffies, headlamps, arm sleeves, and hydration packs. 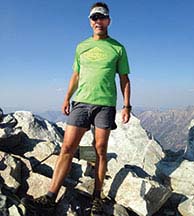 Kelly Lance is a forty-eight-year-old captain in the Pocatello Fire Department. When not being a personal assistant to his two daughters, Charlee and Robbee, he can be found in the outdoors chasing his wife Michelle, and running from old age.
View all posts by Kelly Lance →
ORDER BY MAIL