A Bite of the Backcountry

Posted on by India Caedmon

Served Up by the Dog Whisperer

To those of you who are grounded, the Aldape Pass is a dip in the mountains adjacent to the Treasure Valley—a relatively untouched stretch of land begging to be explored. But to us pilots, the Aldape Pass is a gateway into the Idaho backcountry. I enjoy flying solo. Whether it be a flight over the Rockies to scope out hidden hot springs or a day trip to the Oregon coast, being alone in the air is my favorite hobby. Another possible reason I am unaccompanied could be that in the mountains, I often find myself flying straight toward a rock face. Yeah, sane people don’t like that. Even after a detailed briefing, passengers don’t always understand that this is, indeed, standard procedure.

Meandering around the backcountry is not like flying in controlled airspace, where we have an entire library of strict elevations and traffic patterns to follow. Instead, I often have these cute little charts with dotted lines and stick figures that resemble children’s treasure maps—because I’m cool like that.

I have encountered a plethora of personalities in the wilds of Idaho. Most keep to their own, but many are handsy. And otherwise aggressive. Seriously, you crazy lady, I can run you over with my plane. Do you really want to mess with me? Unfortunately, real life isn’t an Indiana Jones movie, in which airplane props are a legit means of self-defense.

In college, I did a good job avoiding questionable people. I evaded the campus rapist who assaulted  women in front of their apartment complexes at night, and I even carried pepper spray with me—albeit  deep in my backpack, thinking nothing like that would ever happen to me.

But then in 2017, at my previous engineering job in Boise, I was sexually harassed by a coworker. The sad part was most people just watched and let it happen, making excuses like “that’s just his personality” and  “don’t take it personally.”

I stopped going hiking. What was a gym? I never meant to live life halfway or channel my inner beached whale and pack on twenty pounds of blubber, but terror consumed me. Even after that guy was fired, I completely stopped interacting with my coworkers.

Fed up with these circumstances, this series of events acted as a catalyst toward my most recent quest: owning a personal protection dog. 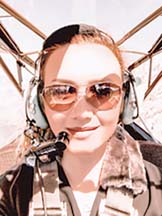 India Caedmon lives a wonderful hermit life in the mountains of Idaho. During the day, she does structural engineering. In her spare time, you can find her flying in the Sawtooths, paddle-boarding with her dogs on the Snake, doing yoga, hiking, or writing her next book.
View all posts by India Caedmon →
ORDER BY MAIL