Return to the Pioneers

Story and Photos by Daniel Mathis

I was maybe seven or eight years old the first time we went to Green Lake. Everyone got burned by the sun but the trip was a success. We had a great lunch on the shore. My uncle, who helped to be a father figure since my real father was rarely around, took a lot of photographs, as he always did, and led the way. We caught some fish and the whole family had a great time. I went there many summers with my family after that. When I went to high school, I got busy wasting time and stopped going to the lake. My uncle passed away not long after I graduated and his ashes were spread at the lake he loved so much. I never returned after that, not because I didn’t care but because I didn’t know how I would feel being back. Even so, something important to me had been left up there that I needed to see, and last summer the urge got strong enough to carry me back. I decided to bring along two friends to experience this hidden gem and hopefully catch a few fish while I made sure that what I sought was still there.

Green Lake is a high mountain lake in central Idaho not easily accessed. It is an almost two-hour drive on dirt roads, followed by a short, steep hike. The entire drive can be done in a 4WD vehicle, preferably one that is dented, scratched, a little rusty, and driven by a brave soul as you leave the main road. But most sensible people do it on ATVs. Neither of my friends had been to the lake and there were a few wide-eyed looks from them on the trail, which was full of rocks and deep creek crossings that made lifting their feet essential to staying dry. 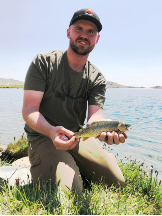 Daniel Mathis is an avid outdoorsman who spends every chance he gets in the mountains. He is currently attending Idaho State University for ecology and conservation biology, in hopes of one day working in fish and wildlife management. He enjoys hunting, fishing, camping, and hiking on public lands, and wants to spend his life conserving public lands and wildlife so future generations can enjoy them.
View all posts by Daniel Mathis →
ORDER BY MAIL