All the Way Through

Hiking the Idaho Centennial Trail in One Season

Story and Photos by Collin Ciarlo

It took three years to prepare for hiking the approximately one thousand miles of the Idaho Centennial Trail (ICT). Lauren, a great friend of mine for years, said during one of our many peak-bagging trips that we should start planning for it. That was in 2017, and I felt like doing the two-month-long hike in 2020 would give me enough time to save up and get ready for it. We both trained hard. I own a small personal training business and enjoy helping people get in shape for running and hiking, so it was fun to put together a program for myself. During the year leading up to the hike, my strength and cardio workouts were specifically for the hike, although in hindsight I should have trained my calves and feet better. I also should have gone on a few more twenty-mile hikes in the same boots I wore on the ICT. But other than that, I felt physically prepared and healthy.

The trail begins near Murphy Hot Springs on the border of Nevada and Idaho and winds north through the state to American Falls, also called Upper Priest Falls, at the Canadian border. Only a few dozen people have through-hiked it, finishing the entire trek in one season [for another account, see, “The Gnarliest Trail,” by Dan Noakes, IDAHO magazine, October 2018].

That’s why preparation is so important, including food for the hike. I made about two-thirds of my food from scratch. Packaged food often upsets my stomach and store-bought freeze-dried meals definitely bother me. The first things I made for the trip were high-calorie breakfast mini-fruitcakes with homemade dried fruit and nuts that I vacuum-sealed and froze. They have too many ingredients to list, but they came in around 650 calories per serving. On the trail I would have one for breakfast with instant coffee, and it was my favorite part of the day. My mom supplied homemade soups and chili that she freeze-dried and we then vacuum-sealed into portions of about 650 calories. Mom also made freeze-dried grilled cheese bites that tasted amazing in the soups and added valuable calories. I made freeze-dried shepherd’s pies and pasta with marinara and beef to round out my dinners. Granola, trail mix, and energy bars rounded out my intake to about two thousand calories per day. Based on my estimates of calories I burned on the trail, my daily deficit was more than three thousand calories. 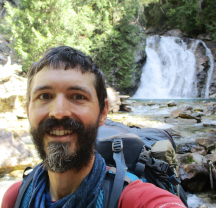 Collin Ciarlo grew up in Orofino and graduated from Boise State University with a bachelor’s degree in biology. He and his wife, Katie Ponozzo, currently live in Boise and own a personal training business in Meridian. He enjoys peak-bagging and backpacking throughout the West with his friends.
View all posts by Collin Ciarlo →
ORDER BY MAIL