A Peak for the Fergusons

In Honor of Everyman Climbers

Story and Photos by Steve Grantham

The history of Idaho mountaineering is full of illustrious names, but it also includes hundreds of other men and women who explored the state’s mountain ranges to little or no fanfare. Two such climbers I had the privilege to know were the Ferguson brothers, Chuck (1940–1998) and Dave (1939–2020), the latter of whom was one of my closest friends for almost four decades. I would like to share some memories of these quintessentially Everyman climbers.

Dave and Chuck were born in Illinois but moved to a farm in Idaho in 1948. They both had an affinity for mathematics. Chuck taught math in middle school in Idaho Falls, while Dave joined the Mathematics Department at Boise State in 1970, having earned his PhD from the University of Idaho. Farming also was central to Dave, who lived on a farm his entire life and relished both the physical work and the practical ingenuity it required. Even though he was a good mathematician and a gifted teacher, he preferred to describe himself as a farmer who happened to teach mathematics.

Dave and Chuck both began climbing Idaho mountains in the 1970s, often together. Dave had married Sharon in 1960 while still an undergraduate student, an event he always described as the luckiest day of his life. They soon had two children: Tammy, born in 1961 and Ken, who came along in 1963. He loved taking the whole family on mountain adventures that most people would never consider, with equipment that could best be described as primitive. For example, in those early days he carried one foam pad about eight feet square and four inches thick for the whole family to sleep on. On the family’s first trip up Mount Borah in 1976, for some reason he decided to camp on the ridge partway up the mountain. A couple of years later, when he took the family up the very impressive Warbonnet Peak in the Sawtooth Range, which is technically challenging and has a summit pitch that’s airy, or exposed to space, he told Ken to be the lead climber. “We didn’t know any better,” Dave often said. “We thought that’s what everyone did.” 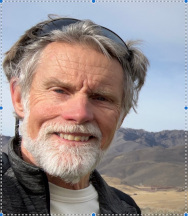 Steve Grantham spent almost thirty years at Boise State University in a variety of roles and has been hiking and peakbagging in Idaho since 1982. In 2019 he finished climbing all 123 of the Idaho peaks taller than eleven thousand feet in elevation, becoming the eighth person known to do so.
View all posts by Steve Grantham →
ORDER BY MAIL