In with the Old and New

On a clear blue day in the summer of 2018, I peered out the windows of a building in downtown Sandpoint and saw the city for the first time—metaphorically, that is. I grew up thirty minutes from Sandpoint in Hope, which is reached by a winding, cliff-lined drive along the northern shore of Lake Pend Oreille. In my childhood, Sandpoint was “town,” the land of grocery stores and movie theaters, dentist visits and ballet classes. It was a major city in the mind of a kid from a town with maybe two hundred year-round residents. When I was a child, the population of Sandpoint was around eight thousand.

I went to Hope Elementary and Clark Fork Junior-Senior High School, graduated among a class of only twenty students, and attended the University of Idaho in Moscow. When I came home to Bonner County in 2017, I turned my journalism degree into a career at an alternative weekly covering the arts and culture of the state’s panhandle, the Sandpoint Reader, where I now serve as news editor.

With me on that day in 2018 was the newspaper’s publisher, Ben Olson. Our office is in the towering Farmin Building, raised in 1909, a stone structure of vaulted ceilings and creaking wooden floors. We stood at one of the room’s gigantic windows, looking down on construction in the streets as part of the city’s downtown revitalization project, which brought widened sidewalks, extended curbs, and a heightened sense of tourist-friendly pedestrian safety to the shopping district. From our perch, Ben and I could see many of the components that define the county seat: bustling streets peppered with businesses old and new; green mountains, including the beloved (and still partially secret) ski resort on Schweitzer Mountain; and just a slice of Lake Pend Oreille—northern Idaho’s beating blue heart. 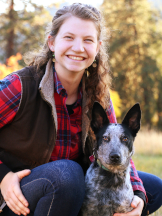 Lyndsie Kiebert-Carey is news editor of The Sandpoint Reader, an alternative weekly that covers northern Idaho. She has a degree in English and journalism from the University of Idaho. When she isn’t writing, Lyndsie coaches volleyball and works as an elementary school teacher’s aide. She lives in Hope with her husband and their beloved pets.
View all posts by Lyndsie Kiebert-Carey →
ORDER BY MAIL