A Town To Be Proud Of

Mountain Home was in its infancy when this photograph was taken about 1885. The freight wagon in the foreground, hitched to an eight-mule team, looks a lot like one of the covered wagons that carried pioneers over the Oregon Trail.

Wagons like these passed north of present Mountain Home on the great Overland Road bringing pioneers into the Pacific Northwest. After the Union Pacific railroad was finished in May 1869, freight from Kelton, Utah, was hauled along the old route, known thereafter as the Kelton Road. It connected the Union Pacific with mining towns in Boise Basin like Idaho City, Placerville, and Boise City—capital of Idaho Territory. Rattlesnake Station on that road, where Rattlesnake Creek comes out of the mountains, was renamed Mountain Home, no doubt because it was a prettier name, but also because it was near Bennett Mountain.

Wagons such as this one carried freight from Kelton, Utah, to Mountain Home via the Kelton Road. Photo courtesy of the Idaho State Historical Society. 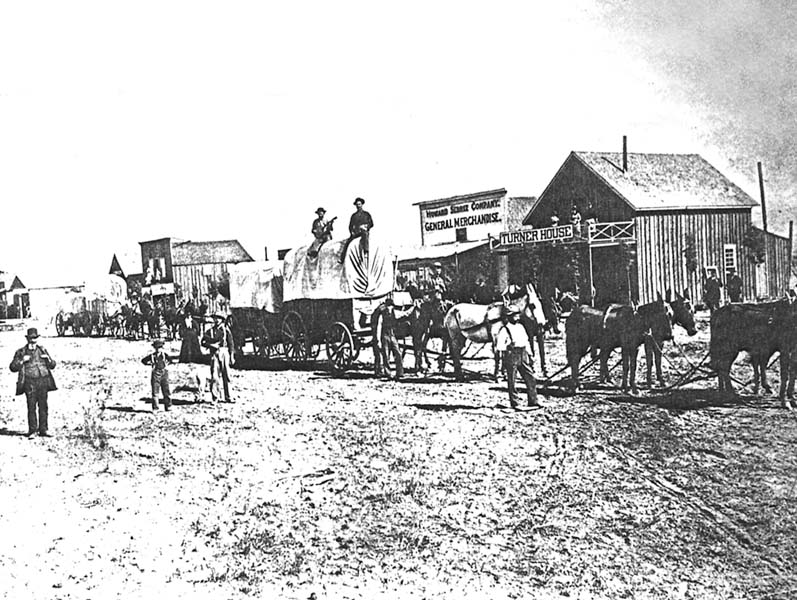 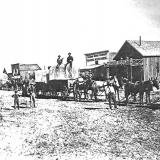 When the Oregon Short Line railroad was built across Idaho in 1883, the town was relocated to a site beside the tracks. Freight wagons, like the one shown in our historic snapshot, continued to haul supplies from the railroad to the mountain mining camps of Atlanta and Rocky Bar, then the county seat, and to other points to the south, like Bruneau and Oreana in Owyhee County.

Mountain Home’s permanence was assured by its location as a shipping and transfer point for towns both north and south. Cattle and sheep were loaded at Mountain Home for eastern markets, and stagecoach lines carried passengers and mail on regular runs from the railroad to those places.

If any one person deserves the name “father of Mountain Home” it is William J. Turner who bought the first five lots from the railroad’s townsite company and erected the first building. Turner House, the town’s first hotel, shows prominently in our picture, next to the general store of Howard Sebree, another pioneer who seized the opportunities presented by new towns along the railroad, especially at transportation hubs like young Mountain Home and Caldwell. All of the western railroads were given large land grants by the government as an incentive to build. They platted the towns and sold the lots to pioneers like Turner.

William J. Turner would greatly enlarge the little hotel shown here, and later build another hotel that was the biggest building in town. Since he got there first, two years before the railroad had reached that point, and had the foresight to invest in real estate in what became the town’s commercial center, Turner became a wealthy and prominent citizen. In 1896 he was appointed postmaster by President William McKinley, like himself a Republican and a native of Ohio.

We have often wondered what tune the banjo player atop the covered wagon might have been playing when our historic photo was taken. Was it “Oh, Susannah” or “Dixie?” Looking at this evocative picture, we fancy we can hear those tunes ringing in our inner ear. Since the people in the photo are unidentified, I also wonder if the gent at the far bottom left in a business suit might be Mr. Turner himself. The way he is grasping his lapels suggests a proprietary air, as if to say “This is my town, and I’m proud of it.” [/private]

Arthur Hart is director emeritus of the Idaho State Historical Society.
View all posts by Arthur Hart →
ORDER BY MAIL