Alone in His World

Posted on by Teddy Khteian-Keeton

An Encounter with James Castle, Master of Found Materials Art

In January 1963, before the first Idaho exhibition of work by James Castle, I was publicity chairman of the Boise Gallery of Art (now the Boise Art Museum), a member of its board of directors, and the art columnist for the Idaho Statesman.  During the months preceding the Castle show, the chairman of exhibits, Dale Walden, had alerted me to Castle’s sensational “outsider” work— the term applied to people who do not follow academically accepted practices of art or use traditional materials.

“A man from Garden Valley who was born deaf and has mastered the production of art from found materials,” Dale replied.

He explained that Castle assembled bits of paper and cardboard with spit and soot from a wood stove to create his impressions of the world around him. I agreed to write a story for the paper, even though I had doubts—a prejudgment—as to its quality and execution.

When the bulk of material for the show arrived, I was summoned to the gallery, where Dale was unpacking art pieces and talking with a lady he introduced as Castle’s sister, Peggie Wade, who “took care” of the artist. Dale explained that I would write a review of the exhibit, and she said, “He’s busy working on a piece and wouldn’t come, but I’ll try to fill you in on his art production.”

Peggie went on, “He was born in Garden Valley in 1899, the fifth of seven children, and has never been able to hear or speak. He was cared for by his mother until her death in 1948. Now he lives with us.”

I asked when he began to draw and where he went to school, and she replied, “Our parents didn’t send him to school until he was twelve, and then he went to the Gooding School for the Deaf and Blind.”

The school didn’t suit the handicapped youngster as an institution of learning, but it did provide a subject for many pieces of his art. Peggie said her brother taught himself to draw, beginning at an early age in Garden Valley, where their parents ran the post office. “He was always picking stuff up, looking it over and, if it was something he could work with, carrying it back to his room.” 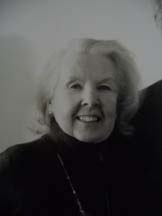