Back to Shorty Peak

Posted on by Cecil Hicks

Overnight at the Fire Lookout

Story and Photos by Cecil Hicks

Through trees on a steep trail in the Selkirk Mountains of northern Idaho, I looked upward and finally saw our destination, at an elevation of six thousand feet.

My grandsons Erik, thirteen, and Ian, eleven, sprinted ahead of me, vying to be first to the Tower, which is about forty-five miles northwest of Bonners Ferry in the Kaniksu National Forest of the Idaho Panhandle National Forests system. My eldest son Brian, the boys’ father, waited calmly about ten yards to my rear as I shifted my forty-five-pound pack and stepped out again. A few minutes later, we hiked over rocky outcroppings that are a predominant feature of the terrain just above the timberline approaching the mountain’s peak.[/private]

This was September of last year, and we’d been hiking for about two hours since parking our car off a logging road at the trailhead some three miles back. Brian works for the U.S. Forest Service in Sandpoint as an assistant fire management officer and the summer had been extremely busy, with lots of fires. As the season moved toward autumn, things finally slowed down and he wanted to take his sons on an overnight camping trip. When he asked if I wanted to go along, I suggested we rent a lookout for a night and hike in. He agreed, and I told him about the time roughly thirty years earlier when I hiked into Shorty Peak Lookout. I was a seasonal worker on a Forest Service fire crew in the Bonners Ferry Ranger District, which is the northernmost of Idaho’s districts, meeting Canada at its border. I told Brian it was an easy three-mile hike to Shorty Peak, on a trail that I recalled went mostly along a tree-lined ridgetop.

Easy. Yeah, right. The trail is actually fairly steep, climbing about thirteen hundred feet in elevation from the trailhead where we parked our car. Three decades ago it might have been easy, when I had younger legs and was in good shape after working a season with the fire crew. But now I’m a seventy-one-year-old retired fourth-grade schoolteacher who exercises by taking short hikes, riding a stationary bike a few times a week in our living room while I read or watch TV, and walking while playing nine holes of golf two to three times per week during the summer. 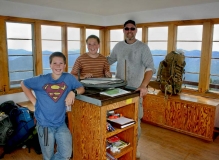 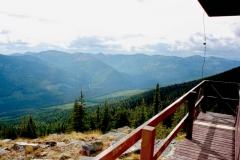 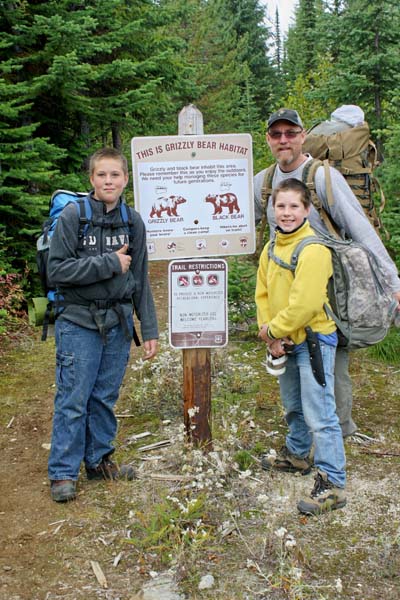 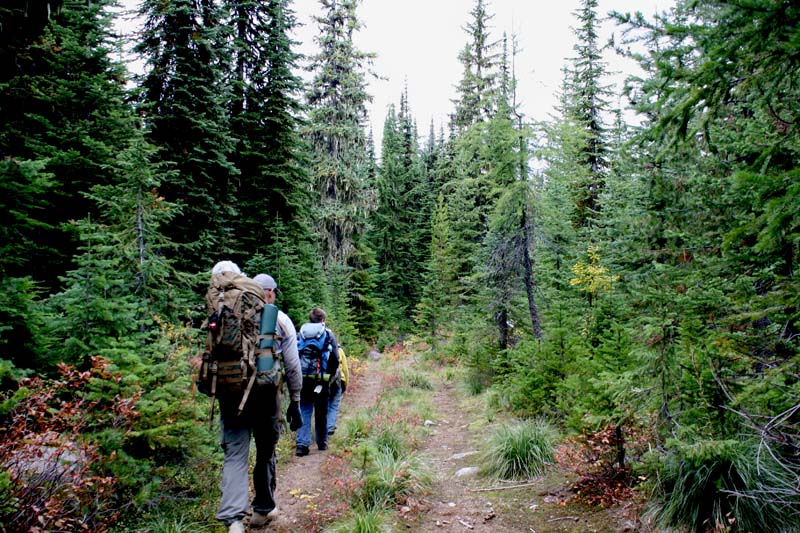 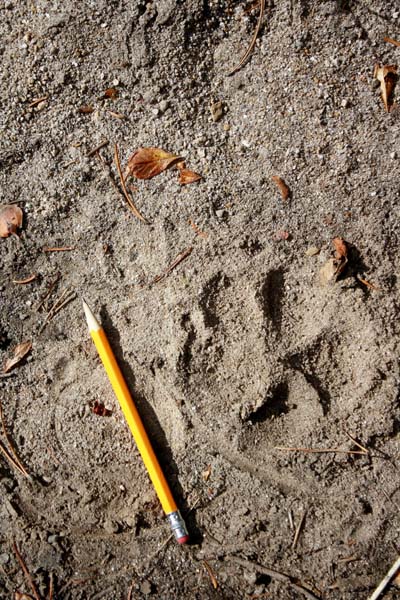 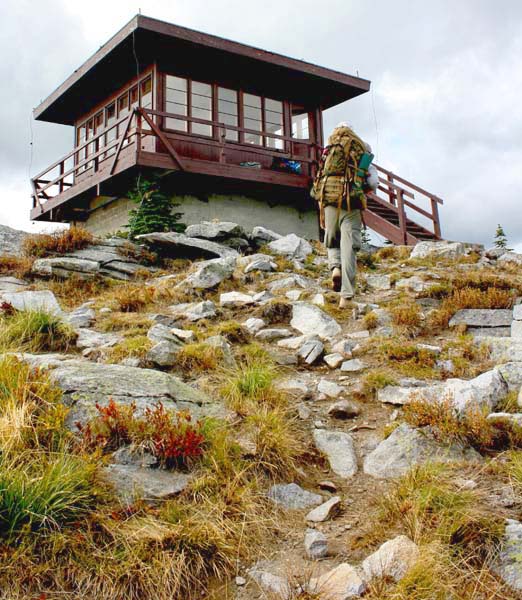 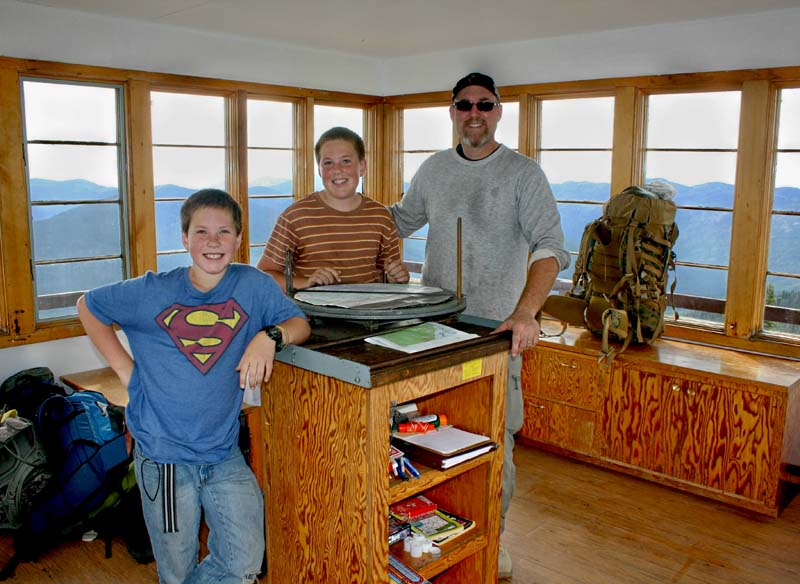 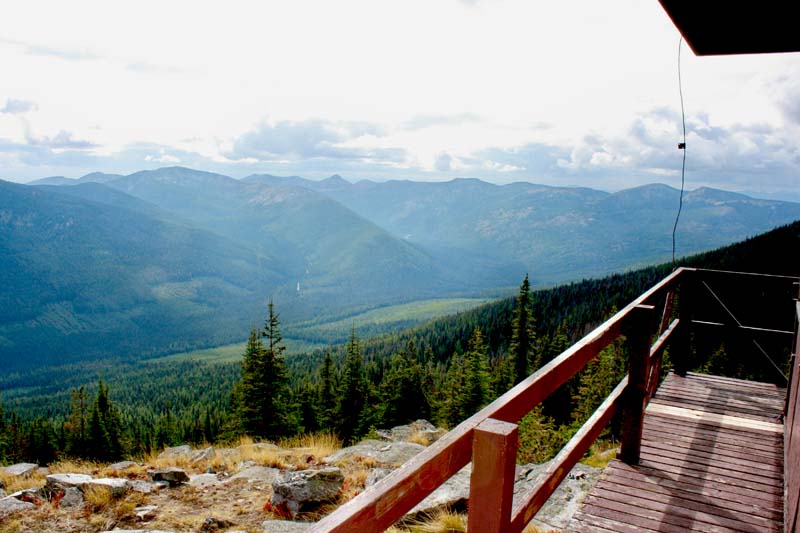 I remember back in the day, when I drove with a fellow fire crew member to the trailhead in the Selkirk Mountains within sight of the Canadian border and we hiked in, it was also September. Our assignment was to close and lock up the lookout for the winter months. At that time, a volunteer forest fire lookout had been on site for the past month. She helped us install shutters on the windows that surrounded all sides of the tower, lock the door, and set a few empty propane tanks (used for heating on the cooking stove) in a cargo net near the top of the peak, so a helicopter could fly in the next day to haul away the net and its cargo. After we finished closing up the lookout, we hiked out, and gave the lookout a ride back to town.

I remember hiking the trail in just over an hour without even stopping and taking a break, and I don’t recall even working up a sweat. But this time the hike took twice that long, interspersed with a few short breaks. The day was clear and the temperature was in the mid-fifties at that mountain altitude, but my shirt was sweat-soaked.

When Brian and I were still a couple hundred yards from the lookout, Erik returned back down the trail. He had ditched his backpack on the hand-railed walkway that encircled the lookout tower and he now volunteered to carry my backpack. At first I refused, but he was determined to assist and help out his “Papa” (as my grandkids call me), so I gave in and handed him the backpack. I have to admit, it made hiking the final distance up the steep rocky knoll a little easier.

We hadn’t seen any wildlife on our drive to trailhead from our homes near Sandpoint. The only animals we saw were a small herd of cattle that blocked the forest service road for a time. Driving slowly among the cows, which had gathered near a cattle crossing guard about three miles from our destination, we figured they were part of a grazing allotment leased from the government and had spent most of the summer in the mountains. No doubt the approaching cooler weather meant it wouldn’t be long before the cattle would be rounded up, loaded into trucks, and hauled back down to a ranch in the Kootenai River Valley for the colder months.

We didn’t see any wildlife on the hike in, either, but we did spot wolf tracks. This part of Idaho harbors wolves, grizzly and black bears, deer, elk, moose, cougars .and a few woodland caribou.

Before renting the Shorty Peak tower for a night, I learned on the Internet that about eight thousand such fire lookouts once were staffed nationwide, but their use declined during the 1960s and 1970s as airplane patrol flights took over. According to a website of the Forest Fire Lookout Association, ten towers in Idaho are available for overnight rentals nowadays. They’re maintained and managed by the U.S. Forest Service, and rental arrangements are made through individual district offices. Costs vary, but our overnight Shorty Peak stay cost just thirty dollars. After making the payment, we were given an entry combination code for the tower’s door lock.

These remote mountain lookout sites have no electricity, plumbing, or flush toilets. Outhouses are the norm. We packed in enough food and water for our stay, plus a change of clothing that included jackets for the cool temperatures of night and early morning at high elevations.

Availability of the lookout rentals is seasonal. Last year, Shorty Peak was open from June 27 to September 27. The tower, whose interior is about fifteen-by-fifteen feet, held two wooden single bunks with mattresses on opposite sides of the room. Underneath each bed were storage drawers. Exercising parent and grandparent privileges, Brian and I claimed the bunks. But when night fell, there was still plenty of room for the youngsters to spread out a sleeping bags and pads on the floor.

Along the wall between the beds was a spacious dresser and just inside the entrance doorway, a table’s drawers held cleaning supplies. Two wooden chairs had glass insulator caps on the bottom of their legs, so if a storm passed through the area, a lookout or guest could sit on a chair and not be electrocuted, should lightning strike the tower.

A broom with dust pan and bucket leaned in one corner, and in the center, a storage console held a forest service map of the area with a circular, rotating fire finder. On a shelf beneath the console we found a registration book for comments. A second shelf held a first aid kit, a few candles, a book of matches, a couple spare propane tanks for a small camp stove, and family games.

The spectacular 360-degree view from inside the lookout or while standing on the walkway surrounding the tower revealed mountains in all directions.

Among the comments I read in the registration book were these:

8/6/15 to 8/8/15 —“What a lovely cabin lookout. It was clean when we arrived. The beds were comfortable. The view was awesome. The hike to the bathroom (outhouse) was a little long (maybe a hundred yards) down the hill from the lookout. We enjoyed our stay, hiking, playing games and talking. Smoke from regional fires was bad at times. Thank you.”

8/10/15— “The spring is dry so we had to cut our stay short as we don’t have enough water to stay another day.” (This comment concerned a spring that is located about a half-mile from Shorty Peak. Because of the hot weather last summer, the spring dried up around mid-August.)

8/12/15— “Another year at Shorty Peak Lookout. We arrived mid-afternoon. It’s always peaceful and just the type of getaway that was needed. We will be back. The one drawback was lots of smoke from forest fires hanging around.”

Smoke from the seven-thousand-acre Parker Peak Fire, two ridges south of Shorty Peak, hung in the air for weeks, although by our mid-September visit it was gone. We drove past a finger of this burn along the West Side Road, on the route we took to the trailhead.

About an hour after our arrival at the lookout, the temperature began dropping when dark clouds moved in and the wind picked up. After exploring the surroundings and checking out the view, we ate a dehydrated meal heated on a single propane burner stove Brian had packed in. Entertainment for the evening before it got dark included talking and playing a card game. By 9 p.m. everyone was in their sleeping bags. It rained most of the night.

We were up by 6 a.m., had breakfast, and were packed by 8 a.m. I wore layered clothes and a jacket with a stocking cap and gloves, as the temperature was about thirty-six degrees when we started down the trail. When we locked up and stepped outdoors into a light rain, it was like entering a cold cloud or fog bank. But that was part of the thrill. We had a great stay, and I was glad to have made a return visit to Shorty Peak Lookout.

Each of the following ten fire lookouts is available for summer rental. For more information about them, visit the Forest Fire Lookout Association at firelookout.org/lookout-rentals. From there, each site is hyperlinked to its own informational page provided by Recreation.gov.

Castle Butte—Sweeping views of the Selway-Bitterroot Wilderness and Seven Devils Mountains from this site in the Nez Perce-Clearwater National Forests.

Deadwood—At 8,200 feet atop Deadwood Mountain in the Boise National Forest.

Deer Ridge—In the Idaho Panhandle National Forests, the views are of mountain ranges in northern Idaho, Montana, and Canada.

Little Guard—Views of the North Fork of the Coeur d’Alene River and the Bitterroot Mountains from this lookout in the Idaho Panhandle National Forests.

Lookout Butte—See the Selway Crags, Seven Devils, and the Lochsa and Selway River drainages from this tower in the Nez Perce-Clearwater National Forests.

Cecil Hicks lives in Sandpoint with wife Maureen. They have five children and ten grandchildren. Cecil has worked as a firefighter, smokejumper, reporter for weekly newspapers, and as a fourth-grade elementary school teacher. A regular freelance contributor to American Bee Journal, he interviews beekeepers and writes their stories.
View all posts by Cecil Hicks →