Posted on by Corry Hatch

Where Trains Provide the Soundtrack of Life

Story and Photos by Corry Hatch

It seems like yesterday. Hell, it was yesterday. I crawled my way up the riverbank, through the grass, and onto the bridge abutment. My eyes turned south to the sound of the train. With its diesel engines revved up, it pressed up the grade toward Bancroft, like trains do fifty times a day. This was an exact copy of an event that had happened many times in my life. It may as well have been 1985. The river, the road, the railroad track, and trains all run at the same pace they have since my youth.

In my first memory of the area, the early summer sun drove through my window in a pillar. It cut the chilly air with its warmth. I snuggled down in the covers of a wool blanket and homemade quilt. Three miles away, a train made the corner north of Whisky Mike’s, headed east for Bancroft. I could hear its engines whine and its horn blow warning of the Kelly Toponce Crossing. The sound was so clear I fantasized I could tell how many cars were being pulled just by the noisy struggle of the engines. I lived out on the Kelly Toponce Road west of Bancroft and southwest of Chesterfield. It was home to me, perhaps the last home I’ve known. It is country living at its finest, and Bancroft was, and is, its center.

Take old Highway 30 north from Lava Hot Springs, following the Portneuf River and the railroad track around the mountains, and you’ll run right into Bancroft. The town was settled around 1882 with the arrival of the railroad, which brought with it a need for timber and labor. A fella from Chesterfield named Parley Willey was contracted to supply the lumber for the rail ties and he built a sawmill at Squaw Creek. This venture brought work to the area, and with it, people. Industry tied to the necessities of the railroad and the residents sprang up, and a bustling settlement was quickly established. This settlement became the town of Bancroft, named after W.H. Bancroft, president of the Oregon Short Line Railroad Company in 1892.

An old train stop on the railroad: that’s how Bancroft was born. The trains don’t stop anymore, but they do blast through many times a day and night. The sound of the train is the soundtrack of life in Bancroft. Most residents don’t notice it, but it is relentless and noticed by the visitor. 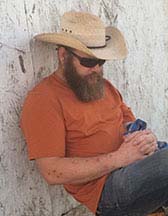 Corry Hatch is a farmer, rancher, trapper, and thinker, who is a historian by education, a fly fisherman by passion, and a fur dealer by trade. He lives in Bancroft, where he dreams of large trout, prime fur, and a good book.
View all posts by Corry Hatch →