Posted on February 1, 2016 by Richard Bennett

And the Man Who Provided Its Name

A prominent mountain northeast of Mountain Home, seen on the left as you pass through the outskirts of town on I-84 eastbound, bears the name Bennett Mountain. Scores of my cousins and second cousins and their children recount with pride that the mountain was named for Richard Bennett, our ancestor.

I grew up in Mountain Home and don’t remember any of the locals or family members ever questioning the origin of the mountain’s name. It was named after my great-grandfather who ran sheep there a hundred and thirty-five years ago . . . or was it?

In June of 1995, Dick Fores, my second cousin, a retired forest ranger who lives in California, called to tell me he would be passing through on his way to Alaska on a bucket list trip. He wanted to drop off some boxes his mother left him when she died. His mother Edith, born in 1900, was Richard Bennett’s youngest child. Dick’s visit was brief. His pickup was pulling a fifth-wheel camper trailer, and he was anxious to get back on the road with his dog for their long trip along the Alcan Highway.

Not long after he drove away, my wife Marsha and I opened the three heavy cardboard boxes he’d left with us. They were packed with journals, letters, legal documents, accounts of Richard’s immigration story, old photo albums, items of clothing that belonged to Richard’s wife, Flora Annie, and a massive old leather-bound family Bible, one of those really interesting relics from a bygone era, with a nickel clasp. Inside, Flora Annie had recorded the date Richard had given it to her—their wedding day, October 14, 1878—along with dates spanning more than fifty years of family births, marriages, and deaths. It is now a cherished family heirloom. I have always had an interest in family history and promised myself that soon I would dig through all the paper and pictures and compile a narrative to share with my immediate family. It took me until I retired, fourteen years later, to get started. 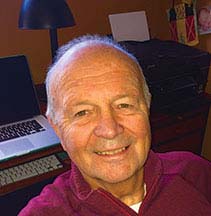 Richard Bennett is a fourth-generation Idahoan who grew up and spent his early career on a sheep and cattle ranch. In 2010, he retired as an insurance company executive. Married with two grown daughters and four grandchildren, Richard became interested in writing after compiling a family history. His historical novel, Rock Creek, set in Idaho in the late-19th Century, is out in the spring of 2016 on amazon.com.
View all posts by Richard Bennett →
ORDER BY MAIL