Posted on by Ashlee Sierra

We all dream about changing the world. For me, those dreams started early, at an age when the only actual change I could bring about was eating a different cereal for breakfast or watching a different cartoon on Saturday morning—but despite that powerlessness, I dreamed big.

A few years passed, each less world-changing than the last, until, infinitely wiser at the age of six, I thought I’d finally found the answer. It was one of those public service announcements showing the effects of animal cruelty—you know, the commercials that combine tearjerker songs and heartbreaking footage of sad-eyed animals, the ones that make you want to grab the closest pet and hug it. Yeah. Not three seconds later I was flopped down on my bedroom floor, wiping my eyes and counting out my hard-won pennies. I finally knew how I was going to change the world. But then, an epiphany—in the form of another commercial, no less, although this one starred hungry kids instead of sad puppies. I was torn. Who needed my pennies more? For the first time, I realized why changing the world is so difficult: there’s a lot of change to be made, and one person—let alone one tiny, pigtailed girl—just can’t do it all. 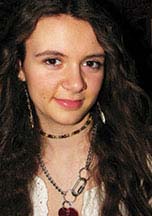 Ashlee Sierra is a sixteen-year-old stargazer, dragon-rider, and habitual haunter of antique bookstores. She has written three short screenplays, two award-winning poems, magazine articles, a piece for the stage, and much more. She is currently working as a content writer for a nationwide marketing company. Ashlee can be contacted regarding literary endeavors at [email protected]
View all posts by Ashlee Sierra →