Posted on by Arthur Hart

In June, 1915, when our historical snapshot was taken, the speed limit was twenty miles per hour and gasoline was twenty cents a gallon. In August, automobiles were admitted to Yellowstone National Park for the first time. An Idaho Statesman headline read: “Admission of Motor Cars a Success. No Accidents or Trouble Result from Their Entrance to Yellowstone.” Many of the Idahoans who toured the park that summer were driving Model T Fords like the ones shown here.

Henry Ford began producing his famous Model T in 1909, but it was the 1914 model that revolutionized the automobile industry. It was the first car mass-produced on an assembly line by workers paid the unheard-of sum of five dollars a day, plus a share of the profits, for an eight-hour work day. Thousands clamored to get jobs at Ford. The assembly line was a new concept, now used universally in all kinds of manufacturing. Model T Fords could be put together eight times faster than the hand-built earlier models where each mechanic performed many tasks instead of just one. 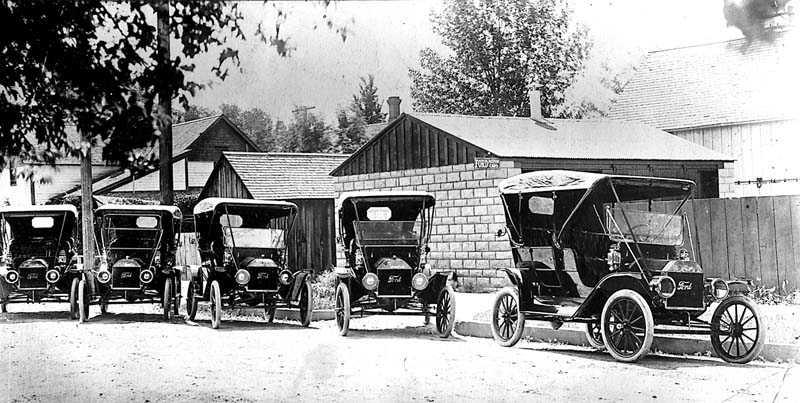 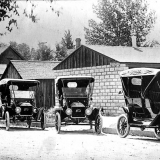 The shiny new 1914 Model Ts in our photograph were assembled not in Detroit, but in Boise. H.H. Bryant, who had owned the Ford dealership in Boise for several years, was married to Henry Ford’s sister. In 1914 Bryant started a small assembly line, putting together cars from parts shipped to Idaho on the railroad. We surmise that this historic snapshot was taken to commemorate the first batch of Model Ts built in Boise.

True to Henry Ford’s dictum that customers could have “any color as long as it’s black,” these five beauties are black, but highlighted and ornamented with a gleaming brass radiator with the Ford logo in the center and four shiny brass headlamps. The diagonal braces supporting the windshield are another hallmark of the famous 1914, one of the all-time classics in automobile history. The Model T would revolutionize the American lifestyle, putting ownership of an automobile within the reach of the average family.