Posted on by Wendy Green

Story and Photos by Wendy Green

As I turned off Indian Valley Road into my driveway, I expected to be greeted by a host of blooming camas among the native bulbous bluegrass and Idaho fescue.  But as I scanned the damp places where these western wildflowers grow, I saw their slender stalks pregnant with the promise of blue but not quite ready to give birth.

Don’t ask me why I thought camas would be blooming that particular day.  It just felt like camas time.  As I drove slowly past the valley pastures and drank in the smell of a late-afternoon rain shower, my thoughts turned to wildflowers and phenology.  It was late April, after all.  I couldn’t remember when the camas began blooming last year, but it just felt like they should be coloring the hillsides this evening with their soft azure shades.

I paged through my journals, where I keep track of all manner of natural phenomena.  My notebooks are filled with jottings about the first tundra swans to arrive at Ben Ross Reservoir during spring migration and the last mule deer sightings after winter snows have hushed the valley.  I can tell you when the American goldfinches finished molting into their bumblebee black-and-yellow breeding plumage and when the narrow-leaf cottonwoods along the shore began sporting a fresh green cloak.

April 28, 2004:  46 degrees at noon, winds northwest at eight to twelve miles an hour.  It’s cloudy; the dark-bottomed cumulus promise another shower before nightfall.

The bitterbrush is blooming on Midvale Hill, the air redolent with its sticky perfume.  Perhaps it is a difference in the soil or the aspect of that slope that allows the bushes to bloom there before the tiny yellow blossoms begin to appear on the bitterbrush near my house.  I saw the first trillium poking up through the pine duff in the woods on Sunday evening, along with a few delicate yellow woods violets.  My brother, the consummate woodsman, will remind me that once the trillium have appeared, it won’t be long until we hunt the elusive morel mushrooms. Of course, we are over-eager to gather these gastronomical treats and will make a couple of fruitless forays, as we do every spring, just absorbing the feel of new life in the woods, before we find that first crenulated morsel in the shade of a white-fir grove. 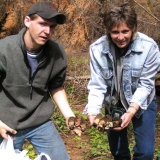 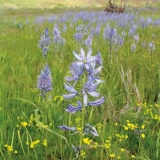 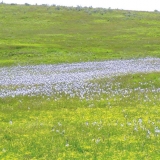 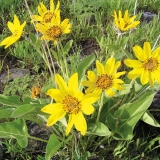 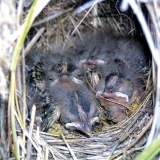 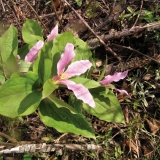 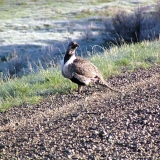 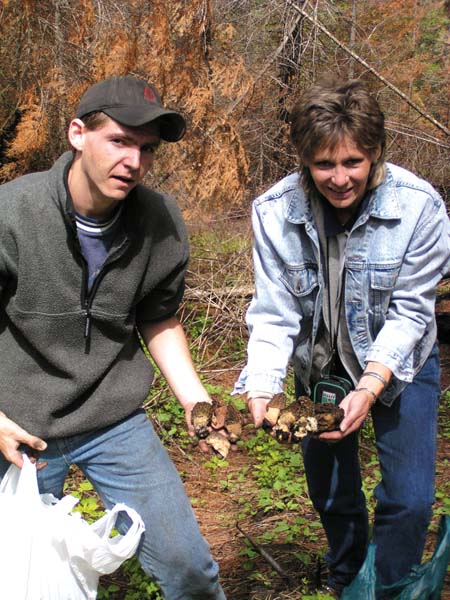 An Indian Valley camas field during the spring of 2004. 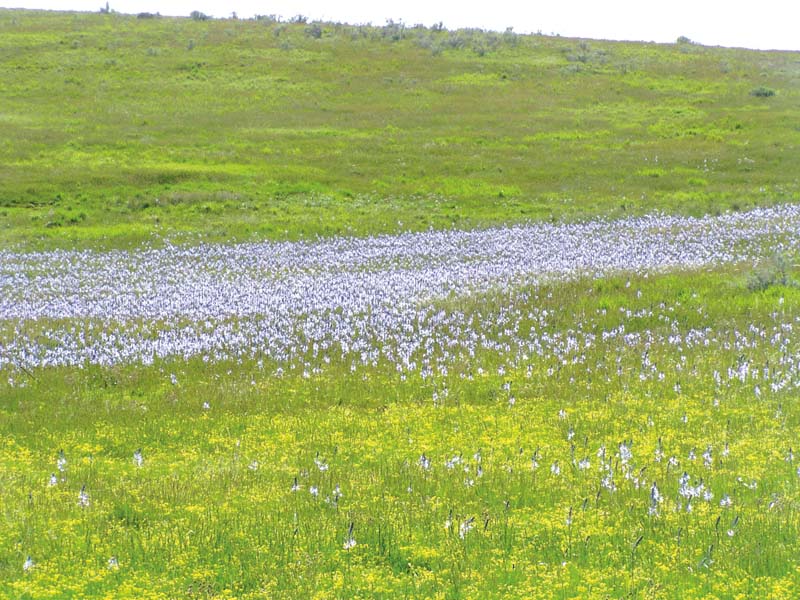 Arrowleaf balsamroot on a hillside above the Little Weiser River. 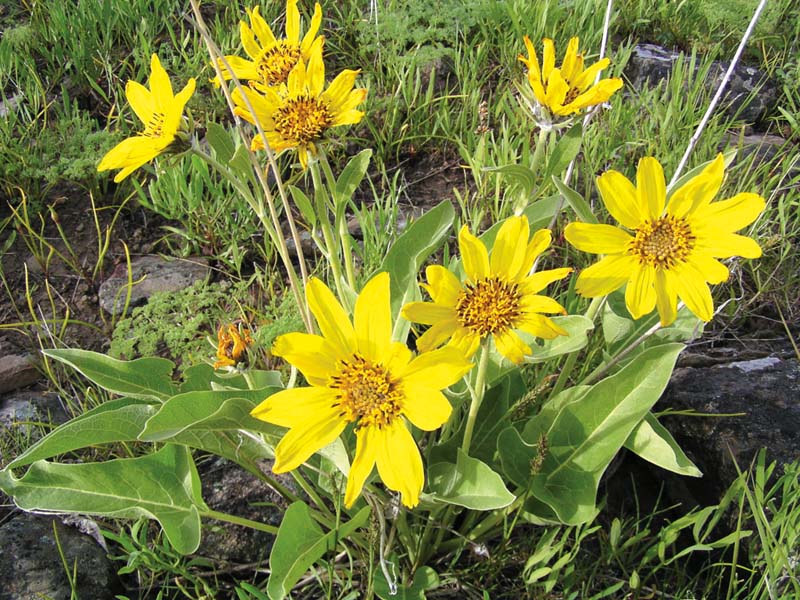 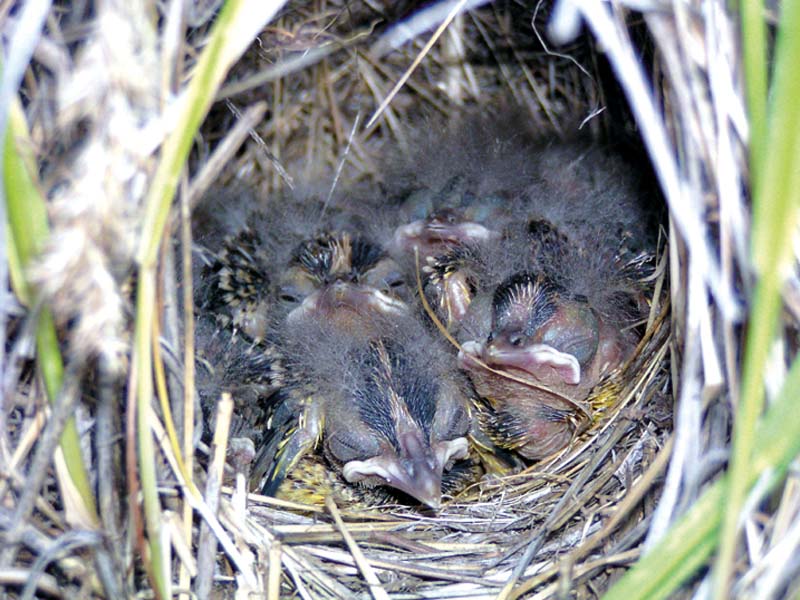 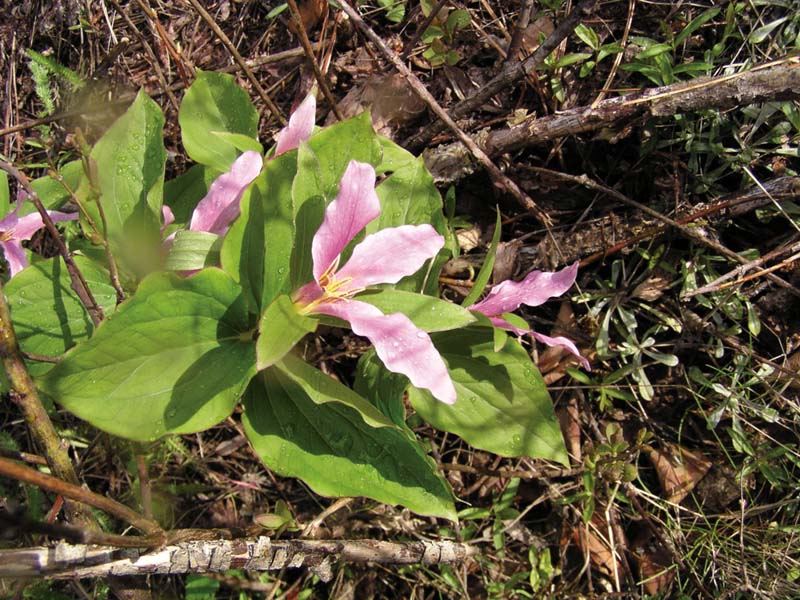 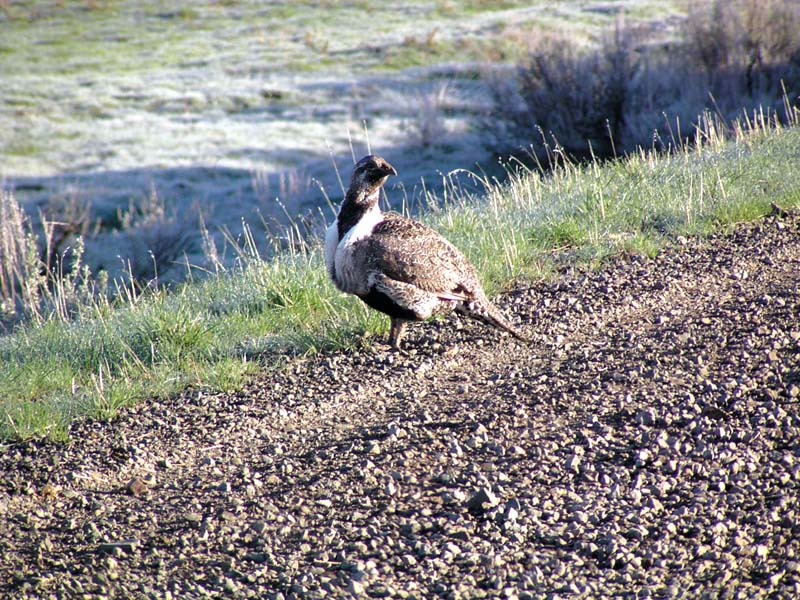 It seems I didn’t record the opening of camas flowers last year.  That started me thinking about phenology. No, it’s not some New Age fad. Quite the contrary.  Phenology has been practiced for ages.  You probably do it yourself, year-in and year-out.  You just never bothered to hang a name on the activity of watching for telltale signs of changing seasons.  That’s all phenology is: the study of biological phenomena, such as flowering, breeding and migration, in relation to climatic conditions.  In other words, it’s how you know when it’s spring.

Lewis and Clark would have been fabulous phenologists, had they stayed in one place long enough to witness the changing seasons.  I marvel at the meticulous notes that fill their journals about the weather, plants, and animals they encountered on their journey up the Missouri River to the Pacific Ocean and home again.  From his observations of a single spring morning along the Missouri in 1804, Meriwether Lewis wrote well over a thousand words describing the characteristics and behavior of the wildlife he saw: buffalo, geese, grizzly bears, pronghorn antelope, and coyotes, which Lewis referred to as “prairie wolves.”  In fact, the captains were the first Europeans to describe a host of species of the Great Plains, Rocky Mountains, and Pacific Northwest, including the mountain alder and western red cedar, mountain huckleberry, Steller’s jay, blue grouse, spruce grouse, and ruffed grouse, and the greenish-black woodpecker with red face that we know today as Lewis’s woodpecker.  My journals do not reveal the feeling of kinship with my fellow phenologist that rouses me each time I spy his namesake flitting through the ponderosa pine forest near my home.

Tuesday, June 6th:  Spotted a black-headed grosbeak in the narrow-leaf cottonwoods along the shore of the reservoir this morning.  Found him through the spotting scope after hearing his unmistakable song.  On my hike this evening, saw one black bear way at the top of King Hill Creek.  He was small, probably a yearling, and he seemed to be cavorting like a kid on spring recess, tumbling and cartwheeling through a clearing at the edge of the trees.  I just avoided stepping on a rattlesnake that lay curled at the edge of the path.  What was he doing up in the cool timber where we didn’t expect him?  The dogs must have smelled him, because they gave him a wide berth before I heard his warning rattle.  We were a little more watchful from that point on.  Oh, and I saw a Lewis’s woodpecker on King Hill and another along the Little Weiser River.

Lewis’s scientific observations sometimes gave way to poetic rhapsody, as when he first laid eyes on the Weippe Prairie of northern Idaho awash with camas blossoms in June 1806 as the expedition paused on its homeward trek, waiting for the snows to leave the mountain passes:  he wrote, using his phoneticized spelling of the Nez Perce word for camas, “and from the colour of its bloom at a short distance it resembles lakes of fine clear water, so complete is this deseption that on first sight I could have swoarn it was water.”

The Corps of Discovery’s first impression of camas was not so favorable.  As the party staggered out of the Bitterroot Mountains in late September 1805, the men were famished and exhausted.  They had survived an eleven-day forced march over a little used trail, “Excessively bad & Thickly Strowed with falling timber . . . Steep & Stoney,” Clark called it.  Early snows had pushed the game out of the high country and the men found almost nothing to eat.  “We wer compelled to kill a Colt  . . . to eat and named the South fork Colt killed Creek,” he noted.  When they finally reached the broad plains, the Nez Perce whom they met there saved their lives, sharing stores of dried salmon and boiled camas roots.  The starving explorers ate their fill, but the abrupt change in diet made the Corps members violently ill with diarrhea and vomiting for nearly a week.  On their return trip the following spring, the men were able to eat the camas roots without such dire consequences, but they never found the Nez Perce staple very appealing.  “This root is pallateable,” Lewis allowed, “but it disagrees with me in every shape I have ever used it.”

Once the camas–among our early bloomers–have painted the moist places with their cerulean brush and the canvas has begun to fade, is spring then in full blush?  Or is there some other benchmark that we ought to look for?  Shall we go by buttercups, another harbinger of winter’s retreat?  That would mean that spring sneaked in here even before the vernal equinox.  I discovered buttercups on my place March 11–about a week after folks reported seeing them in the lower meadows of Council Valley.

As for the vernal equinox, the day of  “equal nights” really doesn’t tell us a thing about our local seasons.  The equinox is simply the hour at which the sun crosses the celestial equator, that imaginary line across the heavens that corresponds to our terrestrial equator.  At that point, in theory, every place on earth experiences exactly twelve hours of daylight and twelve hours of darkness.  According to astronomers, the spring of 2004 officially arrived here in west-central Idaho at 6 p.m. on March 20.  Did you notice?  Neither did the plants and critters.

Speaking of critters, maybe we ought to trust them to let us know that it’s spring.  When the deer and elk return from their winter range to take advantage of green-up in the foothills of Indian Valley, then is it spring?  How about when the first meadowlark appears on a fence post, belting out his optimistic melody?  Or when the steelhead season gives way to spring chinook on the Salmon River?

As I step out the bedroom door onto the deck to count birds on the reservoir, I’m greeted by the crowing of an unseen rooster pheasant advertising himself to prospective mates.  California quail call from the neighbor’s hay field.  I count 212 western grebes on the reservoir, a new record.  Sixty-two ruddy ducks cluster near the middle of the lake, and a male bufflehead trails behind a pair of his kin.  Must be discouraging to be a third wheel this time of year.  The eared grebes have not yet selected mates; seven males and six females conduct their comical courting routine in the shallow water near my shoreline.  One pair swim so close together that their wings touch and they float along as one, alternately dipping their heads in quick preening moves.  They lower their heads in unison and chase away an interloper, even rising on their butts and paddling rapidly after him until he gets the message that he’s unwanted.  Meanwhile another pair interrupt their preening to rise up, chest-to-chest, briefly pressing white breasts together in an eared grebe pas de deux.

Perhaps you prefer subtler seasonal messengers, like morel mushrooms tentatively poking up from their winter beds among fallen fir needles.  Those delectable fungi, though, depend more on fire ecology and the amount of moisture they receive than on the passage of time that we note on the calendar.  Morel season may come early or late, depending on how much snow we had, whether the spring rains came, and even the elevation at which we hunt for the shy mycological treasure.

The snipe are back, flying around the valley making that unique whistling sound with their wings.  The slope on the far side of the reservoir is a virtual carpet of bold yellow mule’s ears, and the locust trees are finally beginning to bud.  Brother Dave and I drove to the site of last summer’s wildfire on East Fork in search of mushrooms.  In forty-five minutes, I picked about a third of a bag–the red mesh bag that once held ten pounds of oranges–on the steep slope above the gushing tributary.  Fresh bear tracks let me know that we weren’t the only pickers among the blackened tree trunks.  Dave had hiked farther up the ridge where the fire burned hotter.  No ’shrooms up there, just ash and mud.  He spooked a ruffed grouse that alighted on a branch right above my head, and I wondered if Lewis and Clark sent one of the forest bird’s ancestors to President Jefferson two hundred years ago.

Spring might not send us such a distinctive calling card as mating birds or bursting buds or mushrooms suddenly pushing up through the woodland soil.  My neighbor and Indian Valley native, Scotti Yantis, may have hit it on the nose.  “It’s a smell and a feel,” she explained, which made me feel less foolish about my hunch that it was camas time.  “And the birds’ songs sound different, as if to say we can put our winter boots away.”