Posted on by Ciara R. Huntington

There are few things more terrifying on this Earth than standing at the door to your girlfriend’s father’s house and mustering up the strength to knock. Especially when it’s 5 a.m. on a Saturday.

The door opened immediately, and a man wearing a plaid flannel shirt and holding a .12-gauge shotgun stepped out onto the porch.

He slung his shotgun and shook my hand firmly.  “Nice to meet you, son. Where’s Callie this morning?” he asked. His voice was gruff and wallowing in his own authority over me, the lowly suitor of his only daughter. He had a tanned, wrinkled face with blue eyes like Callie’s.

There was an ornery glint to them.

“Caught some virus on Friday, spent all night coughing, with a fever,” I replied, not quite managing to make a coherent sentence. It’s five in the morning, and I’m talking to my girlfriend’s dad, who’s holding a well-used shotgun. I think I have an excuse.

On cue, a large German shorthair pointer bounded out of the house, nearly knocked me over, and then leapt into the back of the old pickup in the driveway. “He may be lively now, but just wait ’til tonight,” chuckled Callie’s dad.

What have I gotten myself into?

Callie started prepping me from our first few dates, though I would never have guessed it. She talked about chukar hunting with her dad and brothers. (Three brothers and an overprotective dad–all well-armed and good shots–I should have come to my senses then and there.)

Instead, I did something very dangerous. I fell in love. And so, when I went home with Callie, I knew a visit with the parents would be in order.

She broke the news with a smile, “Jordan, my dad invited us to go chukar hunting next Saturday. He really wants to meet you.”

“Chukar hunting?” I wasn’t new to shotguns; I’d been doing trap and skeet since I was ten. But there’s a big difference between a fluorescent orange clay and a sadistic upland game bird found in the most rugged terrains imaginable.

“Oh, well, it’s just his way of welcoming you to the family.” Her attempts to brighten the situation were failing.

She gave me a sympathetic look. “I guess you could call it that.”

Most dads enjoy torturing their daughter’s boyfriends; it’s a simple fact of life. Most dads believe that any guy conceited enough to think he’s worthy of dating their little girl deserves what’s coming to him.

But surely this was overboard.

I was standing at the base of a hillside–OK, a canyon face–staring up. You’ve got to be kidding me, I thought. Halfway up the canyon side, a plump bird hopped out onto a rock and looked down at us, chuckling loudly. 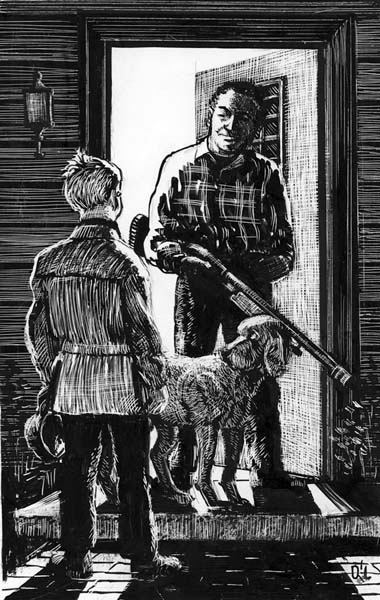 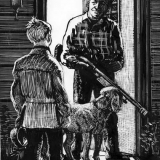 I’m thirty years his younger, but he tends to get an extra boost of energy out of pure sadistic pleasure. As he watched, I practically ran up the canyon, heading for a little flock of chukars behind a rock outcropping.

A brown mess of fur and slobber flew past me up the hill. “Bullet!” I snapped, but the dog ignored me and headed straight for the birds. I picked up the pace, dodging loose scree and trudging through hip-high sagebrush. I was just coming up on the outcropping when an explosion of feathers burst into the sky and repositioned themselves at the very top of the peak. I shouldered the gun too late, but it didn’t matter anyway; Bullet had scattered them before I’d even gotten there. “Damn dog.”

“I didn’t hear a shot!” yelled Mr. Erickson, who was working the next peak over.

“They flushed before I could get to them,” I managed, biting back a nasty annotation. Couldn’t insult Bullet directly–he was the pride of Mr. Erickson’s pack, and his favorite hunting buddy.

“Better move quicker then,” he yelled back, before turning back to his own climb.

You haven’t won yet, old man, I thought. I started up to the top, trying to close the distance between Bullet, the chukars, and me. This time I managed to get in range just before Bullet reached the flock. I brought my gun up, held my eye steady on one bird as it started over the next cliff top, and barely heard a sound as I squeezed the trigger. An instant later, the chukar wobbled in the air and fell dramatically to the ground. Victory! “Go get it!” I ordered Bullet. The dog looked at me dumbly. “Bring it here, boy!” Finally the mutt trotted off in search of the body.

I took advantage of the dog’s search to catch my breath. We’d been going steady since dawn, and the sun was arching higher in the sky. I stood on top of the canyon wall with a view of the entire world.

Long shadows of clouds moved eerily across blue sagebrush plains in the distance, and the bright colors of canyon-land rocks dazzled in the morning sun. From the deep red chasm I was perched atop, I could see the plateaus and peaks stretching out to infinity. Hues of red, purple, pink, black, blue, and dusty brown like the dirt permanently embedded in the soles of my boots painted the scene. The high, thin blue sky collided with the rocky labyrinth of quartz, sandstone, and basalt covered with lichens and scattered blue-berried juniper trees. Besides a ranch house way out on the blurry horizon, it was just us–and a few noisy birds.

A staunch wind picked up, whistling through the canyon, and past the mountains surrounding us. It dried the sweat on my back, and I felt refreshed. So where was that dog–“Bullet!”

The dog had picked up my chukar and was trotting innocently back to its master–which, of course, wasn’t me. Mr. Erickson looked surprised at the delivery. “I didn’t think that last shot hit anything! Guess experience just makes up for it!” he boasted.

The dog was smirking at me. I managed to remind myself of Callie’s stern warning, “Whatever you do, don’t shoot the dog.” . . .  However tempting it might be.

Mr. Erickson surveyed the fresh set of mountains before us. “You wanna take the east hill?”

No one in their right mind could call that thing a ‘hill.’ But it wasn’t a question, really. And if it were, it would be something on the order of, “Do you really think you’re good enough for my Callie?”

The old man was hiking up a slanted drainage to the west, and Bullet was tracking carefully in front of him, being cautious not to get too far out front. I muttered curses under my breath and hauled myself to the top of the most insidious ‘hill’ ever created. But at the top, over the sound of shallow gasps of air, I heard a distinct sound that haunts the dreams of every true bird hunter: kakakakachukarchukar. My heart started pounding again; they were just on the other side of the peak. I forgot about the thousand-foot vertical climb I’d just made and crept over the edge.

Just out of range, but I could change that quickly–oh no. “Bullet! No!” The furry abomination came flying out of nowhere and descended on the flock, scattering the birds to the four winds. (And when chukars scatter, they do it in style.)

Don’t shoot the dog. For Callie’s sake, don’t shoot the damn dog. “Bad dog!” I growled, and it cast me a spiteful look and went to see if it could scare anything else away.

You would think that, as compensation for hellish terrain, beating morning sun, and parched climate, chukars could give us just one simple joy and fly downhill. But no, chukars fly uphill, and that’s where I was headed once again.

Just then, I heard a yelp, and I turned to see Bullet whining and limping a bit. What now? I sighed. “Come here,” I told the dog. He eyed me suspiciously (probably with good reason) and finally swallowed his pride and came. I examined his foot and found a long, deep gash splitting open his paw.

There’s no way he can make it back to the truck like that. I looked around for Callie’s dad, but he was out of sight. I groaned, sat down on the red-brown pebbles, and took off my boots and socks. I fashioned a pair of booties for the mutt and put back on my boots sockless (My feet would be a minefield of blisters in an hour.) Bullet wagged his brown tail thankfully, and I shot him a stern look. “You stay with me, you hear? Heel!”

Amazing, the dog did. I did a double-take as he stiffened into a point and let me come up behind him before he dove forward. I fired and another chukar fell to the ground. This time Bullet trotted back to me and dropped the bird at my feet.

“What happened to my dog?” yelled Mr. Erickson, coming over the top, breathless (and yet, somehow still able to bellow). He started behaving like a real hunting dog, I thought.

“Hurt his paw,” I shrugged. Those are a twenty dollar pair of synthetic wool socks, buddy; you’d better appreciate that.

Mr. Erickson gave me a long look, as if finally summing me up and coming to a decision. “I’d say it’s about time to head back to the car.”

“Sounds good,” I agreed, looking out over the distance we’d covered. Now if only I was wearing socks for the hike back  . . .

We made it to the truck as the sky was turning into a pink and yellow masterpiece. We sat on the tailgate to watch the sunset, and sparse juniper trees made black silhouettes against blue twilight as the night began to hum around us. The last orange rays stretched out in front of the bumpy dirt road as Bullet slept soundly in the back, and Mr. Erickson couldn’t help let a grin cross his face. All my anxiousness faded into exhaustion as we pulled up in front of Callie’s apartment. She was waiting for us–trying without success to mask her famously worried expression.

After a well-deserved peck on the cheek, I went to pull my socks off the dog’s paws and gather my gear. From the front of the dusty cab, I heard him mutter quietly, “He’ll do, Callie. He’ll do.”

“I thought you’d say that,” she whispered back.

With a kiss for Callie and a handshake for me, Mr. Erickson made his exit. “We’ll have to do this again sometime, son.”

Dear God. “Yes, sir,” I replied with a smile. As the pickup rolled down the street I turned back to Callie, “So, did I pass?”

“Of course! He thinks you’re wonderful.” ‘He’ll do’ translates to ‘wonderful’? She put a warm arm around me and sniffed the scent of sagebrush still hanging on my jacket. I suppose a walk through the beautiful canyon-lands isn’t too much to ask for the girl of my dreams. I tried (in vain) not to limp too much up to the front door, and Callie hugged me tightly in the balmy summer air.

Then she leaned in close, and whispered, “Just wait ’til you meet my mother.”