Posted on by Dave Clark

Craters of the Moon Lessons

Story and Photos by Dave Clark

“It’s like black vomit from the bowels of the earth.” That was the graphic reaction of an emigrant in the 1860s when crossing the lava fields of what is now the Craters of the Moon National Monument in south-central Idaho.  That colorful description was probably the most critical ever expressed about this volcanic landscape, but the negative comment most commonly heard at the visitor center desk is, “This place is nothing but black rock.”

After working at the monument for more than twenty-five years, this phrase came to aggravate me every time I heard it. I wasn’t aggravated by the visitors, but by the fact that I knew that none of these visitors had really given themselves a chance to experience the place at its best.

Visitor surveys done at the park showed that statistically nearly all visitors to Craters of the Moon arrived between 10 a.m. and 3 p.m. sometime during the months of July, August, or September. The problem with visiting the lava beds during this time is that all you experience is an overpowering, parching sun, a drying and too persistent wind, and a stark, seemingly lifeless, dark landscape.  No wonder so many visitors never return and so many Idahoans fail to identify the place as being as beautiful as Yellowstone or the Grand Canyon.  Given a chance, however, I am convinced that anyone who followed these simple rules would come to view Craters of the Moon as equal to those scenic places.

Rule #1:  Visit the monument early or late in the day

The monument is a different place near dawn or dusk. The first thing you realize is the terrain isn’t really black at all. Much of the rock is a dark chocolate brown, but there are streaks of pure red bisecting the cinder cones where steam exited the ground and caused iron-rich lava to oxidize (rust). The cinders are not black, either. They are covered in iridescent blues and silvers that resulted because of a quick cooling that caused a thin coating of volcanic glass to form. And the lava flows so colorless in bright light really have surfaces of cobalt blue or jade-green caused by trace elements picked up by the magma as it moved up through the earth’s crust. 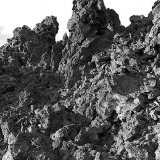 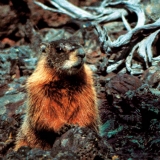 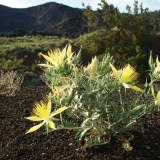 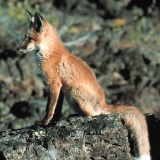 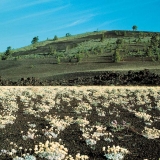 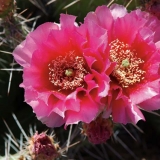 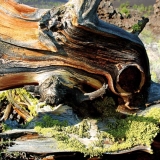 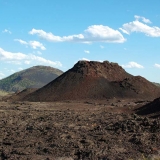 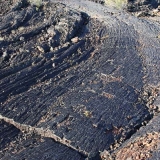 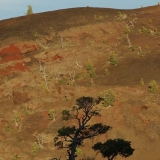 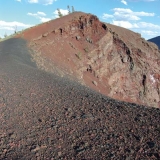 Jagged “clinkers” formed from Aa lava at the Craters of the Moon. 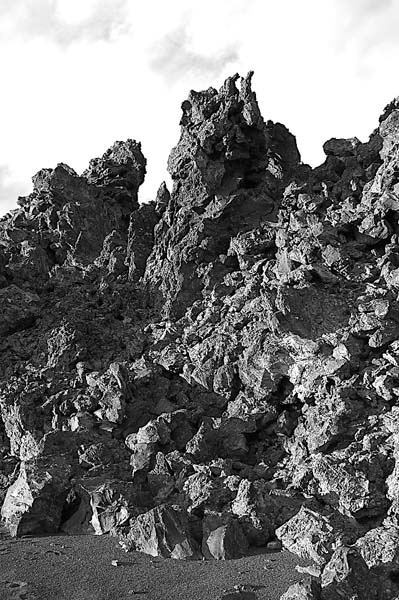 A marmot emerges from winter hibernation in April. 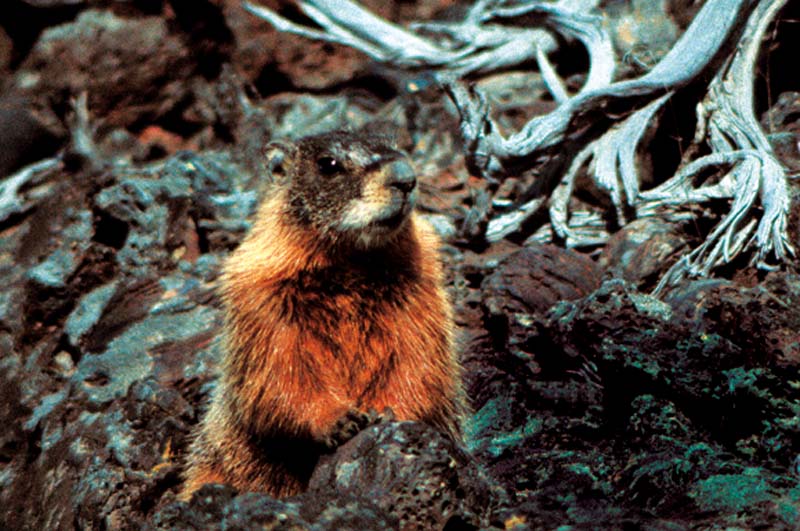 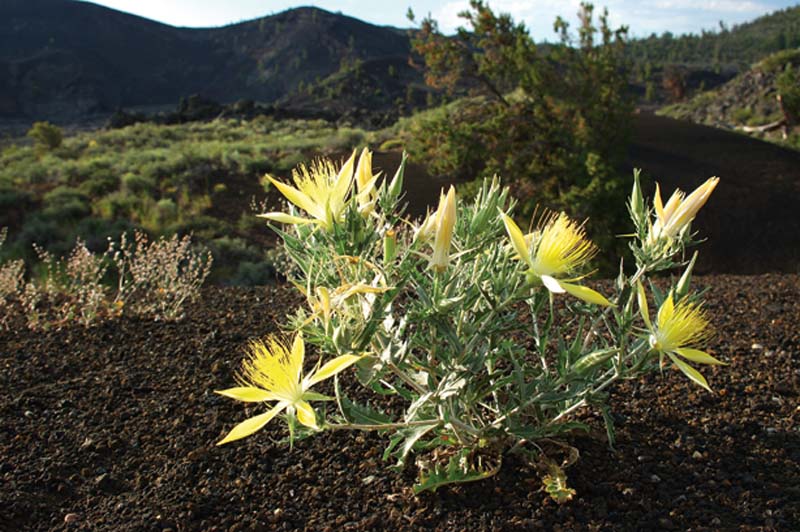 The red fox is protected within the monument’s boundaries. 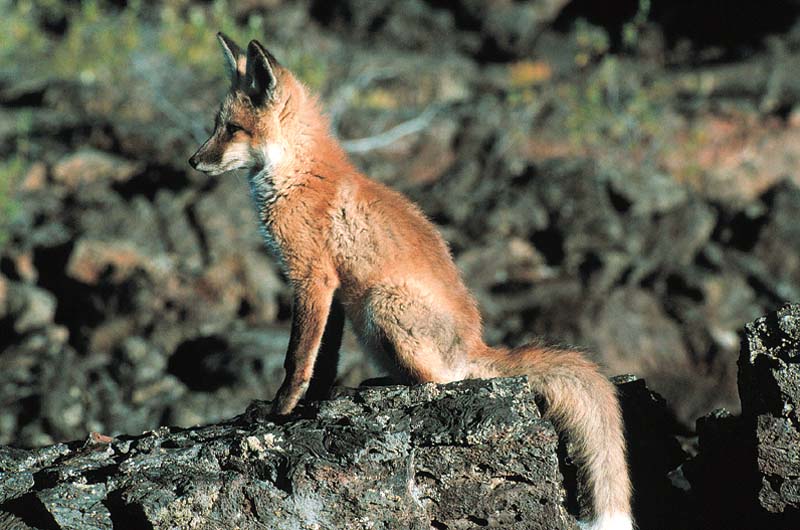 A cinder field covered in dwarf buckwheat contrasts with the Inferno Cone. 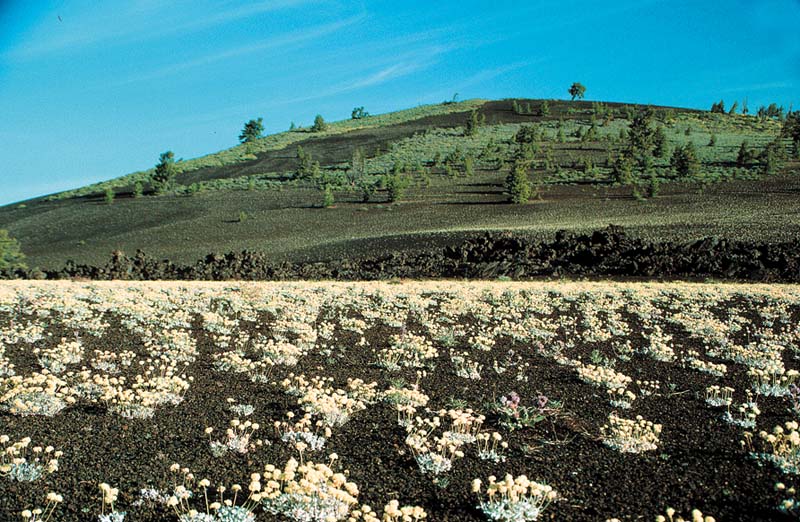 Blossoms of prickly pear cactus can be red or yellow. 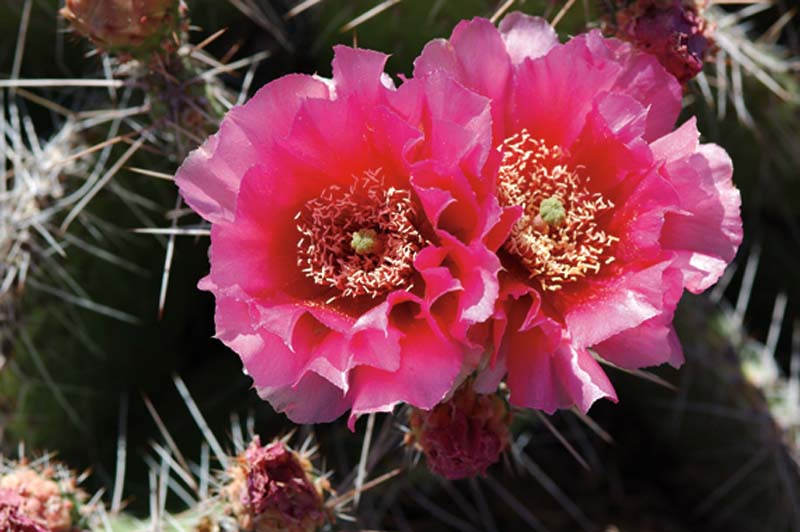 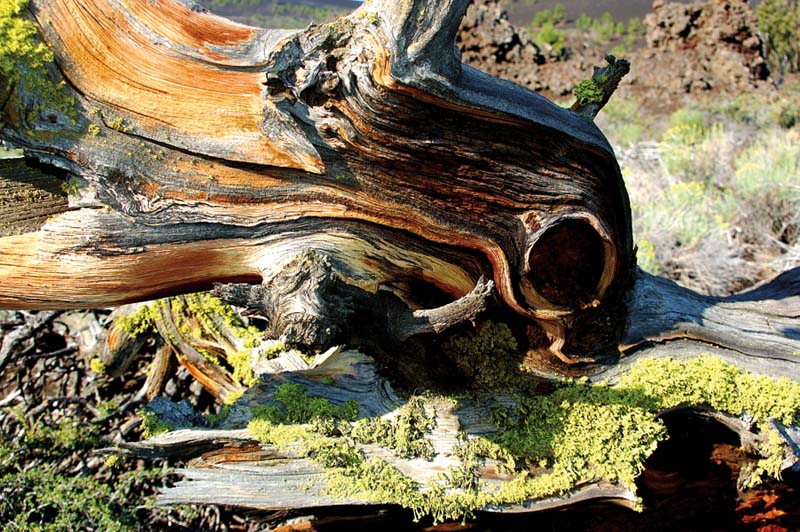 Spatter cones are the area's most distinctive geologic features. 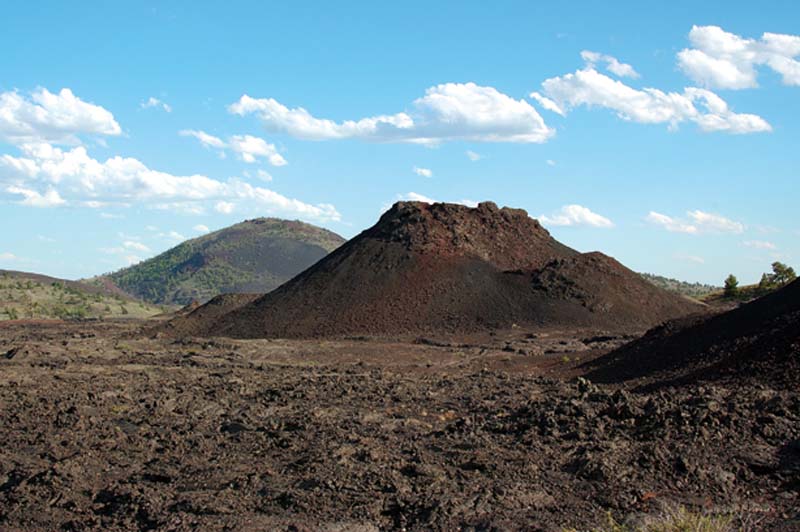 After cooling, pahoehoe or “smooth lava” can resemble a frozen stream. 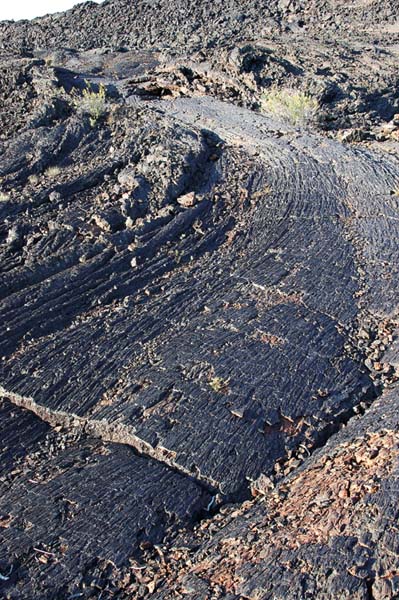 The red cinders of North Crater. 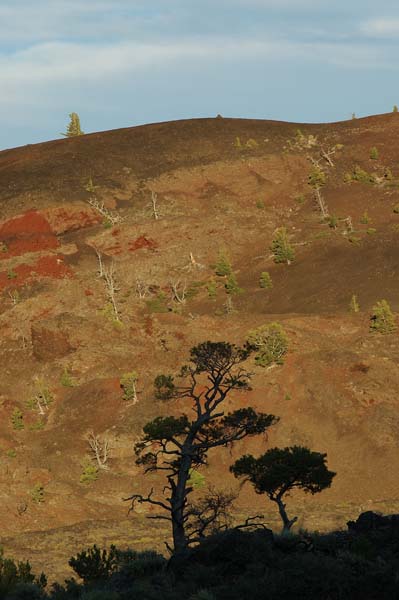 At Big Craters, the red cinders were caused by oxidation from steam. 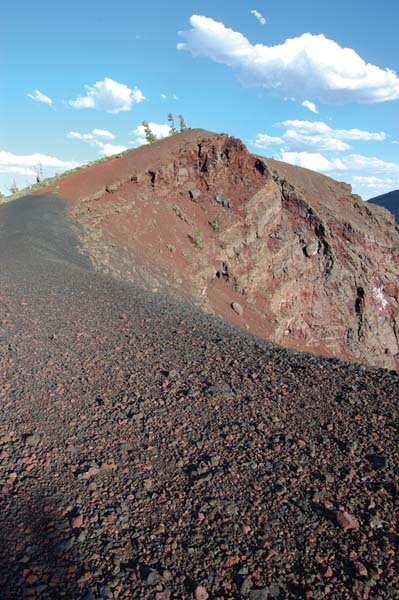 At these times of day, your senses are not overwhelmed by the sun’s brilliant light–that creates the impression that the lava flows are bleak and barren. You realize plants are virtually everywhere at the monument.  Limber pines, rabbit-brush, and sagebrush on the low slopes of the cinder cones, and numerous islands of vegetation are scattered throughout the lava flows. And on even the most recent of flows, you can see a multitude of different-colored lichens and mosses.

Getting out early or late allows you to experience an environment that is anything but lifeless. Mule deer are up and feeding.  Marmots are gathering one more meal of grass or herbs.  Forested areas that are silent during the heat of the day awaken with the calls of dozens of different species of birds. The wildly diverse environments resulting from different types of eruptions provide many niches that support nearly fifty species of mammals, more than 150 species of birds, and more than 350 species of plants.  Hiking any of the park’s numerous trails in the mornings or evenings offers many chances to catch glimpses of any of these animals.

Rule #2:  Visit the monument sometime other than summer

While there is nothing wrong with visiting the monument in the summer (if you follow Rule #1) most people don’t realize that the other seasons of the year also offer their own matchless experiences. Springtime actually comes to the park rather late in June. But at Craters, just like in the meadows of Idaho’s mountain country, spring brings out the wildflowers.  Every year, the bloom of flowers burst forth with a rainbow of colors: the blues of the larkspur, yellows of the arrow-leaved balsamroot, and the pinks of the evening primrose and wild onion.

Cinders are covered with thousands of the dime-sized dwarf monkey flowers until the dark cones are covered with a magenta-tinted blanket.  Dwarf buckwheat, with their pale yellow pompoms, grow as small mats of vegetation with such precise spacing between each plant that people often think they have been planted by hand.  Yellow desert parsley, red Indian paintbrush, and red, orange, or yellow prickly pear cactus grow where windblown dust has collected in the cracks that dissect the lava.  Surprisingly, lush ferns grow in the deeper cracks where conditions are cooler and moister than near the surface.

In the fall, the heat of summer disappears, giving way to chilly mornings that turn into warm, pleasant afternoons.  The wind seems to blow least during these months and the vegetation tends to take on a yellow-orange hue that just makes you feel good.  Hiking is never better than in the fall and longer trips into the wilderness are not the death march they can be in the summer.  A chance to camp overnight at Echo Crater and to experience some of the last pure, unadulterated solitude found anywhere is an opportunity only a few people take advantage of each year.

Winter brings an entirely different appearance and feeling to Craters of the Moon.  As several feet of snowpack accumulate, colors disappear, and the scene is one of black and white.  But the stark contrast gives the place an unearthly feeling that is unlike anything most people have experienced.  Because the loop drive is closed in the winter, the monument is visible only for skiers or those on snowshoes.

The park provides a groomed trail approximately five miles long. It’s one of the better trails in Idaho. The equipment used to set the track is the same as that used in the Winter Olympics held in Salt Lake City and can be used by cross-country skiers and snowshoers.

Rule #3: Take advantage of the programs offered at the monument

It is unlikely you have ever experienced a landscape such as the one found at Craters of the Moon.  Because of this, it is very difficult to understand what you are seeing, how it came to be, and what can be expected to happen here in the future.  Why are the smooth lava flows called “pahoehoe” and the flows of jagged, sharp clinkers called “aa”–or for that matter why do two types of flows exist in the first place?   The National Park Service considers it very important to provide answers to such questions. The park staff strives to provide visitors with an opportunity to understand and appreciate the park.

Certainly the exhibits in the visitor center, the trailside panels, and the park’s publications can explain many of your questions, but the best way to learn and experience the park is to attend one of the programs or walks provided by a ranger naturalist.  You have the opportunity to see things up close, ask all the questions you want, and be in the company of someone whose enthusiasm for this fantastic place is infectious.

During the summer, walks and evening programs in the campground are provided daily.  Hikes are taken into the lava tubes (caves attract the most interest of any feature in the park), but the hike most recommended is the Buffalo Caves hike given each morning. This hike leads to a little-used area of the monument and in the course of two miles visits nearly every type of volcanic activity and vegetative type to be found. At the halfway point, visitors are taken into Buffalo Cave, a lava tube, for an underground tour.

On Saturdays during the summer, special walks are provided for people interested in taking detailed looks at park themes. Hikes are made available for those interested in wildflowers, birds, geology, wilderness, and a variety of other topics.  Participants get special attention from park staff and are taken into many areas that are seldom visited by others.

During the winter months, winter ecology programs are provided on most Saturdays.  These programs provide a background on what wildlife is doing during this period and discuss winter travel and safety. Classroom work is combined with a snowshoe hike that is perfect for first-timers. Snowshoes are even available for those who need them. All of these activities limit the number of participants, so you need to contact the park to make advance reservations.

In all my years at Craters of the Moon, I always felt let down when a visitor told me that they weren’t very impressed with the place. It wasn’t the visitor’s attitude toward the park that bothered me, but the fact that I knew they would have felt very differently if they had just altered their visit a bit. The one constant I observed was that anyone who got a glimpse of the true park was never disappointed. Those who got a really good look never failed to love it.