When the author joined a memoir-writing group, it inspired her to chronicle part of her youth spent at her grandparents’ place in Kilgore. Following is a chapter from that memoir, My Grandfather’s House, published with permission.

In front of a camera is a laughing bevy of young women, having prepared for several minutes to hold this pose, too close to each other, so close they could smell the unperfumed soap in each others’ hair, they lean in to be certain all will be captured in the photo frame. This technology is new and the camera has a broader range than the cameraman’s experience could anticipate as he motioned to gather close in. Whoever was the chosen cameraman pressed the tiny lever allowing an instant flash inside the camera’s dark chamber, the beam rearranging the molecules of sensitized silver recording this infinitesimal moment of time on a bright Sunday morning giving it the power to last a hundred years or more.

The young women defying the snow, measurable on a yard stick, proud of their spring attire, stand outside the Kilgore store, their coats, a mother would hope, hidden just off camera. The dresses they wore were made from patterns or ordered from a catalogue. Impeccable tailoring was intended to show off their graceful, strong posture. There is a fluted ruffle topping an arm, fashionable oversized buttons following a dramatic outlined lapel or placket. They stand in their best summer shoes in the road’s packed snow. These are the women that have matured in the Depression. They know their value to the community and their value to their prospective husbands far away from home in the service of their country. These are the women that inspired the luscious pinup calendars of the forties, the ritual of turning the monthly page of the calendar meeting with both anticipation and a twinge of regret for the previous retiring pinup page. The world celebrated these strong young women. A soldier would be proud to return home to her embrace.

Not much more than a decade later their daughters would be training to migrate to the city for a more sophisticated life, sitting at desks, typing their bosses’ dictation, their breasts molded into torpedo- shaped bras and their waists cinched as near as possible to the coveted twenty-two inches. Not so their mothers. These were women that could don rubber boots with an up-the-front row of metal tongues locking into hasps across the boot’s gusset to wield a pitchfork as easily as they turned a pancake or twisted a pin curl and fastened it down with a bobby pin. In another setting they would be riveting ships together and rolling hand-knitted cotton bandages for their soldiers. 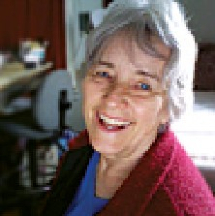 LeeAnn Garton is a third-generation Idahoan in an expanding population who walks the foothills looking for arrowheads and fish bones but finding wildflowers, while wondering if science will define our problems and give us permission to improve the planet, or if we should make a better world for no reason at all.
View all posts by LeeAnn Garton →
ORDER BY MAIL