Confessions of a Backpacking Wimp

Posted on by Hayden Seder

Story and Photos by Hayden Seder

Exhausted and filthy, I collapsed on the shuttle dock at the far side of Redfish Lake. I tossed my backpack aside, unable to stand looking at it anymore. My three friends and I had just descended from a backpacking trip to Saddleback Lakes—also known as Shangri La or Elephant’s Perch—and had missed the most recent shuttle by ten minutes, which meant we would have to wait another hour for the next. All I could think about was getting back home to Ketchum to order Thai food and watch the new episode of Game of Thrones. As more people filled the dock to await transport to the main side, they took a look at us (or more likely, at me) in our filth and exhaustion and asked how long we had been out there.

“One night,” I replied, grimly accepting that I was a backpacking wimp.

When my brother and I were growing up in Idaho, our parents forced us to hike and backpack incessantly, which instilled in us a hatred of those activities for most of our youth. Not only was trekking numerous miles tiresome for a seven-year-old but at that age I had not yet learned to appreciate the outdoors. I spent the entirety of our trips into the wilderness complaining and trying to figure out ways to pass the time. When I reached my teenage years, I avoided outdoor activities like the plague and even went so far as to attend college in New York City, where words like “hiking” and “outdoors” are heard about as often as “rent-controlled apartment.”

And then, after spending some of my formative years in a city that was focused on expensive cab rides and club openings, I realized I was bored because I—gasp!—missed the mountains of the West and the ability to jump in a river or have a bonfire or camp for the weekend just outside town. When I returned home after college, the mountainous land I had grown up in reinvigorated me, and I began to love hiking, rock climbing, mountain biking, and a slew of other such activities.

But not backpacking. I was still on the fence about having to carry a heavy pack while hiking for miles, even though I was willing to give it a shot for the first time in my adult life. My friend Amy was living in Stanley for the summer and suggested we backpack up to Saddleback Lakes as a means of dipping my toe in the water. After all, the hike is only 6.7 miles total or 3.35 miles each way—how hard could it be? 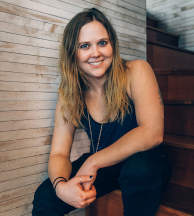 Hayden Seder is a freelance writer and copy editor based in her hometown of Ketchum. Since graduating from Sarah Lawrence College in New York in 2010, Hayden’s work has been published in numerous publications, including Idaho Press, Boise Weekly, Bitch, Backpacker, Matador Network, and more. When not putting pen to paper, Hayden loves rock climbing, snowboarding, and mountain biking.
View all posts by Hayden Seder →