Posted on by Charlene Aycock

Stories behind a Little-Known Place

Story and Photos by Charlene Aycock

The first time I stopped in the very small town of Corral, on the Camas Prairie off Highway 20 near Fairfield, was in September of 2003, to take a picture of what I thought was a historic church. This white building, which has a lot of character and looks great against a deep blue sky, is a favorite among photographers. I have since revisited Corral many times to photograph the very western red store, the old schoolhouse (which I had thought was a church), the grain elevators, the former train depot (now a home), and various barns, outhouses, and residences. Seeking more information on the town, I searched online, but found no details at all—no history, no population, nothing. All I knew of the place was its name.

In August of 2012, when the Trinity Ridge Wildﬁre in the mountains near Corral caused a lot of smoke in the valley, I decided to drive up the highway to see what I could capture under the smoky skies, which I knew can become a natural filter of harsh light, creating special opportunities. Noticing the sky had turned pink, I headed east toward Corral to take pictures of the school. Light changes rapidly with conditions and the sun’s movement, and I was fortunate to get the shot I wanted, with the pink sky in the background. The image became popular, prompting Debbie Wilson, the granddaughter-in-law of the building’s current owner, to contact me about buying prints. She also told me about the origins of the school and asked if I would be interested in meeting the current owners. I said I would love to meet them, as I very much wanted to learn more about the schoolhouse and the town. 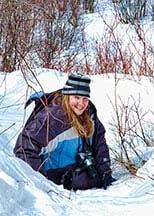 Charlene Aycock taught herself photography from books, online classes, and through trial-and-error. She always loved photography, but the cost of equipment was out of reach. Her grandfather introduced her to the work of Ansel Adams, and her passion became the exploration of light in nature. She and her husband Gerald, who live in Mountain Home, have a total of five daughters and eleven grandchildren.
View all posts by Charlene Aycock →