Posted on by Kaitlyn Farrington

Spurred on by Idaho Toward the Winter Olympics

The author, a snowboarder from the Wood River Valley who specializes in the halfpipe, is vying for a spot on the U.S. team to compete in February at the 2014 Winter Olympics in Sochi, Russia. The squad is expected to be finalized by January 19. Kaitlyn learned to snowboard in fifth grade, was a silver medalist in the 2008 Junior World Championships, won a bronze and finished fifth twice in World Cup events this year, and then placed fourth in the World Championships. It hasn’t come without hard knocks: she has had five wrist surgeries. Here, Kaitlyn recalls the influence of an Idaho upbringing on her development as an athlete.

I used to go on really long four-wheeling rides to this place we called “Up Top.” It was our other piece of land, a little more than 250 acres. All over Up Top were natural springs, where I would swim during the summer. Up Top was my getaway. 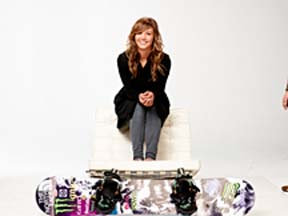 Kaitlyn Farrington was raised on a ranch near Bellevue, where she became involved in athletics at an early age. Winner of the 2010 U.S. Snowboarding Grand Prix and a fourth-place finisher in this year’s Snowboard World Championships, at this writing she is vying for a spot on the U.S. Winter Olympics team.
View all posts by Kaitlyn Farrington →