Posted on by Wayne Eskridge

Change Yourself, Change the World

There are moments in life you never forget. They don’t fade much with time and you can go back there, even if you would rather not, and remember them with crystal clarity. Whenever I go to a health care facility, it inevitably takes me back to a morning in late December 2010, following my gallbladder surgery. Having been released from recovery a short while previously, I found my Boise hospital bed surrounded by a sea of white coats. Sitting nearby was my wife Rosemary, tears running down her cheeks. The doctors said during my procedure the surgeon had discovered my liver was badly scarred.

“You have stage four cirrhosis,” one said.

Try that on soon after being under anesthesia if you want a hormone rush. I remember the cascade of thoughts clearly: “That can’t be, I’m not an alcoholic. They must have the wrong room. I don’t have any symptoms. Why is my wife crying?”

Denial, so easy for us humans, bloomed in all its glory. But my defenses wilted when the doctor said, “I’m sorry, we have no treatment.”

We all know we’re going to die, it’s not a mystery. But for me the end always had been, rather typically, a philosophical concept somewhere in the background. A few weeks after my surgery, while waiting to see my gastroenterologist, it finally hit me that the Angel of Death might truly be at my door. I almost fled. From then on, the doctor’s waiting room became a challenge, since what I faced could be terminal. 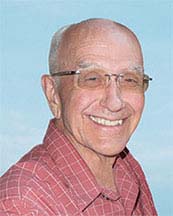 Wayne Eskridge is an engineering graduate from University of Idaho whose career has embraced technical, managerial, and executive positions in public and private corporations, from startups to Fortune 500 firms. Wayne currently is CEO of the nonprofit Fatty Liver Foundation, fattyliverfoundation.org
View all posts by Wayne Eskridge →