Homage to a Medical Couple

A dog-eared supply of magazines (Good Housekeeping, Boy’s Life, Saturday Evening Post, Readers’ Digest) decorated a glass coffee table and bookshelves, a gurgling aquarium featured angelfish and goldfish, checkerboard linoleum covered the floor, and very soft lights seemed more like those in a bar than a doctor’s office—but then, this doctor’s office was in a basement.

An antiseptic scent hung in the air that I would recognize years later as anise. This indelible memory comes from my 1950s childhood: walking into the offices of Dr. John Moser and Dr. Margery Moser in the old Valley County Hospital in Cascade.

The Mosers landed in Cascade just prior to 1955, after a post-medical school tour in John Day, Oregon. They both had graduated from Case Western Reserve University School of Medicine in Cleveland in 1953 and had done internships at the Cleveland Clinic before moving west. Dr. John, born in 1917 in Pennsylvania, and Dr. Marge, born in 1919 in Ohio, met shortly after WWII, in which he had served as an Army Air Corps pilot, flying many C-47 missions over “The Hump” in China, Burma, and India.

Inheriting their practices from several doctors associated with the early years of the Valley County Hospital, which was built in 1942, they settled easily into medical service in the county. People closest to them described them as very private in personal life yet very vocal in public life. 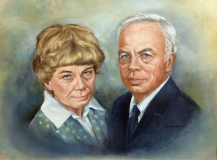 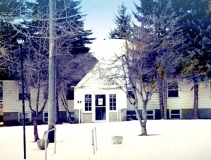 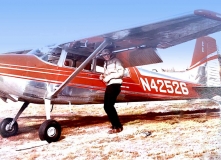 Portrait of the Mosers, courtesy of the artist, Rainee Scott. 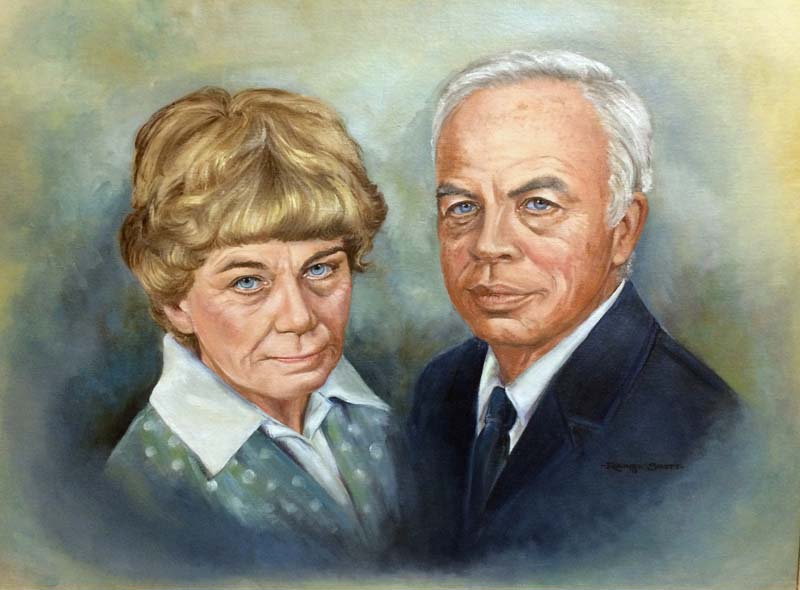 The current hospital in Cascade. Courtesy of Cascade Medical Center. 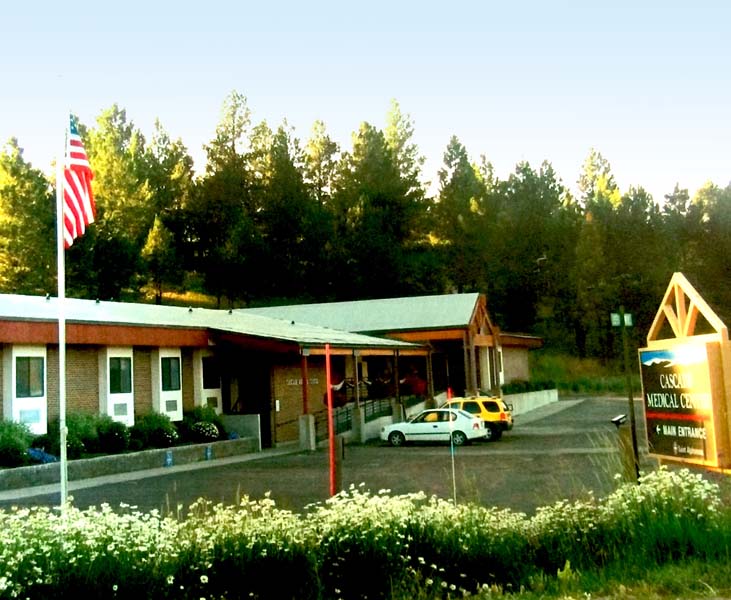 Bill Wheeler with the med-evac plane. Courtesy of the Wheelers. 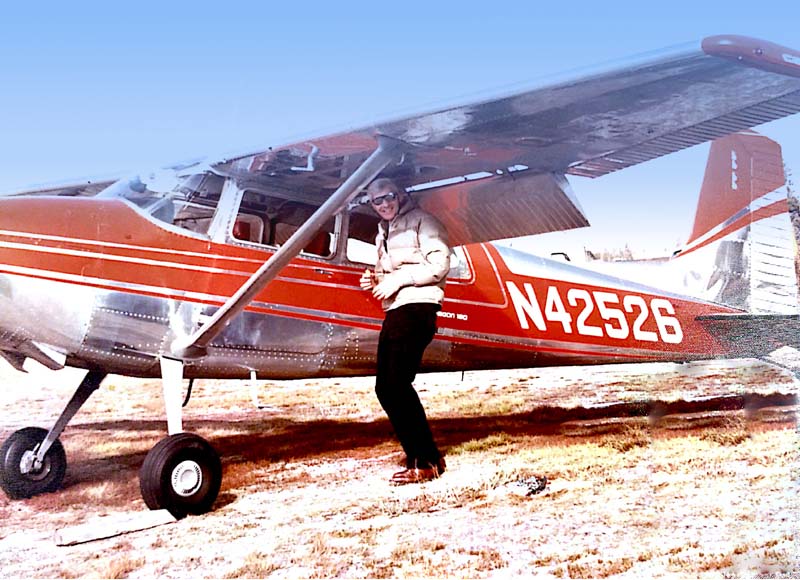 Dr. John had a reputation as a crack diagnostician, and Dr. Marge was popular with women of the county as the only obstetrician-gynecologist in a one-hundred-mile radius. While Dr. John did some surgeries, many were referred to Boise, where the operating rooms were better stocked. Sometimes a surgeon would come from Boise to help him with a surgery.

Medical associates say that once Dr. John assessed a condition, it always made everybody feel comfortable and safe. The good doctor claimed this had a lot to do with his stethoscope. When he put it on and listened, everyone became quiet. He said sometimes he didn’t have to use it but he did anyway, admitting that it settled everyone down when he put it to his ears.

The boomer generation brought the couple a large caseload of births. The doctors also helped polio patients in central Idaho to secure the treatments they needed. When a nursing home in Riggins burned in the 1960s, the Mosers brought that town’s federally supported patients to Cascade and treated them until new care facilities could be arranged. The years also saw a lot of farming, ranching, and heavy timber-related accidents, as Cascade was still a blue-collar mill town and agricultural center.

Dr. John was a lay minister in a Cascade church that was too small to have a fulltime minister. He also served on the local school board and eventually joined the Valley County Planning and Zoning Department. He gained a reputation as hard-nosed on zoning and building issues. Patricia Scott, who worked for the Mosers beginning in 1967, told me recently, “The community respected Dr. John for standing up for building codes, for safety reasons primarily, but also he didn’t like poor-quality building structures. He tried to establish standards.”

She described the Mosers as highly dedicated to the community, “helping all the time, in every way. They were quiet, didn’t want attention. Cascade was mostly a logging community at the time. If they saw something that needed to be done they just did it, even if the cost was theirs.”

Other locals characterized the Mosers as very generous, and close friends said they often wrote off medical bills, especially for widows and those on welfare or otherwise challenged. Sometimes ranchers paid their bills with grass-fed beef, too, which the Mosers publicly stated they preferred to feedlot-fed beef.

Bill and Jo Ann Wheeler, owners of a pharmacy in Cascade, spent much time with the Mosers beginning in the 1970s, because they rode in the ambulance as emergency medical technicians trained out of St. Luke’s Hospital in Boise. The Wheelers and Mosers also joint-ventured ownership of a medical evacuation aircraft that served Valley County and the backcountry. They flew many missions together, bringing in emergency cases to Cascade and Boise from as far away as Yellow Pine.

Prior to the med-evac operations, Dr. Moser flew his own small plane in Idaho’s backcountry, mostly for fishing and hunting, but sometimes to help with an emergency. In the late 1960s, Dr. John crash-landed his plane in a tangle of electrical wires near the airport runway while carrying passenger John Eaton of Cascade. The doctor’s plane was destroyed and he sustained severe leg and back injuries that took him nearly four years from which to recover. His passenger walked away with bruises and scrapes.

Dr. Marge always refused to fly with Dr. John in a small plane and whenever he lifted off with friends heading for a vacation site, she showed up later, after deplaning from a commercial airliner.

Socially, the Mosers attended or provided many private dinner parties. Jo Ann Wheeler told me that Dr. Marge enjoyed entertaining and always provided a full buffet for guests. When she served individuals at her dining room table, however, she demonstrated the latest in dietary sensibility, making sure that each guest had conservative, equal, and healthy portions. “She was always very fit,” Jo Ann said, “and always was sensitive to a healthy diet.”

While she set the table, Dr. John played the piano for guests, without using sheet music, and the evenings always evolved into his taking song requests. “He played and played into the evening, mostly popular but also classical pieces,” said Jo Ann. “He and Marge frequently attended philharmonic concerts in Boise. We all played bridge, too. Marge was serious, but John was very skilled. He had played for bets in the service and often won games before they really got started.”

The Mosers were very political, and environmentally conscious. Dr. John liked to talk conservation and water issues with ranchers, loggers, and bureaucrats. He was not shy about his opinions.

Dr. Marge, a breast cancer survivor, had largely retired by 1971. She saw a few patients privately after that. She died in 1983. Dr. John retired in 1986 and remarried. He suffered from Alzheimer’s disease and in his last years in Cascade he sometimes showed up downtown, often in inappropriate attire. He always was taken back gently to his residence by someone who cared about him. He eventually resided in the nursing home in McCall, and later moved to an Alzheimer’s unit in Boise, where he passed away in 1996.

Whenever I think of the Mosers, a vision of that basement office still arises in my mind. Like everyone else who knew them, I remember their long service in Valley County with the fondest affection.

F.A. (Floyd) Loomis writes about Idaho and its people. He is the author of The Upper Burnt Ruby Creek Triology, Vol. 1 Frankie Ravan, and Vol. 2 Ravan's Winter. Both books have won Idaho Author Awards. He is working on Vol. 3 Confluence of Spirit. A businessman and author, he lives in Boise with his wife Kristin.
View all posts by F.A. Loomis →
ORDER BY MAIL