Posted on by Joan Hawkins

An Early Entry to the Territory

I grew up on a farm about ten miles south of Malad City. With an older sister and brother and a younger sister and brother, I was smack dab in the middle of our family. When I was young in the early 1950s, we went to town once a week to shop for groceries and run other errands. If I was with my mother, we almost always would go to one of the three clothing stores, my favorite of which was J.C. Penney, because I enjoyed watching the zip line. When a sale was made, the clerk wrote a ticket and sent it with the money by a mechanical device to a financial clerk on the upper floor. She then sent back any change and the receipt.

On special occasions, Mom and Dad would take all four of us children (my baby brother wasn’t born until 1956) to a local store that had a huge candy counter, where we would spend what seemed like hours trying to decide what penny candy to buy. We went to the movies at the old Aldea Theater until the Star Theater was built, both of which are now gone.

A real treat was to accompany my grandmother, Nellie Parry Ward, when she visited town. We always stopped at the drug store to have a soda or ice cream, while Grandma received a supply of discarded crossword puzzle books. Her friends who worked in other stores always joked with her, and she seemed to brighten their day. I remember when I went once with my dad to the barbershop, he didn’t make an appointment. The men just went in and waited for their turn, reading magazines or visiting with others.

When I grew older, I took piano lessons every Friday, and my mother started doing her shopping on that day, so she could take me home after my lesson. When I was a teenager, if my girlfriends and I were lucky enough to get access to a car, we would visit the Malad Drive In, and then drive up Main Street and over to 100 West, where there was a stoplight (it’s now a four-way stop), and then we’d go down Bannock Street and up Main again: cruisin’ Malad. 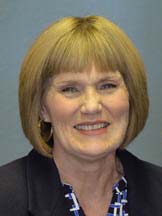 Joan Ward Hawkins was born and attended school in Malad City, earned a business degree in Salt Lake City, and moved back to Malad in 1970. She has two sons, Charles D. (Chuck) Moon and Justin B. Moon, a daughter, Jenny Rae Hawkins, two grandchildren and a great-granddaughter. Part-owner of Scott’s Land Title Company and a reporter for The Idaho Enterprise, Joan is active in many community and church groups, was long a member of the Malad City Council, and currently is the city’s mayor.
View all posts by Joan Hawkins →