Story and Photos by Mac Tippins

Trees snapped like matchsticks. It sounded like a firefight in Vietnam. I tightened my grip on the steering wheel of the old pickup, cringing at the specter of falling snags. Among wildland firefighters it is said that wind changes everything, and we were running the gauntlet of a blowdown event.

The Ramshorn fire crew, which had come to Pinyon Peak out of their base at the Yankee Fork Guard Station, was a half mile or so ahead of me in a Forest Service utility vehicle (UTV). What if a snag blew down between us? I pushed my truck a little harder. We traversed dense sections of burned trees, the standing dead among them guarding old fire scars.

Almost as if we were a tag team, the Ramshorn crew would stop and clear blowdown that blocked the road, which allowed me to catch up in my pickup truck. It was quick hand-saw work and they would speed off again, ahead of me. We had about eight miles of fire scars and avalanche chutes to traverse on an incredibly rough road.

I caught up with the fire crew again at the Seafoam-Pinyon Peak road junction. They were loading the UTV onto a trailer. “Get on out of here,” the crew boss yelled to me. “It’s getting worse. This wind and blowdown can kill you!”

A few hours earlier, the wind had started picking up on Pinyon Peak, elevation 9,945 feet. Several members of the Ramshorn crew arrived at the fire lookout around noon to help me close up for the 2020 fire season. My supervisor had called me shortly after I went on duty at 9:30 a.m. that day, September 7, Labor Day, with the news:  my fire season was over and I was ordered to pack up and get out of the wilderness, immediately, ahead of the forecasted windstorm.

By the time the Ramshorn crew arrived in the UTV, I had already loaded my truck with personal gear. There was a large propane tank to load onto the government utility vehicle for backhaul, and the shutters of the lookout had to be dropped and locked. I helped, knowing from Aerodynamics 101 that the rapidly increasing wind speed would soon make working with the big shutters impossible. It was cold, and the temperature was dropping. 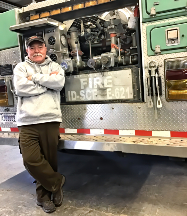 Mac Tippins is a retired airline captain who has been a US Forest Service fire lookout for nine seasons. He also is an Emmy-winning photographer and videographer, an airline accident investigator, and an aviation writer and editor. Mac flew more than two hundred air combat missions in Vietnam, Laos, and Cambodia. He studied at Auburn University and the Georgia Institute of Technology. He lives in South Carolina.
View all posts by Mac Tippins →
ORDER BY MAIL