Posted on by Helen McMullin

Now Just a Dot on the Map

When I asked my cousin if she’d take photos to accompany a Spotlight City article on Farnum, she snickered. “You don’t need a spotlight. You need a microscope.”  She’s right. Farnum is enough of a ghost town that we think even the ghost has moved away.

Nevertheless, my cousin still lives in Farnum, the fourth generation of Bratts there. I was born in California, but in 1946 my folks came back to Idaho and we lived in Farnum until 1955, when we moved to Drummond, taking our house with us.

Farnum was never all that big to begin with.  Most of the community was made up of farmers and their families living on homesteads, with a few families living around the post office/store in both Lillian and Farnum.  In 1930, the year-end report for the Farnum LDS Ward listed a membership of 173 persons, 45 of whom were children.  I’m still looking for census records, but since most of the settlers were LDS, this is probably the best head count available for the community.

Earlier church records describe the ward as “a scattered settlement, extending up and down Fall River for a distance of fifteen miles, and from north to south it has a width of about ten miles. The center of the ward, where the LDS meeting house is located, is six miles southeast of Ashton, and about the same distance from Marysville. It is also eight miles northeast of Chester and eighteen miles by nearest road northeast of St. Anthony.”

In 1896, Willard Green and his wife, Rosamond Farnum Sprague Green, moved to Farnum, settling along Fall River. About 1904, his son Silas, his wife, and three children joined them. Silas built a store, which was made of finished lumber, with a tall square front painted white with a big general store sign on the front. The store sold a wide selection of articles needed by the residents in the rural area and also housed the post office, which remained open until 1921. Silas named the post office “Farnum” for his mother, and the name gradually became applied to the whole area. 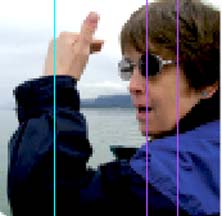 Helen McMullin is a fifth-generation Idahoan who grew up in Fremont County. She worked as a park ranger at Yellowstone and Grand Canyon National Parks and as a computer specialist for BLM. Helen, who now enjoys retirement in Idaho Falls with her husband, volunteers for the Museum of Idaho and is a freelance writer and blogger.
View all posts by Helen McMullin →