And a Lot Farther Back

“This is not good, not good at all,” I lamented as we stumbled upon the entrance to the White Clouds Wilderness. The sign clearly indicated no bikes allowed. Wait, what? We had just ridden miles over roots, rocks and generally rough, steep terrain, hoisting our bikes over acres of deadfall, and were really hoping for a road to somewhere, preferably one that led to Highway 70. We were now fifteen miles into our “five-mile” bike ride and super-eager to get out of this burned-out forest. Dejected, both that our sense of direction had failed us and that we were sure to miss the highly acclaimed dinner at the lodge, we were bummed and I’m not gonna lie … a little bit scared.

It was already 6:30 p.m. and the sun would be setting soon. With miles of bumpy trail to retrace in the dark, and no hope of getting back before midnight, we couldn’t think of riding our bikes, so we ditched them under some bushes and booked it on foot, hoping to reach the summit by dark. Oddly, we had no flashlight, no map, no warm clothes, and no food—not even a granola bar. This was going to be a long, cold, hungry haul, and we had no idea if we’d ever see our bikes again. I loved my mountain bike, but this was no time for regrets, our lives were on the line. We only hoped the Forest Service would understand when they found three bikes abandoned at the edge of the wilderness.

This is not our normal modus operandi — my husband Iven always carries a map, our daughter Courtney never leaves without her phone, and my down jacket is a constant companion—except for that day. “Normal” forgot to apply for that day. After all, it was just going to be a five-mile loop from the lodge. Super-easy with plenty of time to spend at the hot spring pool the rest of the afternoon. What could possibly go wrong?

That’s a great question. We had just arrived at the lodge after lunching in Stanley and, since it was a gorgeous August afternoon, we decided to go for a ride. We reviewed the trail options and picked the short loop, so we’d have plenty of time to relax before cocktail hour. We donned our helmets and headed out. The trail was smooth and the scenery beautiful, with expansive vistas of colorful hills and valleys. 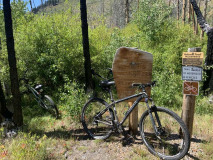 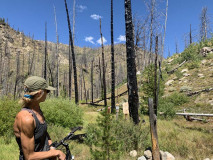 At the edge of the wilderness. Courtney Iventosch. 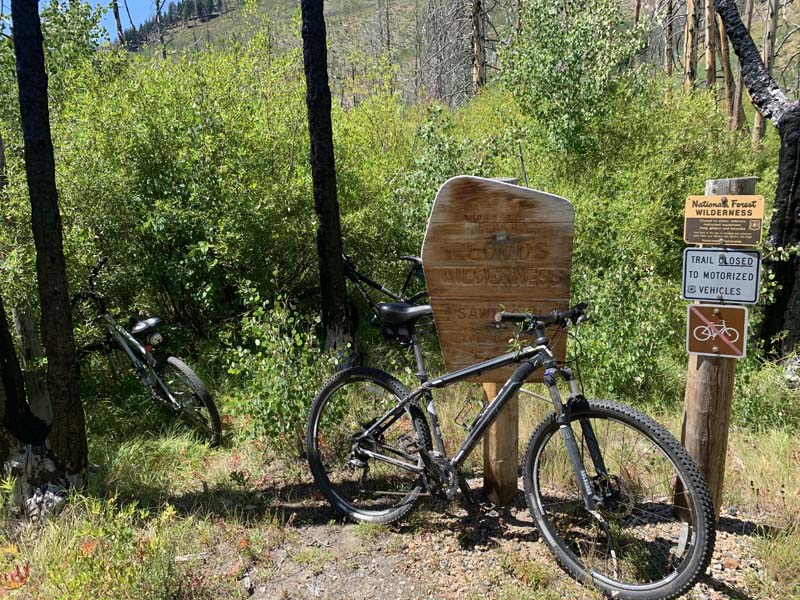 The family at the sign that prohibits cycling. Courtney Iventosh. 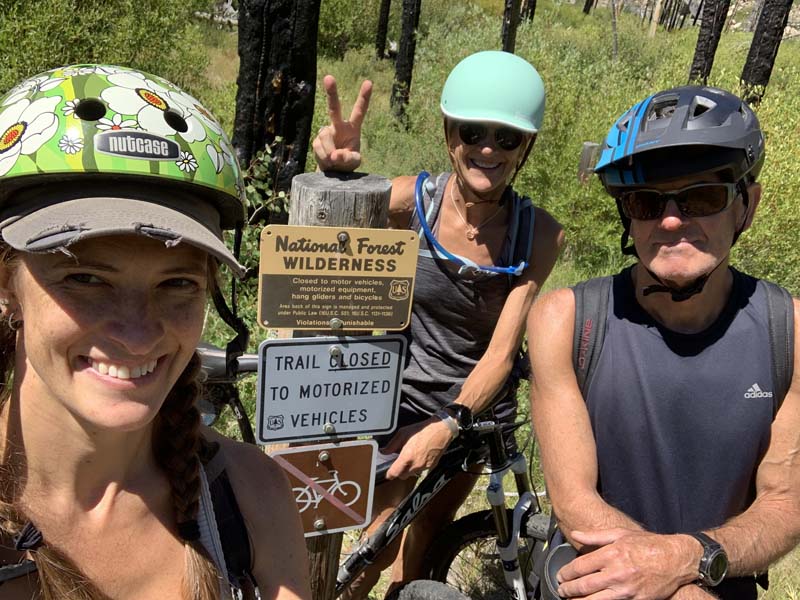 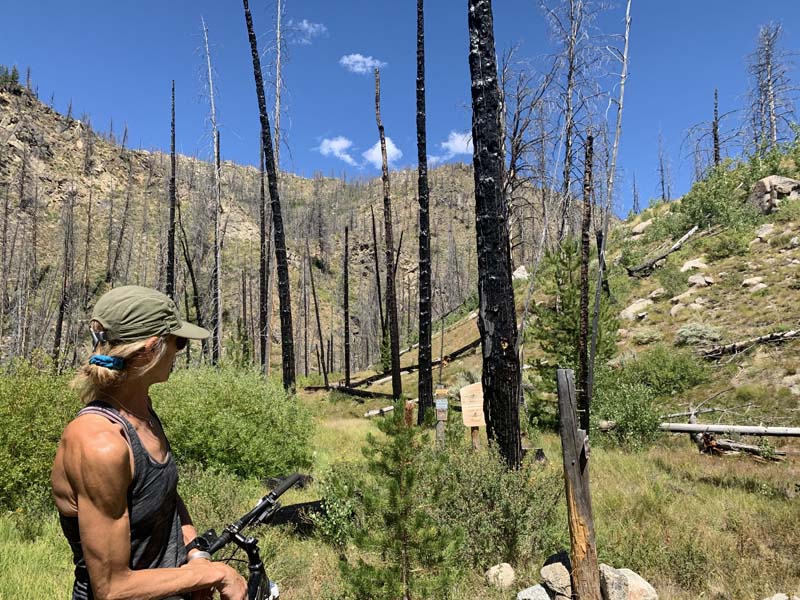 Suddenly, the trail narrowed into a single track and cows appeared out of nowhere—a contingent of cows running right down the middle of the trail. The more we shooed them away, the more they steamed full-speed ahead, never veering off course. It was annoyingly entertaining until … splat! I cringed as I rode my bike through a gigantic cow patty. When I hopped off my bike to check the damage, I stepped squarely into another. It was all over my pedals, the frame, my feet, and the back of my legs. Disgusting. I really don’t like cow habits at all, but they are something you learn to contend with in a free-range state like Idaho. They leave patty splatter everywhere and especially right on the road, where you drive or ride your bike. Ugh. Little did I know then just how giddy I’d be to slip in those very same cow patties just eight hours later.

Distracted by the cows, we somehow missed our turn and clocked in at six miles by the top of the summit. It didn’t occur to us at the time to turn back, because we simply thought the loop was slightly longer than indicated, so we pushed on, up and over the summit, still believing we were on track. It wasn’t until mile ten that we knew for certain something was wrong. We had missed a turn somewhere along the way.

My husband is a backcountry pilot and acutely aware of his surroundings. Plus he has an amazing sense of direction and has never failed in getting us back on track. So I had plenty of faith Iven said Highway 70 was just up ahead and he was pretty sure Robinson Bar was the direction we wanted to go. We forged ahead, but the highway was still nowhere to be seen. It wasn’t just up ahead, and it didn’t seem to be anywhere. Nevertheless, we were convinced we would eventually find it, since we were heading in the general direction and we really didn’t want to retreat only to ride back up the summit. But Courtney said, “Mama, I have a bad feeling about this.” With every futile sign we found, (two signs simply said “Trail,”) she was getting more nervous. She wanted to turn back after ten miles, but I kept telling her not to worry. “Daddy always knows where he’s going.”

Ever hopeful, we rode through five stream crossings between miles ten and fifteen, and hoisted our bikes over a mile of deadfall before reaching the edge of the wilderness, where we knew we couldn’t go on. Exasperated and lacking a better plan, we ditched the bikes and started the hike back—at a highly accelerated pace. We reached the summit by dark, but still had six miles to go, and it was getting darker and chillier by the minute. Iven had only a sleeveless top and walked the remaining miles with his arms tucked inside his shirt. This made balance tricky, especially on a rocky trail in the dark.

After two hours of inching along in the pitch black, barely able to make out the trail, and nearly stumbling into the abyss on several occasions, we reached the junction we’d missed earlier in the day. By then, we knew we would make it, but not before many turns and twists, and messy encounters with cow patties. (As you can imagine, they were impossible to dodge in the dark.) At midnight we could finally see lights in the distance and were we ever stoked! Mission accomplished. We arrived at the lodge and grabbed hot showers to warm our chilly bones. Then, with an unfashionably late dinner of beer and peanuts, we pulled out the map and began plotting a mission to recover our bikes, minus the thirty-mile “hike ’n bike” odyssey.

Iven triangulated the location on the map by coordinating our mileage and the wilderness boundaries.“I’ve got it. I’m pretty sure this is where they are, but we have to drive north about twenty-four miles and then hike in seven or eight, and I think we will find them.”

As I mentioned, he has a great sense of direction, but we were still exhausted and our tired legs had no desire to hike that many miles the next morning. So we decided to drive to the trailhead he had in mind, but only hike in a few miles to see if it was terrain our bikes could manage. We packed a lunch and hiked to a river crossing, but none of us felt like going on. Instead, we retreated after a lovely picnic by the river, and decided we’d give ourselves one more recovery day.

The following morning, we put our plan into action and once again drove twenty-four miles to the trailhead near Robinson Bar. This is a ranch along Warm Springs Creek that was once owned by Carole King. It has eight or ten cabins, a music studio, a primary home, a lodge, and two hot spring pools. Gorgeous.

But I digress. We set off on the hilly hike in search of our bikes. After six miles of pretty decent trail with  one large creek crossing, the trail narrowed into a harrowing, super-steep, rocky path up and down a huge rock outcropping. And that is just about where we entered the burned-out forest, completely covered in deadfall. “Not this again,” I sighed, as we endured the thought of carrying our bikes over downed trees again, if we even found our bikes at all. By our calculations, we should have been reaching our destination any minute, but the miles wore on. Just as we were thinking of raising the white flag, we saw the sign marking the wilderness boundary. This time, with a map in hand, Iven’s mapping skills were stellar. And our bikes were still there.

I probably don’t need to tell you the ride back was both difficult and exhilarating. After another eight miles of crazy cycling through the White Clouds Wilderness, we managed to reach the trail head and put an end to our saga. The moral of this story is: don’t head into the woods without your map, a wrap, your phone, and a snack. You never know what turns you might miss —even if you are an accomplished orienteerer. 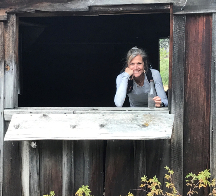 Suz Iventosch is a regularly featured food columnist and writes a food and travel blog with her daughter Courtney. Suz and her husband, Iven, who is a backcountry pilot, are outdoor adventurers and often fly into the Frank Church–River of No Return Wilderness from their summer home in McCall. They love traveling, cooking, hiking, cycling, fishing and whitewater rafting. For more information visit treksandbites.com
View all posts by Suz Iventosch →
ORDER BY MAIL