Valley of the Marten

The hair looked promising. In 2010, Scott Rulander and I were on the hunt for rare forest mammals and had spent most of the day skiing up to near the summit of Scotchman Peak to check a bait station in the West Cabinet Mountains. The hair sample we collected was long, dark, coarse, and we were sure it was wolverine. We labeled the sample “ScotchmanV12,” secured it in a pack, and after finishing our work we continued to the summit. This was everything I loved: science, skiing, winter, exercise. Every sample we collected filled me with anticipation of what we might learn and I felt alive as we dropped into the southeast face for the ski out.

A couple weeks previous to this, we had hauled a twenty-pound frozen beaver along the same route and fastened it to a tree. We had three targets: Canada lynx, wolverine, and the species of weasel called fisher. Fastening the beaver securely was critical, as wolverine are known to abscond with entire frozen beavers without staying to leave a hair sample. Once the bait was secured, we attached a ring of stiff-wired gun-cleaning brushes under it to snag hair from visiting mammals for DNA analysis. On a nearby tree we installed a remote camera to capture digital images of bait station visitors. Bait stations have been used for years in wildlife research but in 2010, DNA technology combined with new remote camera technology primed us to be one of the world’s first wildlife projects to deploy bait stations over a huge landscape.

The Scotchman station was one of the first in a massive two-country effort to run 734 bait stations across a thirty-three-thousand-square-mile landscape stretching from Idaho’s St. Joe River north to Golden, British Columbia. The logistics it took to pull this project off involved snowmobiles, helicopters, miles of backcountry skiing, intensive grant writing, and corridors of red tape, not to mention securing hundreds of freshly dead beavers. It also took a lot of boots on the ground. In addition to countless personnel from several organizations, more than two hundred volunteers from the Sandpoint area headed out to the mountains in the dead of winter to learn as much as we could about the mammals in our study area. When I looked at the pictures that went along with the hair sample Scott and I were so sure was wolverine, I was disappointed to see just another marten—the most common mammal we detected during the study. But the anticipation I felt every time we collected a sample arose again when we got the genetics results back from the lab, because the data on ScotchmanV12 were to form the centerpiece of the fascinating story our marten samples had to tell. 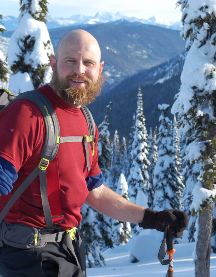 Michael Lucid has worked as a wildlife biologist in Idaho since 2000. He co-owns Selkirk Wildlife Science (selkirkwildlife.com) with his partner Lacy Robinson.
View all posts by Michael Lucid →
ORDER BY MAIL