Posted on by Flip Kleffner

And Other Angling Adventures

The author grew up in Boise, where his father, Sib Kleffner, owned a sporting goods store. At the University of Idaho, Flip became student body president and later was inducted into the school’s Hall of Fame as a football star. In 2018, he published a book about a lifetime of fishing exploits, Tales and Tails: A Story Runs Through It (design by Steeley Printing, Lewiston, production by Gray Dog Press, Spokane), which also includes stories by friends and family. Excerpts are reprinted here with permission.

In Lowman, when I was an early teenager, we stayed in a cabin north of the bridge over the south fork of the Payette River. One evening we were having hot dogs for dinner. My mom, known for subtle humor and jokes, put a fake rubber hot dog in my bun. One bite and I was the victim. I took it out and tossed it to my dog, Spike—thinking he would chew on it and be as surprised as I was. Then in one gulp, he swallowed the whole rubber hot dog—not one chew.

I panicked and knew he would die when the rubber wiener clogged up his whole system. My mother shared my fright. She knew if we could make him throw up, he would be saved. How to do that? Mom headed across the road to the bar and bought two longneck bottles of beer. Now how to make him drink the beer? We shoved the long neck down his throat and emptied the bottle, then waited for the rubber weenie to show up. We only got a quizzical look on Spike’s face. OK—here’s the second bottle down his throat. Waiting. No weenie, but finally a nice burp. Spike wobbled to the rug, collapsed and was drunker than a skunk. He went blissfully to sleep. We convinced ourselves Spike was fine.

He lived to see the next day—somewhat hung over—and gave us the stink eye when he awoke.

One time brother Bob was stung by a wasp who had gotten into his bottle of Coke and his lip swelled up like a balloon. We were fishing at Hardscrabble on the Middle Fork of the Payette River . . . and just kept fishing. It happens to everyone at least once.

Another time we were fishing at Arrowrock Dam, where the Boise River first hits the dam’s backwater. It was later in the afternoon and brother Bob and I had lost interest in fishing. Dad was teasing some trout, but not catching any. Finally, after a dozen “just one more cast” comments from Dad, Bob lit and threw a cherry bomb in the hole. Then in about five seconds, we heard a “whomp” like a submarine detonator had exploded. We hopped into the car, headed for home. Alas for Dad—no more “just one more cast” moments that day. 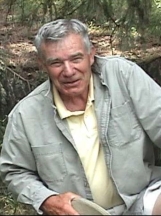 Flip Kleffner grew up in Boise and moved to Moscow in 1980 to be the University of Idaho Director of Alumni Relations. He has been a professional baseball player, an athletics supplies store owner, on the Boise City Council, Ada County Commission chairman, and a school photography business owner. Now retired in Moscow, he volunteers, paints, watercolors, golfs, and fishes. Flip treasures his sixty-four-year love affair and friendship with wife Jo. They have raised six children.
View all posts by Flip Kleffner →
ORDER BY MAIL