Posted on by Dale M. Gray

A Place with a Very Good Secret

“Who would ever want to live in Grand View?” I remember having this uncharitable thought the first time I saw the town. It was 1976 and I was a senior at Oregon’s Vale High School, on my way home from a science club field trip to the Bruneau Sand Dunes and the Bruneau Canyon overlook. We stopped at the gas station on top of a low hill above Grand View and as I gazed at the town and the giant feedlot beyond the Snake River, I thought it looked like a hard place to live.

My next introduction to Grand View came years later, when I was director of a museum in Murphy. My wife Tammy had obtained a job teaching at Grand View Elementary and we found a nice little house in the community of Oreana, about halfway between Murphy and Grand View. I accompanied Tammy to various school functions and found that my earlier assessment was unkind. Grand View was populated by some of the nicest people I had ever met. They were all hardworking, valued friendship, and whenever they could, they took time to help neighbors. When money got short for us one spring, somehow word spread, and food magically began to appear on our doorstep. People would drop by with a pie, telling us they were trying a new recipe and asking us to do them a favor and test it. Food served with dignity.

If you have never been to Grand View, don’t feel bad. It is not on the main road to anywhere. Located only fifty minutes south of Boise, it is one of Idaho’s secret places. Set on the south bank of the Snake River southwest of the Mountain Home Air Force Base and opposite one of the world’s largest feedlots, it is also just downstream from the amazing C. J. Strike Dam that provides power to the Treasure Valley. To the south is desert, and lots of it. If you go exploring on Mud Flat Road south of Grand View, you’d better stop at the main intersection to fill up your gas tank. In the Owyhee outback, there are no services, period. It is truly wild out there.

Passing through Grand View Valley is an experience marked by time. The Bonneville Flood cascaded through here about 14,500 years ago, eroding giant plunge pits at the base of cliffs and perhaps sweeping away mammoths grazing in the valley. Bones of these giant creatures have been uncovered downstream at Big Foot Bar. Later, humans passed through the valley, stopping to fish and enjoy the mild climate. In 1826, mountain man Peter Skene Ogden trapped along the Snake and Bruneau Rivers. Then came travelers on the Oregon Trail. The “South Alternate” route of the trail passed right through the site of the future town. Although thousands passed through here from the 1840s through 1860s, there was no reason to stop. Most of the travelers complained of lack of water, excessive trail dust, and occasional trouble with Indians. The South Alternate is a polite modern term— when it was in use, it was called the “dry route.” The exception was a point where the trail touched the river, where man and livestock could drink. The town of Grand View stands at this very point. 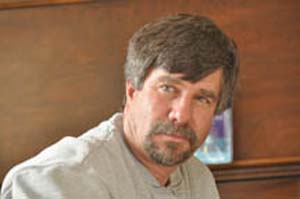 Dale M. Gray lives outside Grand View, where he works three jobs. He runs a small cultural resource company, does archaeology for a Nevada firm, and drives a pilot car for oversized loads. His wife Tammy runs the Eastern Owyhee County Library. Their two children graduated from Rimrock High School.
View all posts by Dale M. Gray →
ORDER BY MAIL