The Allure of Murals

Story and Photos by Drew Wahlin

In my decades of traveling through Idaho’s string of rural communities bordering the Snake River, I’ve always taken close notice of murals, because they constitute a canvas of residents’ lives.

Just like the Burma Shave signs along the old highways years ago, these paintings carry personal messages. Communities take great pride in them, placing them like flags in the centers of towns for all passersby to see. To me, these ephemeral forms of art are similar to those of the First Nation peoples, whose pictographs are etched on Idaho’s canyon walls and along the long ribbon of a river called the Snake. Because town murals represent life at the time they were made, I was led to wonder about the history of communities that have them, why the paintings were created, and by whom. I investigated a half-dozen of these treasures, almost hidden within the natural resources and beauty of southwestern Idaho’s rural communities. Representing just the tip of a magical kingdom, they’re a teaser of what awaits anyone who travels through such communities, which were settled in the nineteenth century by pioneers traveling the Oregon Trail. Like the wooden canvases on which most of these murals have been placed, the paintings themselves will eventually weather into shadows. The murals and the artists who placed them will be gone, which is why I think their stories should be told.

In 1901, investor Frank Buhl traveled west from Sharon, Pennsylvania, to investigate a proposed irrigation development in southern Idaho called the Twin Falls South Side Project. Frank and another investor formed a company that provided large-scale irrigation to the surrounding Magic Valley, creating the impetus for founding the town of Buhl in 1906. Situated along scenic Highway 30 in southern Idaho, Buhl now bills itself as the “Trout Capital of the World,” because of the area’s highly productive fish hatcheries.

The “Trout Metal Wall Art Mural” was created in 2005 through the combined efforts of University of Idaho students, professors, and an alumnus. The forty-by-sixty-foot work is on the side of the Buhl Hotel, the first building erected downtown, in what is now the community’s Legacy Corner, which pays homage to the trout industry. The mural’s design, by art graduate student Cindy Darnell, was chosen from among sixteen proposals as a cornerstone of Buhl’s 2006 Centennial celebration.  But it encountered many outdoor challenges, including the attraction of pigeons to the twenty-five-foot-long aluminum trout. In 2010, city officials decided the mural needed a facelift, which was performed by Mountain Home muralist Randy Miller, who created a new wall graphic design while retaining the original trout metalwork. 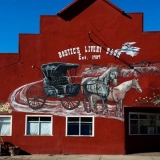 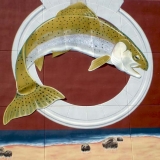 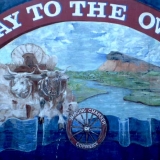 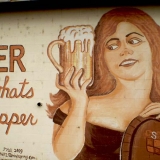 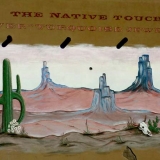 The livery at Glenns Ferry.

Metal trout wall art on the side of the Buhl Hotel. 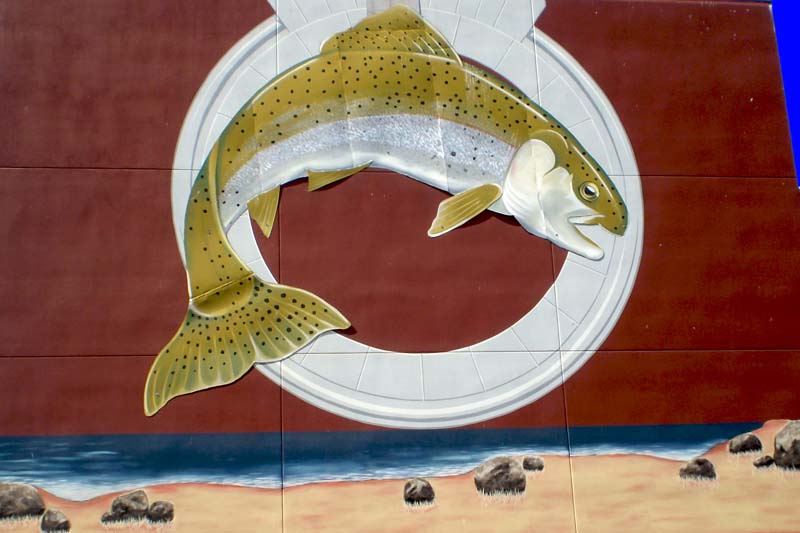 This mural has become a calling card for Marsing.

The “Beer Girl” mural in Hammett. 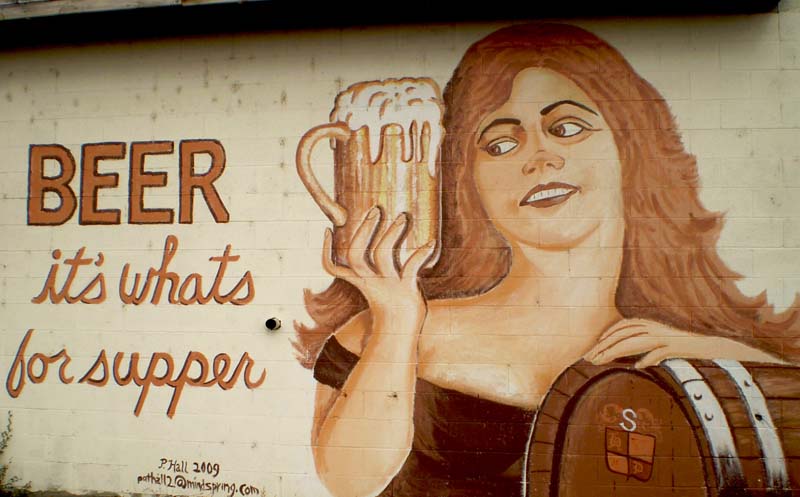 This mural in Wilder depicts the Southwest, from where the business owner says her customers come. 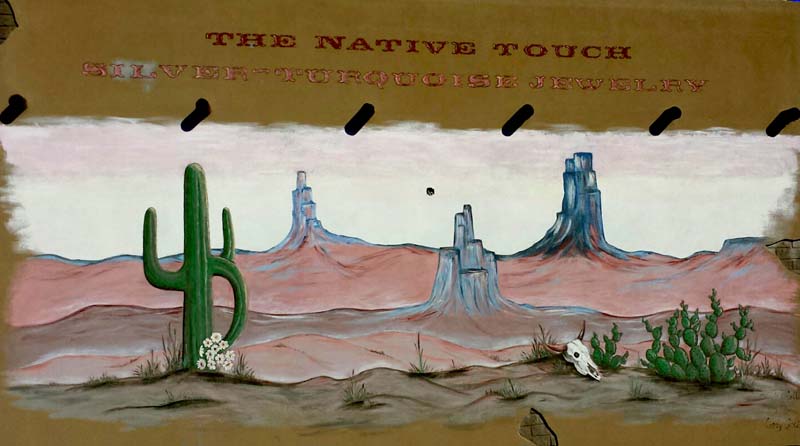 This former railroad community along I- 84 is now a destination for weekend motorcyclists and tourists. Gustavus P. Glenn, for whom the town is named, knew an opportunity when he saw one. He was a freight hauler whose teams of oxen and horses moved goods along the Kelton-to-Boise section of the Oregon Trail in the mid 1800s. Gus’s huge freight wagons were pulled in long trains, with as many as twenty oxen per wagon.                   The downtown of Glenns Ferry boasts many pioneer dwellings as well as several works by muralist Susan Helton. For example, her 2008 “Bostic’s Livery Barn” is on Main Street downtown, and her “Glenns Ferry, A Hometown Community Where the Past Meets the Future,” graces a large tank on Commercial Street to the south, heading toward Three Island State Park. Susan once said of her work, “I go to small communities and usually charge two thousand dollars for a mural, but I say if they don’t have the money, they can pay me in potatoes, chickens, corn, carrots. One dairy in Buhl last summer gave me two thousand dollars in ice cream.”

Pat Hall’s “Beer Girl” mural is located in the heart of sheep and cattle country on Highway 78, just off US I-84 about seventy miles west of Boise. During a recent visit with the Hammett artist, she told me of her late entry into the art world. “I had tried painting with oils in about 1994 and I thought I was good and painted a few canvases. But I really got serious about my art after I helped paint a mural in Vale, Oregon, in 2010.”

Hammett is located where US Highway 30 descends from the desert of the Snake River Plain to the irrigated farmland along the canyon’s bottom. Now that most people whiz by on the freeway, Hammett is a lot quieter than it used to be. Today it’s a spread-out community of ranches and large, modern homes along country roads of the valley, which is enclosed on both sides of the Snake River by steep hills that climb to plateaus a few hundred feet high. Viewed from below, the tops of the hills are rimmed by a line of lava rocks protruding above the light-colored dirt in the valley’s floor. The surrounding area is arid desert where farming was made possible with irrigation from the Snake River—and where a cold beer is no doubt welcomed by many after a hard day’s work.

Marsing artist Adriane Headley painted the “Gateway to the Owyhees” mural in the early 1990s, and it became the city’s trademark, found even on Marsing’s website home page. The town, situated alongside Highway 55 on the northern edge of the Owyhee Mountains, is bordered on the north by the scenic Snake River. The area is surrounded by beautiful views, wine country, and expansive outdoor recreation. In 1863, Owyhee became the first county created by the newly-formed Idaho territorial legislature. It remains the largest Idaho county in land area. The “Gateway” mural can be found on the east side of a building on Main Street (Highway 55) downtown.

Sculptor and painter Don Collins went to grade school in Glenns Ferry and finished high school in Mountain Home before heading off to college and an art teaching career in Nevada. He moved to Bruneau in 1991, but his wife’s family, the Turners, were among the valley’s earliest settlers. Bruneau is an oasis in the Owyhee Desert. The Bruneau River waters native and irrigated vegetation of the valley floor and then flows into the C.J. Strike Reservoir, not far to the west. The town was built at the edge of the valley, next to hills where the native white earth shows through sparse vegetation. The valley’s biggest population is of cattle, which far outnumber the couple hundred humans.

Don’s mural “Graphic of Snake River Plain,” found on the east side of the town’s convenience store, applauds the Bruneau Valley’s history of cowboys, cowgirls, and Mexican vaqueros (who drove cattle in the late 1800s from Mexico into the Bruneau Valley), by linking them to present day superheroes, represented in the painting by Spiderman.

A small farming town between the Boise and Snake Rivers in the western part of Canyon County thirty miles west of Boise, Wilder was first homesteaded in 1904, when settlers anticipated that irrigation water would be provided by the development of the Boise Project. A barren tract of sagebrush land eventually was converted into one of the most fertile agricultural regions in the nation. Some of the world’s best onions can be found in Wilder, home to former Idaho governor and onion farmer Phil Batt.

Surprisingly, rather than depicting the Wilder landscape prior to irrigation, the “Native Touch Mural” in the center of town is a homage to the southwestern deserts of New Mexico and Arizona.  That’s because it’s on the side of a building that sells southwestern Indian jewelry. When I asked owner Elaine Bernett, seventy-seven, why she started such a business in Wilder, she responded, “Because my customers travel Highway 95 from Mexico to Canada.”

The mural was created by Idaho artist Sandra Collard, who told me she “grew up painting” and always had an interest in murals. For twenty-two years, she worked as a ceramicist in Wilder, painting pieces and giving art lessons. Her major media are western-themed oil and watercolors. This was her first mural, which Sandra said was “a family effort that included my daughter.” The mid-summer temperatures that year were so high that a plastic canopy had to be erected to do the job. 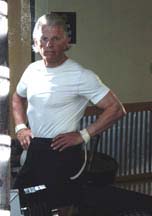 Drew Wahlin is a writer, outdoor photojournalist, and extreme outdoorsman. He has written for various outdoor magazines, wrote a weekly business column for the Idaho Statesman for several years, and was a contributing writer to Venture Magazine. Drew received his undergraduate degree from the University of California and M.B.A. from the University of Puget Sound. He lives in Meridian. You can write to him at drewwahlin@msn.com
View all posts by Drew Wahlin →
ORDER BY MAIL