Posted on by Toinette Dickey

But Worth the Trouble

In the spring of 1983, on a promising day for crops to come, my husband Alton Browne disked the field just west of the house beyond the irrigation ditch at our farm on the Emmett bench.

I brought him fresh lemonade, and we sat by the ditch watching a new black Lab pup that Alton had purchased as a companion to our dog Brownie, who we had decided might make a good farm dog after all, even with his dubious ancestry of half-coyote, half-Australian shepherd. Brownie had earned our trust the previous winter, by befriending calves that had been born to range cattle grazing on our farm.

Brownie and the pup crawled under the disk, out of sight, for a nap in the cool soil. Our drinks finished, Alton returned to the tractor and started it, pulling away while watching (with his usual grin of enjoyment), the burst of black diesel smoke that billowed from the tractor’s smoke stack. That was when I heard the cries of the dogs. 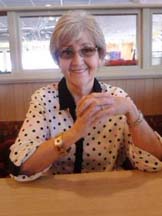 Toinette Dickey grew up in Boise and Lowman. She attended San Bernardino Valley College in California, where she became a protégé of playwright Esther B. Glaser. Toinette is currently writing a historical fiction book about an Idaho family’s wilderness experiences. She and her husband Steve live in Nampa. They have nine children and twenty grandchildren.
View all posts by Toinette Dickey →