Posted on by Pat Drain

A Tradition of Decades

From the late-1930s into the early-1960s, three Gooding families made regular hunting excursions, often together, into the mountains around the Selway River. In 1964, this region became part of the Selway-Bitterroot Wilderness. The Browns, Savages, and Tates had migrated to Idaho from Tennessee. The men in these families made up the majority of the fall hunting parties. In the summer of 1949, the entire Brown family camped for a week at Paradise Campground, so the men could show everyone their base camp before they packed up to Bad Luck Mountain each fall. I went on that 1949 summer trip with the rest of the Brown family: Wesley and Ruby, Herb and Ileta, Percy and Mabel, Lek and Mary, as well as grandparents Vance and Bessie. Recently, I gathered tales from the hunters. Following are several of them.

There are so many stories! I’ve grown up listening to them over the years.

One of my favorite stories has Sonny “Son” Savage at the center of it. Apparently, Son was a bit jumpy, and he was scared to death of snakes. During the long drive up to base camp and then the ride from base camp up to the hunting camp, he made the mistake of mentioning he was sure glad they were going up into the mountains when it was cold and snowy, as he didn’t have to worry about no damn snakes. One of the group told Son he couldn’t be too lax, as there were still snow snakes.

After many hours of cajoling, the others had Son convinced there was a breed of rattlesnake that changed color in the winter, just as snow rabbits turn white for camouﬂage. The snakes couldn’t survive hibernating through the long winters in these extreme climates, so they had to adapt, and that’s how snow snakes came to be. They said he shouldn’t worry, because snow snakes almost never hurt anyone too bad—you just had to be careful when you got up in the morning to check that none had crawled into or under your bedding to ﬁnd warmth. If you were to wake them up suddenly, they’d be a bit grouchy and might bite you out of spite.

You can imagine the continued build-up. So the guys progressed on to the campsite and raised the sleeping tent and the cook tent, and did everything else you do to prepare camp like chopping wood, setting up an outhouse, etc. During all this, someone coiled up a rope and placed it under Son’s bedding in the sleeping tent. 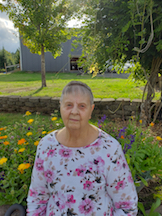 Pat Drain was born and raised in Gooding. Her father was a farmer for many years, and then went into carpentry. In Pat’s younger years, the family spent a lot of time camping up Trail Creek above Sun Valley, and also around Stanley, and often went swimming at Banbury Hot Springs.  She now lives in Lebanon, Oregon.
View all posts by Pat Drain →
ORDER BY MAIL