Posted on by Michael K. Edwards

And Willing to Admit It

When I was in grade school in Hansen, growing up in Idaho was never a big deal for the obvious reason that just about all of my fellow students were more or less in the same boat. Only when I left the state and people found out where I was from did I begin to realize how different life was in Idaho from more populous parts of the country. For instance, I found out from East Coasters that in the West, once in a while Indians still attacked. And if not Indians, there was always the threat of bears, wolves, and the occasional Bigfoot to worry about.  Did I wear a six gun? (Actually, I did once, but that’s another story.) Did I ride a horse? (Actually, I did that too, but that’s also another story.) Once, when I was asked if I had seen Bigfoot, I replied, “Only one time: in Walmart.”

I grew up believing what I was told in grade school, that the name “Idaho” came from a Shoshone word meaning “sun coming over the mountain.” It wasn’t until Wikipedia that I learned the harsh “truth” (assuming, as I did, that everything on the Internet is true). It said the name was probably made up by “eccentric lobbyist George M. Willing.” It also said the name may have come from a Plains Apache word for “enemy.” Not long ago, IDAHO magazine ran a story that suggested the state could have been named by Luzena B. Wallace, whose husband, William H. Wallace, was Idaho Territory’s first governor (“She Named Idaho,” September 2018). She claimed to have named it after a niece, who in turn was named after the daughter of a chief. I vividly remember the sun coming over the mountains many a time in the morning when I was younger (had to get the irrigating done early). I don’t remember any Apache giving me the evil eye and threatening me with an arrow through the heart (which isn’t surprising, since there were no Apaches in Idaho). So, being somewhat of a romantic, I hold on to the belief that my history book was right. 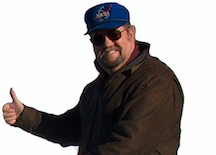 Michael K. Edwards grew up on farmland in the Magic Valley. He earned a degree in biology from Idaho State University and did research on potato variety development in Aberdeen before moving to a position in factory automation with Lamb-Weston. In 1992, Michael’s wife, three children, and he moved to Kennewick, Washington. In 2010, he and his wife retired and moved to Meridian, where they currently reside.
View all posts by Michael K. Edwards →
ORDER BY MAIL