Posted on by Bob Boyles

The Peak That Got Away

Story and Photos by Bob Boyles

Lady and I had gotten along just fine for about half of the five-day horseback trip up the South Fork of the Payette River, until she bolted off the trail into lodgepole pines. She was at full gallop and I had to lie flat on the saddle to keep from getting knocked off by low-lying tree limbs. After I finally managed to stop her and we trotted back up to the trail, the outfitters quickly found the cause of her behavior. A yellow jacket had burrowed under her saddle blanket and she was getting stung repeatedly. Other than this incident, Lady and I became good friends, and she impressed me with her calm demeanor and backcountry skills. I had ridden a few times in my youth but had never spent a full eight hours on the back of a horse, so I was in for a surprise after dismounting at the end of a long day. It took me a full day to walk normally again and by then, I had nothing but respect for those who make a living on horseback.

This was September 1973, and I had been invited on the trip by the Carson family. When the outfitter assigned the horses that we would ride based on our experience and the personalities of the animals, he told me, “You’ll ride Lady. She’s a little feisty but she’s a good, sure-footed horse.” We started from the stables at Grandjean, from where we would ride a loop around Virginia, Edna, and Vernon Lakes in the Tenlake Basin before reaching base camp at Ardeth Lake.

Our trip was one year after I had started rock climbing, and because we had pack mules to haul our loads on this trip, I had decided to take my rock gear along. I also kept an eye out for opportunities for future trips and wasn’t disappointed once we passed Fern Falls on the South Fork of the Payette River.  As we rode farther up the trail, I gawked at the granite formations on the east side of the valley and thought, “Wow.” One formation in particular stood out. I shot photos and vowed to come back to it with my rock-climbing buddies. The first name for it that occurred to me was King Kong, which stuck, although we later shortened it to Kong. 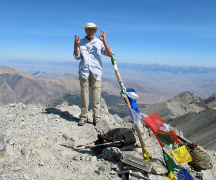 Bob Boyles is a retired senior technical analyst who has spent most of his life hiking, climbing, skiing, and exploring the mountains of Idaho, the western US, and Canada. Bob started hiking the foothills around Boise in grade school, took up technical climbing in 1972, and continues to explore new places in Idaho to this day.
View all posts by Bob Boyles →
ORDER BY MAIL