Love on the Rocks

The Romance of Climbing

Story and Photos by Cristen Iris

Jim Edgemon and I met early in the year of 2011. After chatting for months about our various outdoor interests, he asked me out on a date. He proposed a hike to, and a climb up, Stack Rock, near the Bogus Basin Mountain Recreation Area. We had talked about it many times and I was excited to go, having never done anything like that before. Our date started at the trailhead near mile marker thirteen on Bogus Basin Road.

The June sky was bright and cheerful, all the vegetation was fresh-faced and wearing new leaves, as if to impress. The warm air was alive with the sounds and smells of new life. The atmosphere encouraged us to go farther and seemed to diminish the effort required to get up steeper sections of the trail.

“We’re almost there,” Jim told me as we crested the top of a little hill and followed the trail to the right. And there it was, just beyond a swath of ceanothus. That’s no big deal, I thought.

It wasn’t a big deal. But it wasn’t Stack Rock.

As we rounded that particular stack of rocks, the structure appeared that is nicknamed Freddy’s Stack Rock. Now that was a big deal. Especially at an elevation of almost six thousand feet. This was the first time on our date when I felt nervous. I became self-conscious and insecure. I’d climbed at the Black Cliffs near Lucky Peak Reservoir once with my brother, but that was many years earlier, and we had been fully roped, harnessed, and chalked. I wasn’t sure if my bravery would rally for this adventure.

But like the trees, I was eager to impress, in my own way. I put on a fresh face and let the mood of a first date inspire me as we began our ascent. 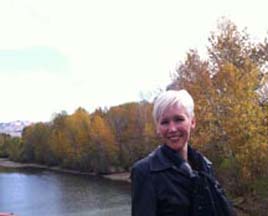 Cristen Iris, a.k.a. Iris Draak, is a lover of all things out of doors and applies her experiences there to business and personal development. Moving and traveling for much of her life, Cristen now lives in Boise with her husband. Together they explore Idaho and the Pacific Northwest. You can find more of her work at irisdraak.com.
View all posts by Cristen Iris →
ORDER BY MAIL