Posted on by Marylyn Cork

Spring has come to Missouri Ridge, that low rampart of humpbacked granite knobs running westerly down Dufort Road in North Idaho’s Bonner County. My father, who owned part of it, always called it a spur of the Selkirk Mountain Range.The ghosts of Handsome and Cloudy West ride there.The time is the late 1940s. Roundup has come to the Rocking R Ranch. Its cowhands are pursuing ghostly cattle up, down, and around the ridge’s boulder-strewn slopes and brush-choked, shallow ravines. Calves bawl, cowboys whoop. Agile cutting horses spin and turn with the lightning-quick lunges of the resisting bovines, thwarting their determined attempts to escape. Spinning lariats flash in the sun, and the acrid smell of singed hair permeates the air as hot branding irons stamp the ranch brand into tough cowhide . . .

Memories coalesce and take shape in my mind, like objects forming in the ephemera of mist that rises from the Pend Oreille River on early fall mornings. Indian skirmishes, rustlers beaten back. Five little girls roaming the ridge like vagabonds, letting their imaginations run free. Sleeping out with nothing to fear, growing up in a simpler time. That was life on the Rocking R.

Looking back, I can’t put my finger on how the fantasy of the West brothers and the Rocking R Ranch came about, or exactly when it began to evolve. It was fully developed by the time my best friend Babe and I had reached our eleventh year.The two of us were cowboy fanatics, inspired by our prodigious reading of Zane Grey novels, comic books, and Big Little Books featuring our heroes. Roy Rogers was our supreme idol, but we also admired Gene Autry,The Lone Ranger and Tonto, Hopalong Cassidy, and Red Ryder. Concealing them at school between the pages of our textbooks, because our teachers did not approve, we also devoured Ranch Romance magazines, and nagged my father until he (usually) gave in and hauled us into Sandpoint to see the latest cowboy movie at the Panida Theater.Out of such, in our imaginations, we transformed ourselves into cowboy brothers, and our environment into a ten thousand-acre ranch running whiteface Hereford cattle and Palomino horses (think Trigger).We brought our little sisters into the make-believe. Cowboys, after all, have sidekicks.

On the ridge, Babe was transformed into a laughing, carefree cowpuncher named Handsome West, who co-owned the Rocking R with his moody brother Cloudy–the role I portrayed.Handsome had a pretty Mexican wife, Rosa–my sister Rachel–while Cloudy’s wife was Rosa’s equally pretty sister Rozalita–Babe’s sister Patsy. My sister Janice, the youngest member of our quintet, filled the role of Shorty, our ranch foreman.

Our first order of business was to build a ranch house. Fortunately,Dad and my maternal grandfather owned and operated a small sawmill at the foot of the ridge, so there were plenty of slabs and other scrap lumber at our disposal.We purloined nails and tools from my paternal grandfather, without his knowledge or permission. Like pack mules, we lugged the whole conglomeration to a spot between the first and second hump of the ridge, at its base, so as to make transporting those boards as labor-free as possible.We hacked down small trees to use as framework for the house, nailing the poles to four conveniently spaced larger trees to enclose a space roughly ten feet by eight. Boards nailed to the poles a foot or so above the ground made the floor. Originally intending to construct a roof overhead, we nailed a framework of poles to the trees as well, as high up as we could reach.Tiring of the labor involved, we dispensed with the ceiling, however, after the floor was down, opting instead to spread our sleeping bags and blankets on the rough, hard boards of the floor and gaze at the stars.We told ourselves we were comfortable.

Meals were prepared on a campfire in a ring of rocks in front of the “ranchhouse.”We fried meat and potatoes in one of Mom’s cast-iron skillets and boiled coffee in a can, toasting the rare wiener or marshmallow on the side.Until we got caught,Handsome and I occasionally relaxed after supper with a cigarette snitched from Dad’s stock back at home. Life on the Rocking R quickly came to seem more real to us than the mundane existence of our everyday lives. 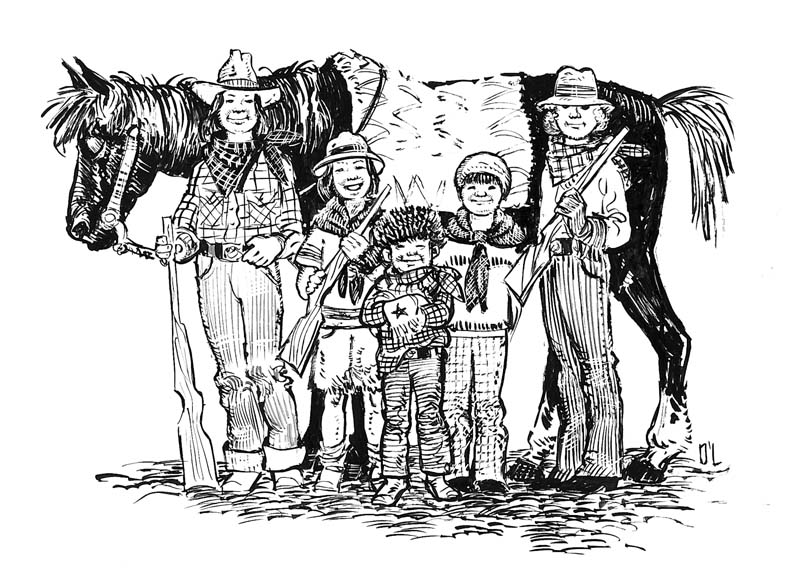 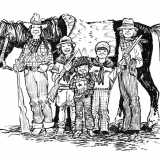 Oh, the adventures the five of us had! We roamed on foot or on horseback, pretending that the reluctant saddle nags and gentle draft animals under us were the golden Palominos of our dreams.When we weren’t fighting off “bad guys,” as we brandished Granddad’s treasured homemade wooden rifles as weapons, we explored, gorged on serviceberries in season, gathered the wildflowers that bloomed in profusion on the ridge. Often we “nooned” at the remains of an old homesteader cabin in a grassy meadow where purple irises and lilacs still flowered. A relic of the early 20th Century, the structure was even then slowly sinking into oblivion close to a little spring where we savored clear, cold drinking water.Water was in short supply on the ridge.

Not all of our adventures were imaginary, either.One occurred when my Uncle Chuck from Montana brought his family to visit. The family consisted of his son “Little Chuck,”my age, and the wife Big Chuck had married after the death of my Aunt Jessie; plus the new wife’s daughter, a spoiled brat named Karen.The step-siblings were mortal enemies, an antipathy that never died. Karen wanted to go with us that day, and there was no preventing it.We had to take her to “climb the rocks” high on the ridge. While scaling a cliff she slipped at the top of a sheer granite chute and

began to schuss toward the bottom, screeching like a cat in pain. Reaching out an arm, I grabbed her coattails as she shot by, and managed to hold on–fortunately, she was as scrawny as a half-starved kitten. If I’d dropped her, she could have broken her head, or maybe an arm, and I expect that Charles wished many times that she had.

I even underwent an epiphany of sorts on the ridge. Perhaps it was a sort of metaphor for coming of age. I was in the seventh grade the autumn the county nurse came out from Sandpoint to the little two-room grade school I attended. She checked our eyesight and sent Mom a note recommending a visit for me to an eye doctor as soon as possible. I needed glasses! The diagnosis hit me like a blow to the heart and I wept for a week or more, convinced I was disgraced for life.The moment the optometrist slipped the dreaded “specs” on, however, I was thunderstruck. Objects not directly in front of my nose came clear for the first time in memory! I raced for the top of the knob directly behind our house.There, spread out before me, far below and in the distance, clearly delineated for the first time, was a world I hadn’t known existed.To the south, Cocolalla Lake shone serenely blue in the sun. So did Little Coke, now Round Lake, in a westerly direction, almost obscured by trees. Sandpoint and the Long Bridge lay behind me, to the north.Not even the bright sun glinting off the water could cause my eyes to tear and the sights I was seeing to blur. I never mourned another day about having to wear those glasses.To this day, my “specs” are the first things I put on in the morning and the last I take off at night.

Today, the world of my childhood is gone.Missouri Ridge has been transformed, and not for the better, in my opinion. Houses peek from places where once the cows of the Rocking R roamed free. Fences enclose some of the parcels that former farms have been subdivided into.“No trespassing” signs make it hard to revisit some of the old haunts.The ridge has been many times logged, and now is being mined for granite rock for road building and landscaping purposes. To my knowledge, no children play there anymore–not since the advent of television and two cars in every garage.Where my sisters and I, and our contemporaries, were lucky to be transported to Cocolalla Lake even once a week to go swimming, now kids have many avenues of recreation and entertainment open to them and the means to access them.

Unlike the fast-paced summers of today, when I was a child our hiatuses from school passed slowly, too slowly sometimes. They positively dragged as the days wound down, and by the time school bells rang in the fall, most of us were eager to return to our little two-room country school and the opportunity to re-acquaint ourselves with the friends we hadn’t had contact with all summer. The only constant in life is change, and childhood has changed a lot in a few short generations–and not for the better, I sometimes think. I mourn the lost innocence of yesteryear and the childhood I was privileged to enjoy growing up on Missouri Ridge. Long live the Rocking R!

Marylyn Cork has lived in Priest River more than fifty years and in Bonner County more than sixty years. Writing since she was nine years old, she retired as editor of the Priest River Times in 2001. She enjoys reading, gardening, hiking, camping, and traveling.
View all posts by Marylyn Cork →
ORDER BY MAIL