Posted on January 1, 2017 by Jesse Warburton aka Brother Music

Talk about a Close Shave

By Jesse Warburton, aka Brother Music

In northern Idaho, deer, geese, ducks and other wildlife can be observed almost everywhere—in the parks, paddling about in ditches next to the road, crossing streets, eating fruit from a neighbor’s tree, or just lying down to relax in someone’s yard.

So I was not surprised when I went out of my Sandpoint apartment in February 2015 and saw a young moose feeding on my neighbor’s bare rose branches about twenty feet away. It was cold but there was no snow on the ground. I slipped quietly back into my apartment to get a coat, having decided that this moose seemed friendly enough that I might watch her for a while from such a short distance. (I’ll refer to this moose as a “she,” although I’m not certain if it was a female or a young male.) These close encounters always remind me that as a young boy I had dreamed of being a National Geographic photographer. It’s exciting to be close to wildlife, even without a camera. 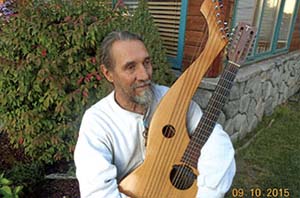 About Jesse Warburton aka Brother Music

Jesse Warburton, aka Brother Music, is a longtime blues singer turned gospel singer who was strongly influenced by the West Coast scene of the 1960s, opening for many rhythm and blues acts up to the 1990s. Jesse has written songs for years, keeps a journal, and recently turned to writing stories, in exploring another poetic side of himself.
View all posts by Jesse Warburton aka Brother Music →
ORDER BY MAIL