Posted on by Suzanne Locklear

Warmth in a Cold Time

I was sipping on a latte´, lost in worry, when I first met Sheri. She stepped into the coffee shop for a gingerbread latte´ to soothe her spirits. She plopped down beside me while her drink was being prepared and began to chat as if we were the best of friends.

It was a disheartening time for everyone. Most of us were still reeling from the sorrow of the 911 attacks, and now its financial impact was trickling down. Gas prices increased, small businesses without a backup budget were hit hard, and even big companies were slashing budgets, cutting orders, and doing away with Christmas parties.

Sheri had just taken over running a quaint Christmas season store she had inherited, but it was clear she was not beyond the pain of her mother’s passing. She was new at the retail game but was an impetuous character with bold plans to ramp up sales for her extra stock of miniature Christmas village houses, trinkets, and falderol. She rented the building next to her store for extra space, but then was dismayed when she calculated the cost of staffing it. She set up her displays artfully, but the lighted miniature villages filled only a quarter of the building. The empty portion was a colorless, mammoth box with no magic of any sort. Sherri felt she had made a gob-smackingly huge mistake. 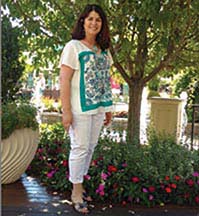 Suzanne Locklear moved to Boise 1981 to raise her children in a safe and beautiful area. She enjoys cooking, traveling, writing, and spending time with her friends and family. Suzanne sells RVs for Nelson’s RVs and enjoys exploring Idaho. She collects dolls and “far too many books.”
View all posts by Suzanne Locklear →