What Few Have Seen

Posted on by Sheila Petticord

In the spring of 1990, I was newly divorced, searching for a fresh direction in life and taking art classes at the University of Idaho in Moscow. I had always been considered the artist of the family, but a basic drawing class had me feeling stuck. I remember an especially exasperating exercise in which I was paired with another student and, with little instruction, told to render an image of her. I had no idea how to begin, and felt paralyzed by the thought that my drawing would do nothing but insult her.

I suppose I was ready for an epiphany when, several days later, I saw a painting of a friend that absolutely captured her essence in just a few inspired strokes. I was in the nearby town of Genesee, visiting Ellen Vieth at her flower shop. Behind Ellen, next to the cash register, hung a seemingly dashed-off painting, a mere sketch of her. Who did this? Ellen told me the artist’s name was Sara Joyce. I will always remember this first impression of Sara’s work, because it’s been reinforced so many times since then, especially in the past few months as many other art-lovers in the Inland Northwest have become more familiar with an artist who rarely showed her work, but who I believe Idaho will come to treasure.

Ellen agreed to arrange an introduction, and Sara invited me to her home in Genesee. A slender woman in her late sixties, wearing handmade clothes, she was a wonderfully quiet presence with a hint of mischief in her eyes. Her entire living space seemed to be a working art studio. Everywhere, tables were laden with books, art materials, piles of fabric, and artworks still in progress. I saw stacks and stacks of paintings on paper—a series on Genesee women. 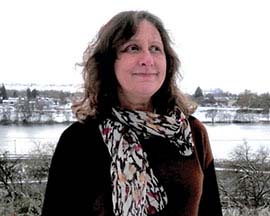 Sheila Petticord is a writer, editor, and lifelong student of the arts who has lived in Idaho for the better part of three decades. She and her husband share an apartment in Lewiston with their two cats, Teja and Simone, near the confluence of the Clearwater and Snake Rivers.
View all posts by Sheila Petticord →