Photos courtesy of the author

Ronny must have been almost four when he followed our dog Pete into the woods.

We lived on a hill outside McCall and much of the land spread around us was empty of houses or roads or people. Pete—who Dad said may have been part wolf—wasn’t fenced in or tied up, and devised his own backwoods adventures, sometimes returning home with his nose full of porcupine quills or smelling of joyfully-rolled-in dung.

The day Ronny disappeared, Mother called Dad home from work and his construction crew and several neighbors arrived to help search. It was coming on dusk when a man employed a mile away, at Quaker Hill Church Camp, telephoned to ask if we were missing a little boy who said his dad’s name was Joe Bayok. Years later, Ronny told us he wondered if he was lost, but he didn’t worry because he knew Pete would take care of him. His biggest problem was falling behind, but each time he called, Pete would come back to hurry him along, wagging his stump of a tail.

When Mother first let me hold Ronny on my lap in 1957, I felt proud. He was heavy and his fat-diapered bottom made him seem almost as big as I was. He rarely cried and never bit me, and he made Mother laugh. She said she found out right away how different raising a boy was the first time she forgot to lay another diaper on top while she changed him.

Even though I was three years older, I wasn’t as brave as Ronny. He liked to stand on our second-story porch railing to observe the countryside, and to walk across the top of the eight-foot-high wooden swing set Dad had built. He didn’t mind getting dirty and always was ready to run somewhere. After he learned to walk, Mother had to buckle him inside a harness when she took him outside and hold on tight to the leash or he’d be gone.

Mother was in her early forties then, and he wore her clean out as he pulled her behind him. Sometimes she tied his harness with a rope to the clothesline pole in the middle of our back yard. I can still see him gleefully airplane-ing around the pole in one direction until he ran out of rope, then in the other direction as the rope unwound. He thought it was a game made just for him.

Our sister Barbara, who was almost ten years older than Ronny, babysat the two of us, and he wore her out, too. One night my folks came home and found Barb sitting in her bedroom reading, as she rhythmically pulled a string tied to the big blue rocking chair in the living room where Ronny continued to sleep so long as she kept pulling the string.  Barb was good at solving mechanical problems, even those like an unstoppable little brother. 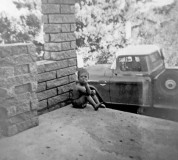 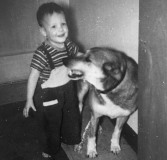 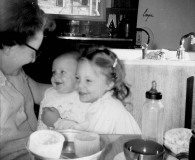 Ron Bayok on the family's back porch in McCall, October 1958. 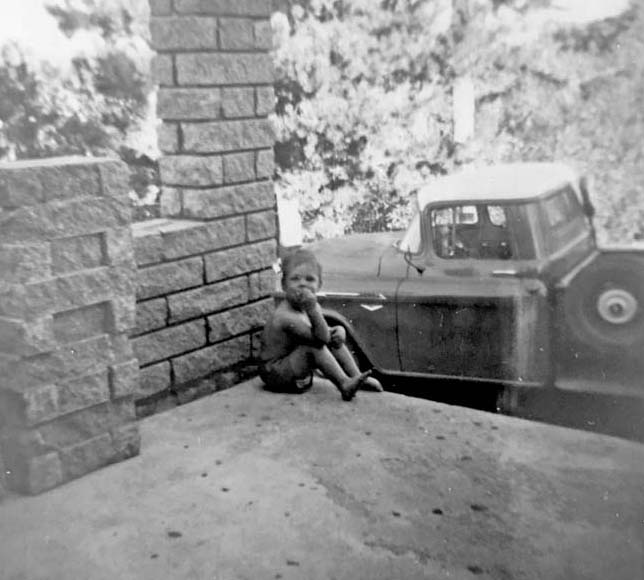 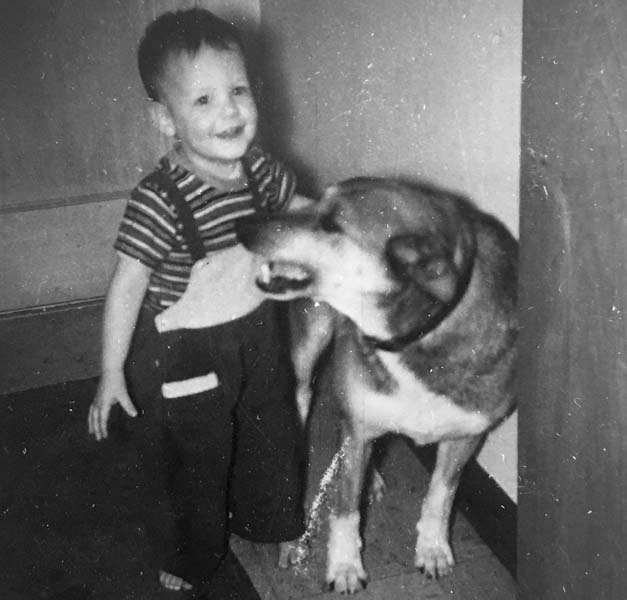 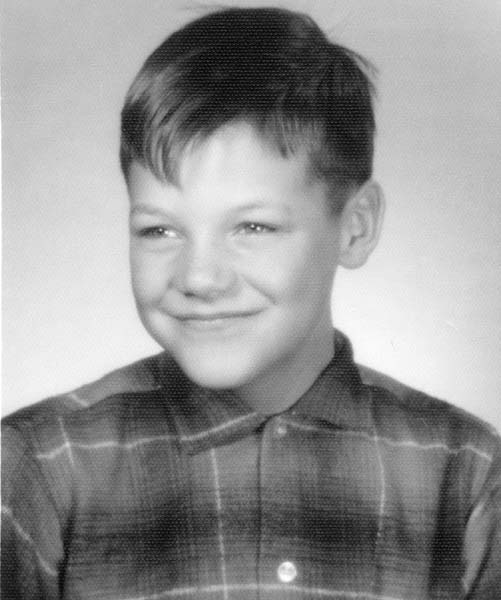 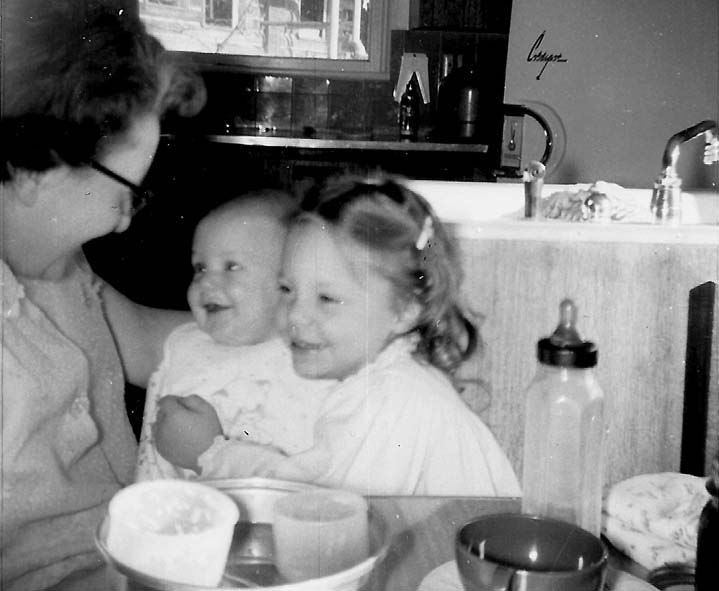 On snowy days, Mother would let us ruck up the living room rug, as long as we straightened it out before dinner. We’d shape the rug into hillocks and valleys, and drive toy cars on it, complete with motor noises. Ronny could make motor noises continuously as he breathed both out and in. I couldn’t do both, but I learned to buzz my tongue and lower lip together like an engine while I drove. We played wagon train inside the large storage cupboard in our parents’ bedroom, built forts with the silk parachute Dad brought home from the town dump (after Mother washed it three times), and fought off space invaders from our platform treehouse. When we got in trouble together, Mother plied a green plastic ruler to spank our bare behinds. As I recall, Ronny tried flushing the ruler down the toilet, and when that didn’t work, he hid it in the woods.

When he started kindergarten, he was supposed to get off the school bus at the babysitter’s, but one afternoon, without asking, he traveled home on the bus with me. After much discussion, our parents told us they thought we were old enough to take care of each other until they got home from work. In those years, houses in McCall weren’t kept locked, so all we had to do was walk home from the bus stop, eat our graham crackers and milk, and race through our homework. If he got bored, he dragged a kitchen chair over to the wall telephone so he could climb up and visit with the operator. He liked to hear her say, “Number, please.” Even when she asked him to hang up the phone, he wouldn’t. He knew she didn’t mean it.

As we got older, Ronny spent more time putting together model planes and cars, and building and shooting off rockets with other boys, but we still watched television programs together like Lassie and Roy Rogers, and later Star Trek. One of my favorite memories is seeing Disney’s The Jungle Book at a Boise theater with Ron—he was ten years old then and no longer answered to “Ronny.” I sobbed when I thought Baloo was dying, and though Ron looked as if he wanted to sit anywhere else than next to me, all he said as he stretched out the second word was, “Karlene, please.”

I still laugh when I remember.

Karlene Bayok Edwards grew up in McCall and graduated from McCall-Donnelly High School. She volunteered at the McCall Library and later had a thirty-four-year career as a school librarian. She earned degrees in English literature and library science in Arizona, where she and her husband settled. Now retired, she writes from the vivid memories of her childhood and from the Idaho backcountry stories told by her parents, Joe and Marcella Bayok.
View all posts by Karlene Bayok Edwards →
ORDER BY MAIL