Posted on by Angie Blake

A Potato Town Regarded Through the Looking Glass

Every summer in my youth, our family would pack our things, get into the vehicle and take a trip from Independence, Oregon to Pingree, southwest of Blackfoot. We were headed for my grandparents’ farm, where a family reunion was always attended by lots of people, with plenty of food and beverages. In addition to visiting with relatives, we helped out on the farm gathering eggs, milking cows, baling hay, and moving irrigation pipes, and we learned about family traditions. For me, it was a nice break from the hustle and bustle of city living, peer pressure, and school. I didn’t realize at the time how much all this would mean to me when I got older. I remember looking into the faces of my Italian relatives and recognizing aunts, uncles and cousins, but for a long time I didn’t really picture them as people who had lives of their own.

My father’s parents, Tommaso and Annunziata “Annzi” Rossi, had emigrated from Italy to America in 1951. By 1955, they had moved to their new home in Pingree and bought a farm, where Grandmother has been residing ever since. More than fifty years ago, my brother Marlon, Jr. and I were born in Idaho, but within a couple of years our dad, Marion Rossi, Sr., accepted a job in education in Monmouth, Oregon, two miles from Independence, where we were raised along with two more children. After we were grown up and had children of our own, our parents decided they were needed in Pingree to help take care of my father’s parents, who were getting along in years. They built a house on my grandparents’ land and resided there from then on.

Two years ago, my mother, Sandy Rossi, died of natural causes in her Pingree house. I hadn’t been to Idaho in thirty years. It was time I went home. 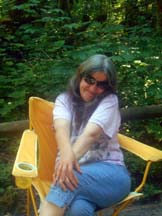 Angie Blake was born in Pocatello, moved to Oregon at a young age, and has lived there ever since. Happily married with three children and two grandchildren, she lives and works in Salem, where she likes to write mystery suspense books, poetry, and articles. She also enjoys camping, fishing, hiking, and photography.
View all posts by Angie Blake →